Yin and Yang of Teaching

"Do I smell something burning?"  Mariano rushed to the kitchen.  The water had evaporated under the veggies I was attempting to steam.  My first thought: he only gets up from that video game to criticize me.  But I knew that wasn't fair, or true.  It was one of those days.

I finished making the food.  "Come on guys, lets eat."

Only one of the three of them acknowledges me, to say, "No yuck, I don't want any dinner."

I didn't have the energy to be funny or cute or playful and pry everyone away from their interests to have a family dinner.  So I just said, "Fine, if that is the kind of family that you want to have, I'll just eat by myself."
But I don't think anyone noticed.  I sat to eat.  Shortly then started getting requests for help with things.  That's no fun, to be interrupted from dinner to get up and help someone with something stupid.  And if you decline or say something like, "When I finish eating."  The whining tide begins to rise.

I'm focused on my food and Mari notices that the little girl has been painting herself and tasting water color.  I tossed her in the bath and decided to check out for a bit.  Closed the door to the room and belly flopped on the bed. 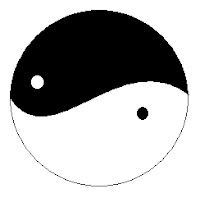 You know the sign for yin and yang?  The black half with the white dot in the middle and the white half with the black dot in the middle.  That symbolizes that within yin there is yang and vice-versa.  Within happiness there will be sadness or pain.  When things are going really well, something bad is bound to happen.  When things are going really crummy, a silver lining will shine through.  That's the law of yin and yang.  As good as I've been feeling in general lately, I completely expect to have bad days and times.

In this case it was a bad couple days.  Yesterday I went to bed questioning my parenting.  My kids don't know how to count, don't know their address, their birth dates, the days of the week.  They don't have interest in these things and I don't push them.  They turn on the tv and watch shows I think are dumb (like Barney) and I don't stop them cause it gives me a breather to study acupuncture.  I started to wonder if I could really be a teacher for them or if I'm too lazy, unprepared, self absorbed, and clueless.  But I also started to feel like the schedule we're operating under with them going to preschool a couple days a week and classes on other days is interfering with our active learning.  I started searching on the internet for ideas of what I could do to add more structure and learn how to teach them the things they need to know.  What are these things they need to know?  What's the process for raising a knowledgeable kid?

But it's all so much bigger than my little brain can handle.  I gave up and went to bed.

Today I hoisted myself off the bed, determined to reconnect with my idea of quality time. 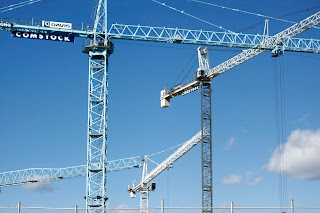 I kept Kaio home from preschool and took him to the site where they're building the new metro station.  I can't believe it's been three years of construction and we haven't visited here yet.  The vastness of the site blew me away. 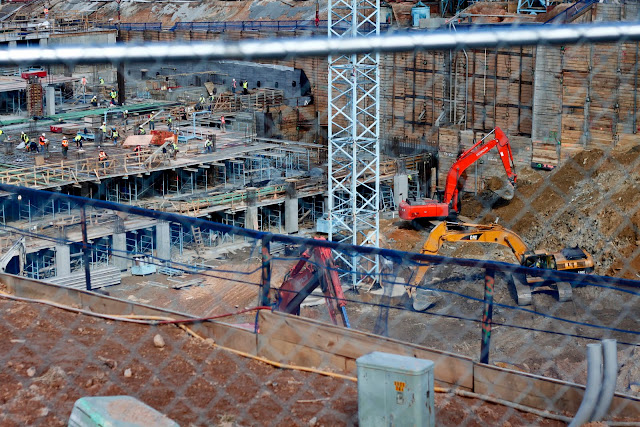 I brought our Lego Education book with pictures of pulleys and gears he's been using in his Lego creations and tried to point out other machines that use them too.  I noticed that if I talked too much or asked too many questions, it'd aggravate him.  So in general we just watched.  I think it planted a seed of interest and recognition, the link between his Lego devises and the real world of big machines. 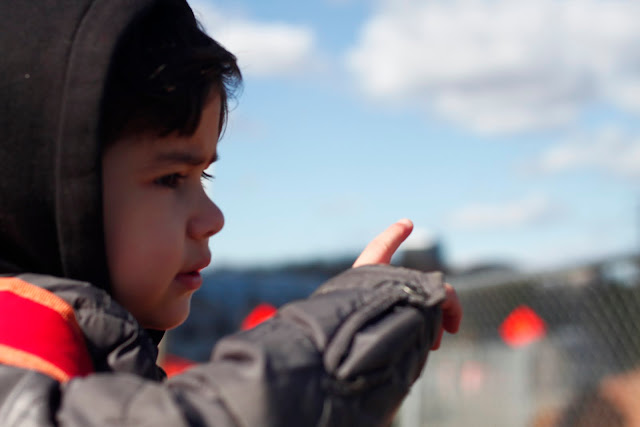 And man walked by us and took the time to say, "You know he'll never grow out of it: the fascination with machines." 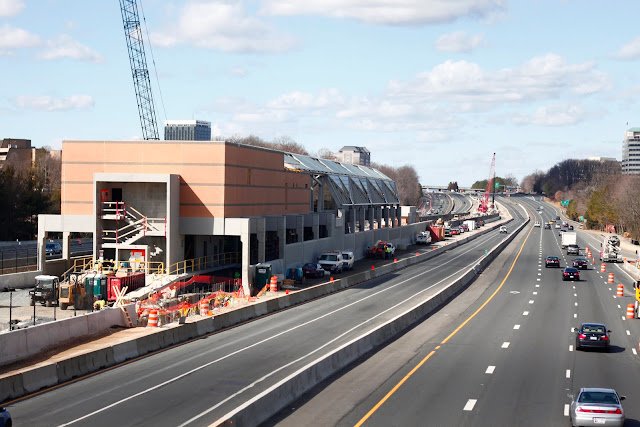 As I was fixing lunch, the kids teamed up with the Lego Education kit.  Kaio built a gyroscope and then wrote a program to activate the motor and launch it.  Nala would play and stop the program with the computer mouse while he held the top.  They did this totally on there own and I was so impressed. 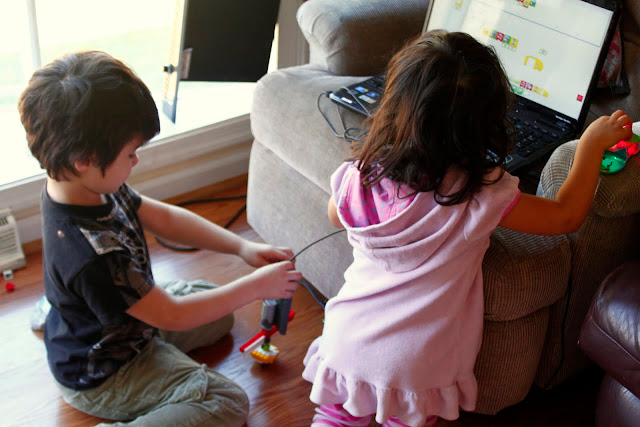 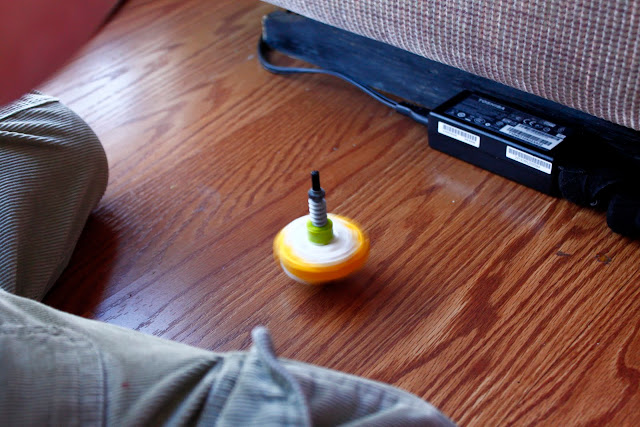 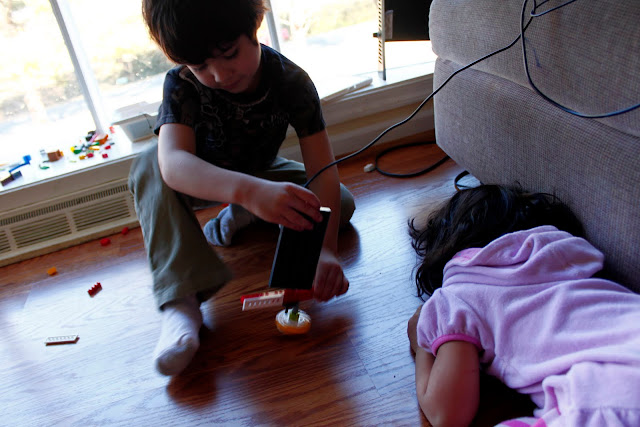 They kept playing and playing, I called them to eat lunch.  They didn't want to come.  I let it slide for a while but eventually started to get firmer about them sitting with me.  I didn't have the energy to be playful about it.  I resorted to threats.

Both kids came over and wrapped around me.  Nala planted a kiss on my check, then Kaio.  We got up and they followed me to the table.

I realized they're modeling me.  Since I've started studying yoga, I've really calmed down in how I handle situations.  Fights rarely escalate the way they used to.  When Kaio or Nala start erupting, I'll offer them a hug and comfort instead of getting sucked into the drama.
The ripple effects of my attitude adjustment.  Amazing.

It was a beautiful warm day out.  We went to the playground for some exercise.  And I love these little munchkins. 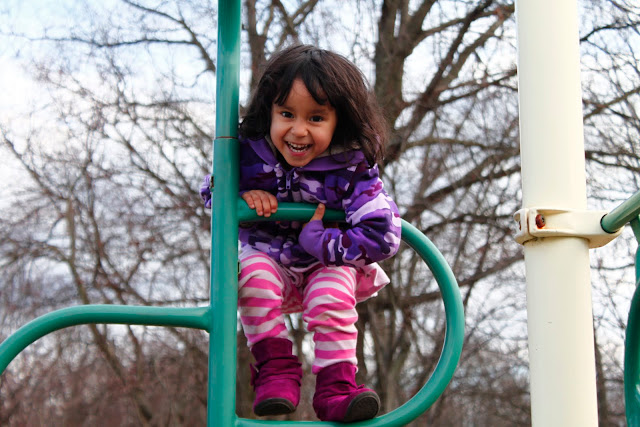 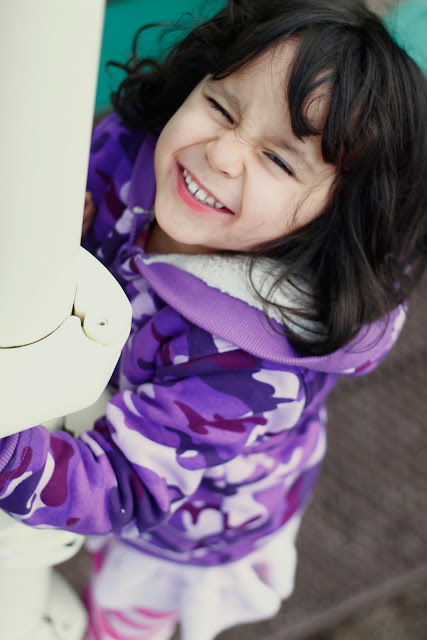 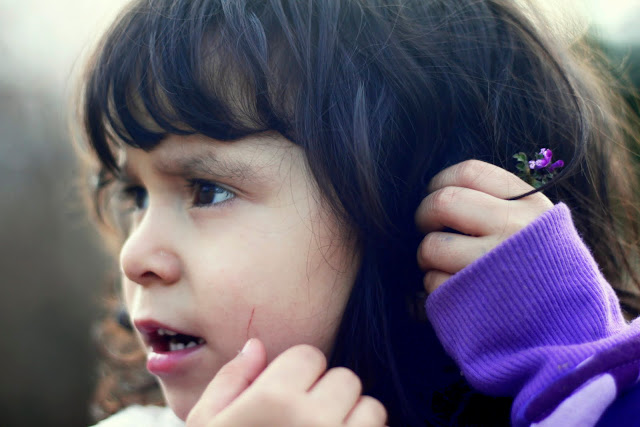 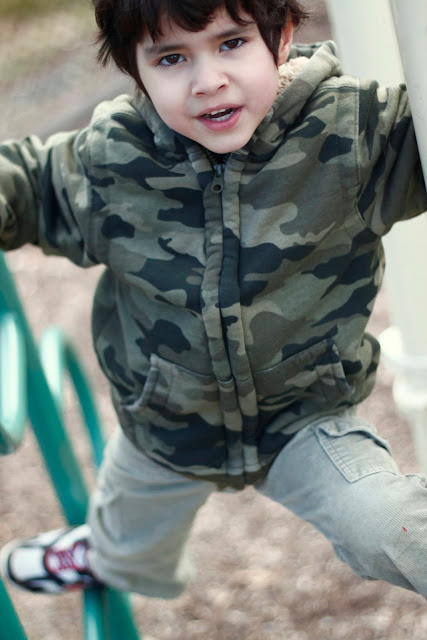 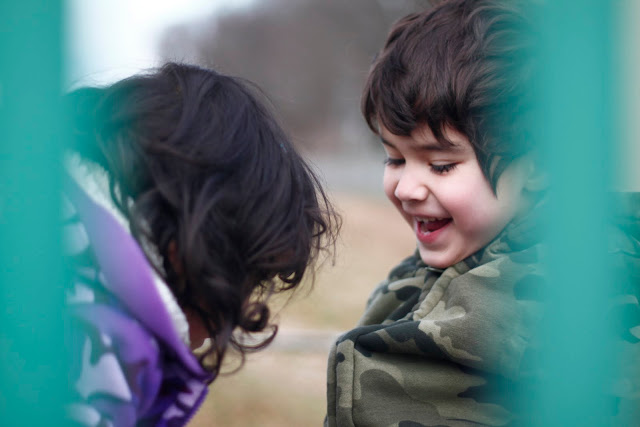 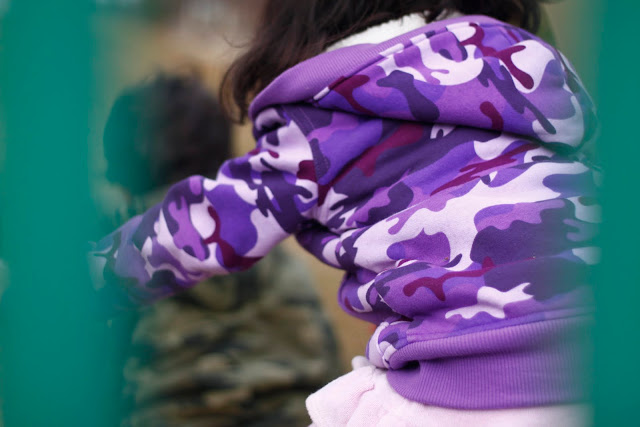 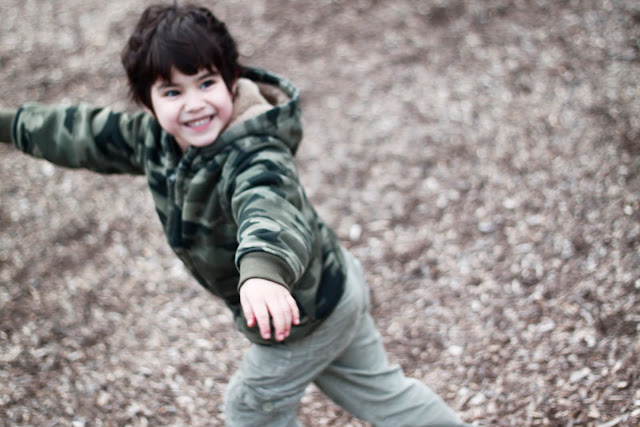 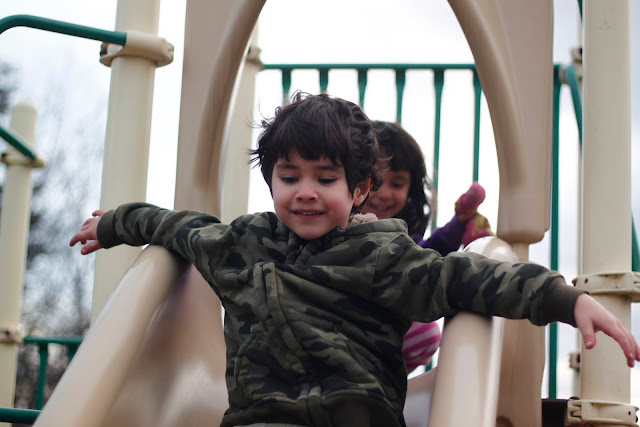 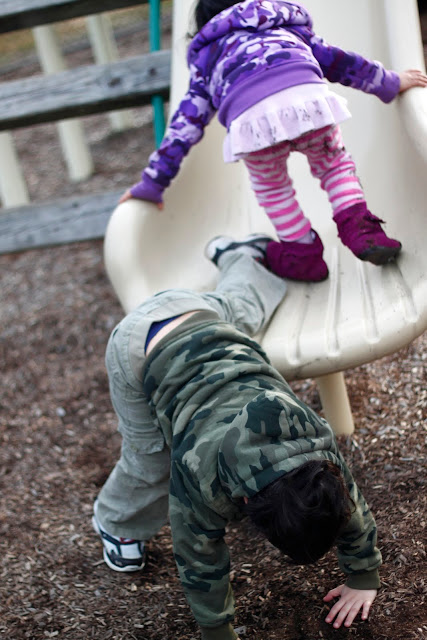 Then the evening.  Nala watched her beloved TV while Kaio and I played Angry Birds game. 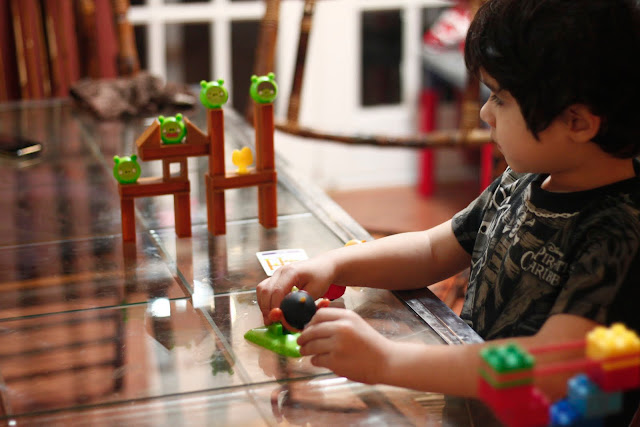 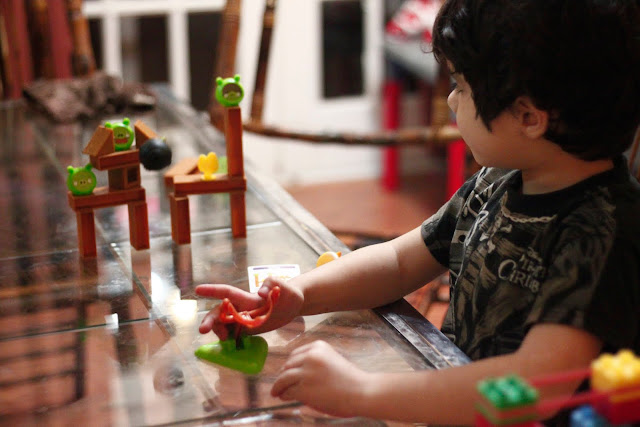 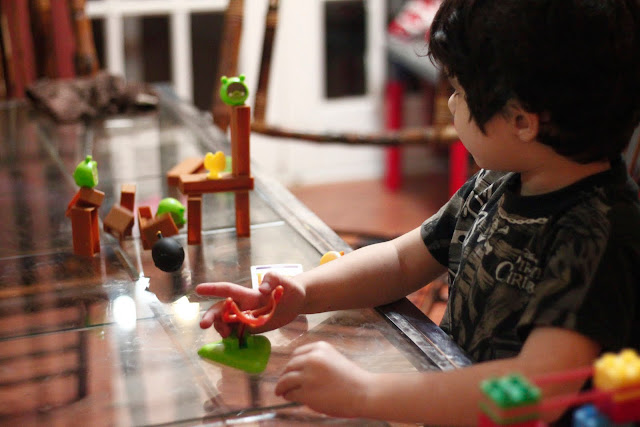 There's a point system involved and I tried to show him how 200 + 100 = 300 points.  Meh, he didn't care too much about the addition.  But he humored me for a split second and then back to demolishing pigs' houses.  At least he's interested in something cool.

So I guess I still don't know what I'm doing or what success looks like.  But I imagine that every teacher feels a little lost at some point.  And that even the most touted road map wouldn't work for every kid.  So you've got to feel things out as you go along and respond accordingly.  I just wish I had some guidance or a guru to go to and trust, someone to help explain the art of raising kids.

Well, till then...  I'll continue trying my best to keep them on the right track.  Whatever that means!