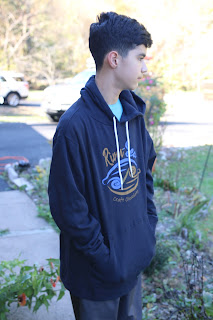 Kaio's slept way past his first class every day this week. He sleeps downstairs in the guest room because his bed is still covered in Halloween candy. First class in his virtual school day starts at 7:30am. He needs to just roll out of bed and walk over to the computer to log in. No one uses their cameras anymore. So he could take class half asleep, rolled up in a blanket. But he doesn't wake up. After the third day of this, I decided to take away his ipad, because it's keeping him up all night responding to tiktok followers, or gossiping about the Vegan Teacher. But then even yesterday morning he didn't wake up in time. Maybe his body just needs more sleep. Maybe virtual learning isn't real enough to feel like it matters. It's like the red light tickets that come in the mail, pretty easy to ignore until they eventually stop sending you bills. What, you don't do that?

Last night Kaio poured himself a big glass of milk, to try to make himself sleepy. Seeing him in the kitchen, fourteen years old, drinking that glass milk, it brought me back to 3am with him as an infant. I would nurse him in the rocker downstairs, and sing Bob Marley songs to try to get him to fall back asleep. I thought for a second of singing that to him now to help him sleep, but realized it would not go over well. 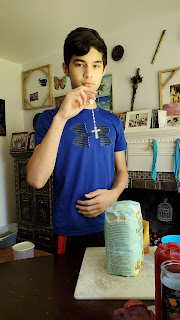 But with my memory of the past imposed on the present, I saw both Kaios side by side. Like a baby picture of him right next to a 14 year old picture of him. Or one of those tiktok videos that plays dual screen. Then present me asked past me if this was what I imagined being a parent would be like, if this was the kind of moment that I wished for when I wanted to have kids.  Past me didn't need to answer, because of course it is. Moments like that, in the kitchen together, drinking a glass of milk and chatting, those are the moments that make bonds and friendship, and make life worth living.

And then leaning on the frigerator, standing in an awareness that traversed time, I tried to imagine how it would be in the next 14 years, seeing him as an adult talking to me. I envisioned him big and broad like my brother, eyes like Mariano and with that same rambling excitement, talking about whatever it is that his is doing in the future.

I don't know if it will happen. I don't know if I'll get another 14 years with him. I sure hope so. I know that at 3am in that rocker, 14 years seemed a world away. And here I am, in the same place, still just trying to figure life out, confronting the challenges as they come, and not feeling like all the different a person than I was back then. And then I just felt really lucky to have made it this far, to have Kaio in my life and have gotten to spend 14 years with him.