I've been rolling along with homeschooling, pushing the reading and the math, slipping in little lessons around town and then checking to see if the kids are learning anything by bombarding them with questions about what I talked about - to verify that they are 'getting it.'

I've been trying to stock the ocean full of fish by jamming information into my son's head.  Then I wait in my boat, judging the waters, figuring out what net might work to catch them back.  But it's an ocean, and they keep swimming away.  I sit with my net, struggling to reel answers out of the turbulent waters of his brain, and once I muscle the fish out, it's the wrong kind.  Frustration.  I go back to the ocean, but the current has carried the fish elsewhere.

I've been feeling like I'm missing something.  I've sensed that there's a greater experience out there to be had.  Some greater purpose in each of us that shines out when nourished   So I checked out education books from the library by the bag full, seeking someone who had put to words down that I could relate to.

About two weeks ago I left on a Mon-Fri vacation up to a Radical Unschooling conference in North Conway, New Hampshire.  With only a tiny understanding of the unschooling tenets, I went to learn.  However, in the days leading up to the trip, I also felt I needed to get away.  After a week of fighting almost every day with my kids, I noticed homeschooling was turning me into an agitated person. I was spinning my wheels on slippery snow, not getting traction, and exhausting myself in the process.  I was threatening to put Kaio back in school almost every day in order to get him to cooperate.  "Oh you don't want to to tell me what 5+2 is?  Would you rather go back to school?"  He always gave in, because home is better than school.

A few days of a moms getaway to focus on learning about unschooling was exactly what I needed.  A mix of great conversation, morsels of thought provoking information at the conference, and the time to relax and think - digest my own history around learning and control.

The week uprooted my homeschooling approach.  No it uprooted my parenting approach.
Not because I've become a Radical Unschooler.  But because I touched something inside of me that's been clouded through the years.  And I'll write more about all that later.  There are layers to break down and explain.  But now, I want to focus on some of those tasty morsels from the conference that really struck a chord with me.

Testing Children is an Invasion of their Personal Freedom
When Dayna Martin, Radical Unschooling Author, said this to me: "I think that making kids tell people what is in their brain is infringement on their personal rights and space.  Why should you be forced to tell anyone what is in your head?"  it went over my head.  Testing kids is such a given, I'd never thought of it as more than a pain in the butt stupid No Child Left behind mandate to micromanage teachers.

Then at home I told Mari what she said. expecting him to laugh with me about how crazy these unschoolers were.  He took my hands and with big excited eyes said, "Yes! Now you're getting it!  See you're on the right track.  This is what I'm talking about!"  He's always been the biggest homeschooling supporter.

The more it sits with me, the more I see how all my inquisition, "How many ducks do you see in the pond?  What's two oranges plus five oranges?" was forcing Kaio to unwillingly give me a piece of him, and making him feel violated.  And I know that sounds extreme  but I do think he was feeling violated   The way he always reacted to my questions: he'd close up, look away, run away, beg not to answer...  It's strange, but I see now that it is his knowledge, and I don't need to quiz him on it.  Now he can excitedly share with me what he wants to tell me without worrying that I'll judge his answers as wrong or right.

One set of parents at the conference told a story about their 5th grade son who had been unschooling for two years now.  They decided to take him out of school following years of troubles, with IEPs, the school principal, psychologist, teachers, counselors - a whole team of professions working to get their boy on track.  At the last straw they described a meeting with this team of adults all bombarding the boy with, 'why wont you apply yourself?' type questions.  He sat slumped in a chair, a black hoodie over his forehead shading his eyes, and refused to talk.  His mom began researching unschooling.  At the conference, two years later, I saw this boy speaking during the kids' panel.  He introduced himself and excitedly pointed to his mom in the crowd.  There was no hoodie, no shield up, his curly hair flapped freely and his face gleamed with vibrancy.  And I saw Kaio; how he shuts down as I beg him to answer me.  What is it all for?  Why do I keep bugging him?

It all comes down to me not trusting that he's learning.

Trust.
Even without knowing much about unschooling, I knew that it required much more trust than I was comfortable with.  But I found myself gravitating towards learning more about it because I knew that it was an unstructured approach to homeschool, and Kaio balks at structure.  Board games, circle time, prepared arts and craft activities, even those fun games at birthday parties just aren't his thing.  Unschooling is all about trusting that kids are natural learners and through their curiosity they'll learn about the world.  With Kaio, it's hard for me to trust that he's learning.  He's such a space cadet, he forgets things and doesn't explain himself very well verbally.  So trusting that if I just let him play with legos all day long it will eventually lead to him understanding american history and division, is like jumping off a cliff and trusting that there is a ledge to catch you below.  I just didn't know how to find that trust for the natural learning process because I hadn't seen much evidence of it.

I was being too harsh.

At the conference Scott Noelle, from enjoyparenting.com, said something that stuck with me: "Trust isn't about whether you can trust your kid to do what you tell them to do.  It is bigger than that.  It is trusting in their unique spirit.  It is trusting in nature."  With that I began to trace back to the times I'd been reprimanded for running away from my parents.  I was not purposely being bad.  My nature, my personality, was exploratory.  I needed to try things and to experience everything for myself.

I can trust in nature.  I can trust that plants thrive with water and sunlight.  Kids thrive with love and support.  Nature finds a way to grow despite challenging climates.  At one point my kids were the little sperm that beat out all the 180 million other guys.  That's pretty amazing to think about.

Life Can be All Fun and Games
I don't know why I fought this.  In highschool, I had the answers to life.  I knew that life wasn't waiting for tomorrow, or living bored.  I knew that I would always be finding ways to travel and follow my interests.  I never thought I'd settle or turn dull.  And I haven't.  My capacity for pointless tasks is really low, and I think that's a positive trait.  I find ways to get what I want out of life, I only engage in boring things when I see directly how those actions lead towards a fun thing.  For the most part, I have fun.  There are rough days, but I can't complain, more or less - my life rocks.

So what's the deal with me being so stuck on filling the days with teaching facts to the kids, forcing them to do things that they don't want to do just because it is the school track?  My own interests in life have always driven my ambition and accomplishments, sometimes hacking through unconventional routes.  Why can't I trust that the same would be true of the kids?

I decided the most important thing right now is to connect, wherever they are at.  I will keep loving them and challenging them and supporting them.  We'll see where this goes.

Saying out-loud that formal education doesn't matter to us right now, sets me free.  I feel like I stepped out of the matrix. 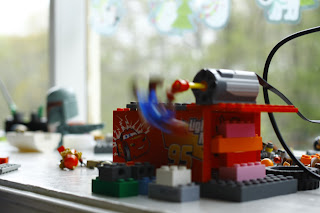 Yesterday Kaio built this:
It's a spiderman swinging back and forth over lego cars.  Spiderman is attached to a motor, connected to my laptop.  I helped him make a program for the action he needed.

There's a wii video game that's really over his head age-wise.  It's targeted to teenagers.  A friend offloaded it on us and Kaio's been trying to play it but getting so frustrated because he couldn't figure out how to beat the first level.  There's tons of reading involved and he doesn't know how to read.

Well I caught him on the computer watching video walk-throughs of the game.  He typed the name of the game into the google search bar and then spent a few hours over two days studying youtube videos dudes had uploaded. 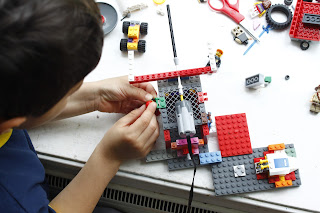 Today he turned on the game and immediately concurred the first level, then the next and the next.  When I got home from class today he had beaten most of the game.

I know most parents don't like it when their kids play video games.  But I see a kid who is demonstrating an ability to be resourceful, driven, and persistent. 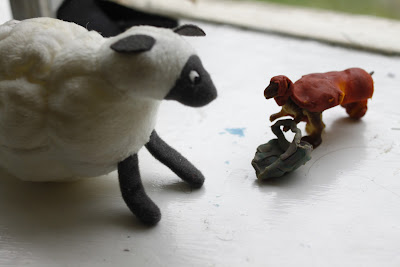 Nala used clay to make the dinosaur into little red riding hood.  The sheep is the big bad wolf.

Our living room bay window overlooks the yard.  Kaio made a blue jay, gold finch, and cardinal out of legos.  Nala drew them, and made clay birds.  They wanted to set everything up as a museum exhibit. 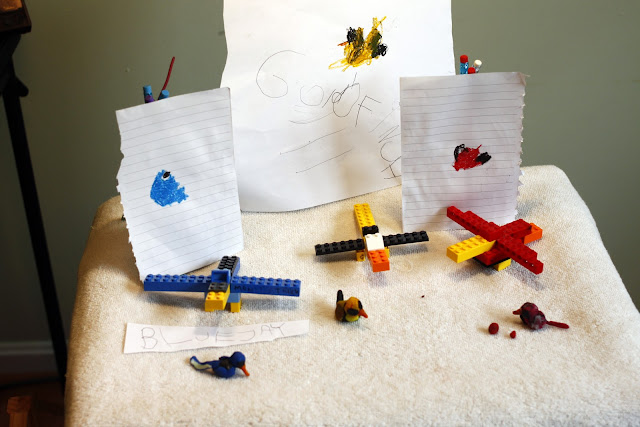 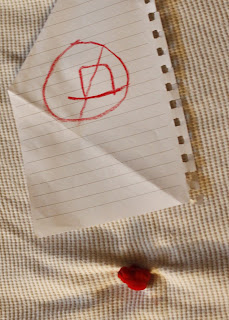 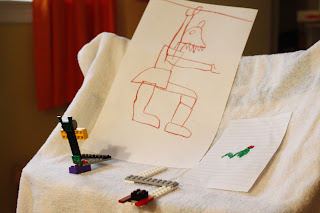 Complete with button that you're not supposed to touch.  If you touch it, the creatures will come to life!


All we do is have fun.  And I could be happier than a pig in shit to recognize that.  It means pushing my preconceptions of what we're supposed to be doing out of the way. 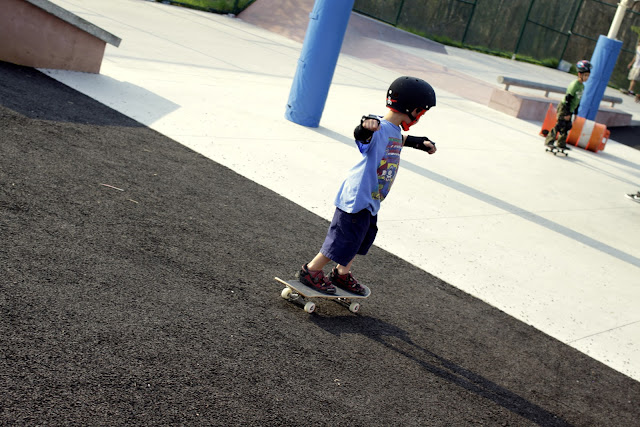 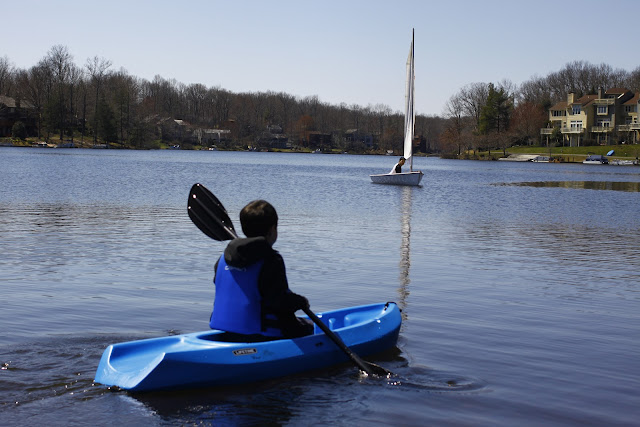 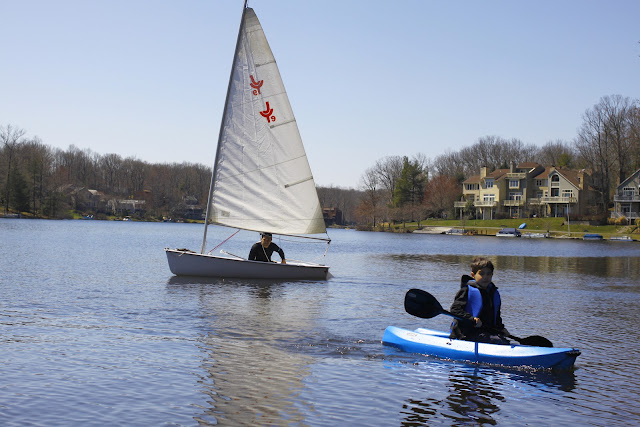 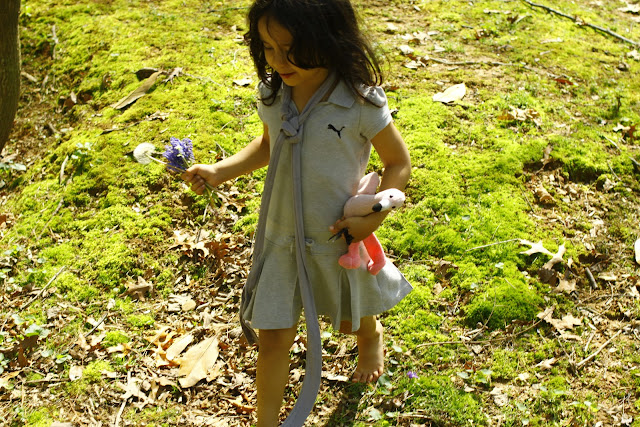 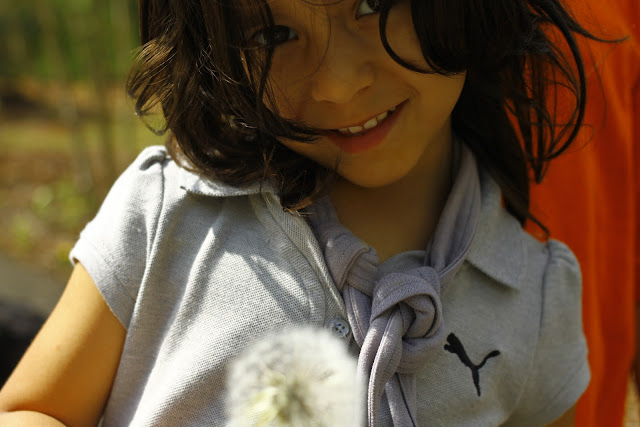 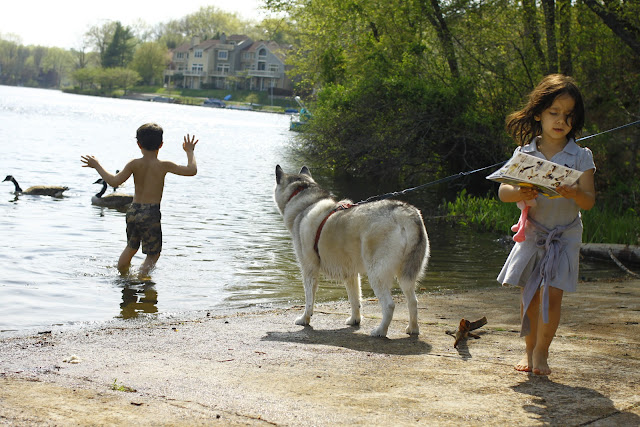 Cause after all, what does it matter if the bouquet is made out of weeds?

The yoga sutras speak on the causes of suffering.  One of these is avidya: not seeing things as they are. ignorance.

Is it fitting that my daughter is ignorant to the fact that these flowers are weeds, and that frees her to enjoy them for what they are. They ARE beautiful flowers.  Who decided dandelions were weeds anyway?  I love my spring yard speckled with wild dandelion and violets. 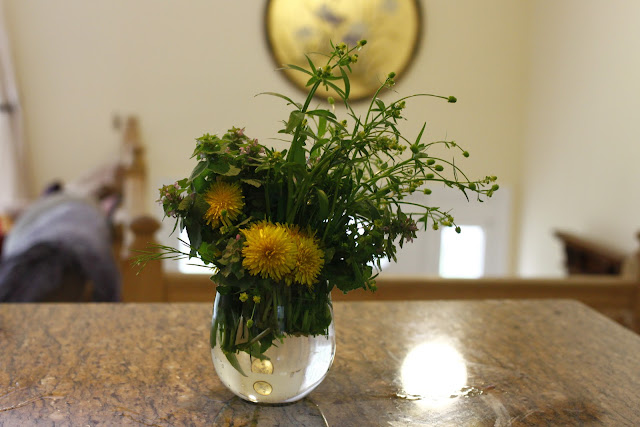