Caring About What Other People Think

Yesterday Nala came to me with a multicolored crown made out of pipe cleaners.  She presented it proudly.  The flimsy little thing barely fit on her head and kept falling off.  But she seemed happy about it.

Then the wind changed and she turned very upset.  Which for Nala means she curled up behind a stuffed animal on the floor with a frown on her face and droopy eyes.

"My crown looks funny." She said with a sigh.

"But I thought you liked it."  I replied.

"I like my crown, but I think other people will think it is funny looking." 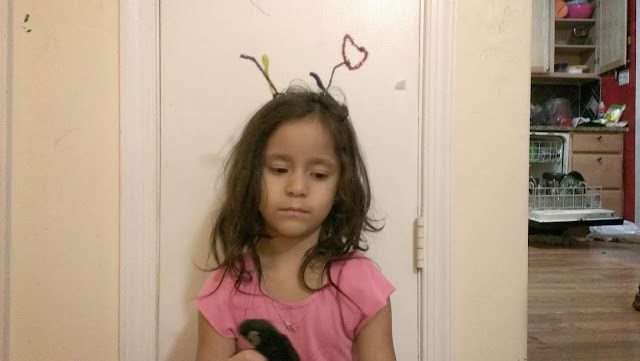 This became a conversation worth writing about, because it's really the first conversation we've had like this yet.  In such an innocent and virgin way, she expressed this social pressure that we all feel all the time, every day.  It's like she has become self aware of the difference between herself and others, and actually cares about how they will evaluate her.  She's worried that what she likes and does isn't good enough for the rest of the world.

Where does she pull this from?  Before it seemed that she could wear the weirdest things; as long as it was her style she'd wear it proudly.  But now, she suddenly feels something she likes isn't cool enough.
As teens and adults we shelf what we like because we know that we'll be judged for it, eventually that action becomes habitual and unperceived.  Have you ever been ashamed of yourself for a product you created?

I remember in 5th grade, the first year I went to public school, I wore a really silly outfit on 'Funny Outfit day.'  I had a plaid skirt with a tie as a belt and mismatched knee highs, a poka-dot shirt and pigtails.  I thought I looked so perfectly funny dressed and cool.  I expected everyone else to be dressed outlandishly too.  But, nope.  Maybe somebody had a funny hat on, and somebody else had their shirt on backwards.  Kids in the class laughed at me and I felt like a dork.

This summer Kaio took a skate boarding class.  He's not usually the type to care about style, he'll wear Nala's shoes out of the house if he can't find his.  But for skate boarding class he picked out his clothes.  He wouldn't wear any Spiderman shirts, which at the time were his favorites.  When I asked him about it he stated very firmly with a hint of distress, "I can't wear those."
I tried to smooth out stress and replied, "Of course, we wouldn't want the world to know your secret superhero identity."

But I sensed that this new fashion selectivity had something to do with the older kids at the skate park and what they were or were not wearing, or perhaps a comment he'd overheard an older kid make about a younger kid's Spiderman shirt.

"Does that bother you if people think it is funny looking?" I replied.

"Yes, because they will say it is funny looking." She continued with a weak voice.

"I don't think your friends will say that."

She started to perk up.
Friends love the things you make no matter how funny looking they are because they love you and your heart on the inside. 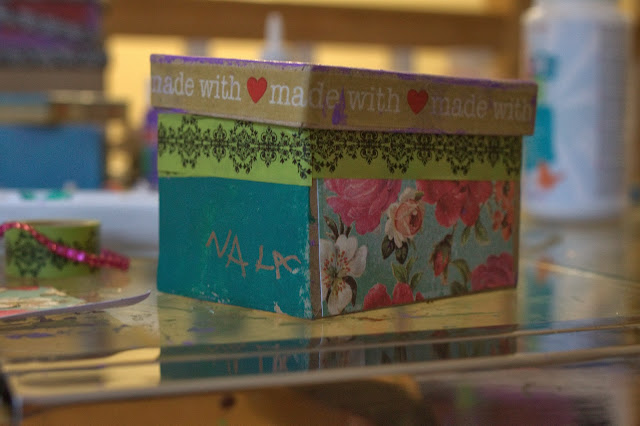 A Box Nala Made with Decoupage