We chugged down the meandering mud colored river.  The hot jungle air made us sweat as we sported long sleeves to protect from mosquitoes.  It was hard to believe that just a few days ago we had been trekking atop a mountain 14,000 ft high.  But that's western South America, coast to mountain to jungle in a mere hundred miles.


The next day began with more fishing. Artiso gave the order, "Vamonos!"
His lanky, very young and tan boatman started the motor.  We'll call him Inti.


After an hour or so Artiso gave the hand wave, signaling to cut the motor, he'd found a sweet spot.  Drastic silence thumped down.  We drifted as Artiso and Inti prepared the net.   The net, aged and mended throughout.  I wondered how many tears it would need to have before he would buy a new net.  Would there ever be a case, or would he continue repairing this one until it withered away?

Artiso cast the net from one bank of the river while Inti paddled us slowly across.  Artiso draped the net in the water, creating a wall of net suspended by styrofoam floaties.  We sat and waited, mostly quiet, in patient reflection - you know: fishing.  The sounds of the jungle hypnotic and soothing.  The air so still and hot I wanted to beg to carry forward so we could feel wind.

Eventually some floaties danced and Artiso took to haul in the net.  I could see the four foot silver fish shaking as he wrestled it into the boat.  The fish wiggled and bucked, entangled.  Just stuck,  dude was stuck.  Ellen and I watched from our dugout spot in the center of the boat, not moving, not talking, just watching.  His little eye peered without blinking, without screaming or barking, just staring blankly.  Like a face glued calm while the body expressed wild confusion. 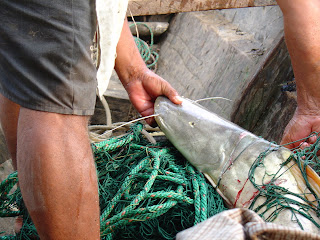 Artiso clamped the great fish's mouth shut and tried to free him from the net, inflicting as minimal pain as possible, without cutting or compromising the net - of course.   It seemed to me like it took forever to free that poor fish.  And when Artiso finally succeeded, he tossed the jerking body down next to his bare feet, and there he stayed, on the floor of the boat, life slipping away.

The motor cranked and we headed further down stream to the next spot.

At our next point the net caught on something submerged under the opaque water.  After so many unsuccessful attempts pulling, turning the boat and pulling from another direction, pulling and loosening and pulling again; eventually it came to the last straw.  Of course they wouldn't dream of cutting the net.

Inti knew it was his job to jump in and help,  literally.  I felt so bad for this kid, a nice looking 14 year old with nerves of steal.  He was one tough cookie who'd put my 14 year old self to shame with his courage and work ethic.  Well Inti hopped into the water with a Bowie knife between his teeth and duty in his eyes.  He held himself on to the side of the boat for a second before gracefully dunking his head down under.

I have no idea how he could see under there or how he manged to detach the net blindly.  Nothing could have gotten me into that muddy water.  I was so scared of piranhas, dog fish, and who knows what other carnivorous creatures.  I'd swam in river water before in Brazil, but nothing so murky, and almost always with pink dolphins around (a sign that the area is safe).

Inti emerged from the water, soaked, dripping, calm and collected.  Like a young Crocodile Dundee.  He explained the net had caught on a large branch from a submerged fallen tree.  usually trees float, but I guess this one was stuck somehow.  I guess the river was not very deep at this point.

Artiso caught two large fish that day and he seemed unsatisfied by this.  He dropped us off at a small river side rest stop of only 6 houses.  The plan was to pick us up again in four days, after he had time to catch and sell some more fish.

And that's when the unexpected adventure really began.  Continued in Hitchhiking Girls (Pt.3)
at 1:10 AM