The Magical Connection of Very Young and Very Old 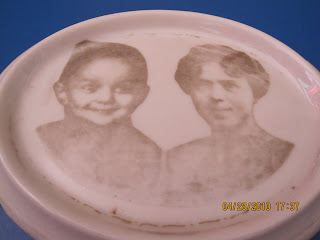 A snap shot of a photograph printed on a plate.  My mom recently took this picture on he trip to Romania this year to visit family.  The woman on the right is my Great-Grandma, and the little boy on the left is my mom's brother.  He had Leukemia, and they both died together in a fire when he was three years old.  It is pretty tragic.  And I feel a little bad writing about tragedy on this blog because I'm sure everyone has enough to deal with and no one particularly wants to hear another sad story to bring them down.  But I need to get this off my chest and chronicle the family history in a safe spot.  So ignore if you please.
My mom says that Kaio reminds her of her brother; so animated, sweet, and happy.  And that her grandmother loved her little brother so much.  They were inseparable.  When the fire started, he was playing by her feet in the kitchen, which is where he always stayed.  They say that she tried to dowse the cooking fire with oil.  Totally what you are not supposed to do.  But my Great-Grandma predicted that she would die with him.  Or said that she didn't want to live without him.  So it turned out to be a self fulfilling prophesy. 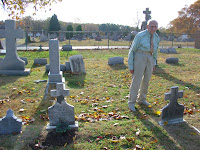 And here is my grandfather, Tata, at a graveyard in Trenton, New Jersey.  This is where he is buried, where his wife is buried, and where his bothers and sisters - who died as children - are buried.  Five of his siblings died of childhood diseases during the short period that they lived in the United States.  That was in the 1910's.  They moved back to Romania in 1920, when my Grandfather was five years old.  Only he and one younger brother lived into adulthood. 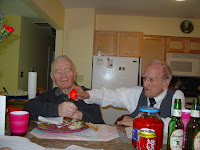 At then here are the two brothers, Easter 2006.  The last Easter before Sabin passed away.  My grandfather followed in 2008. 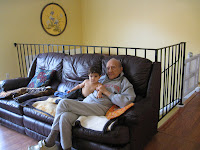 As Tata's health began to dramatically fade in 2006, I prayed that he would hold on until Kaio's birth.  He made it, and lived for a year and a half longer.  Seven of those months we lived in the same house together.   They had a cosmic affinity for each other from the beginning.  Since the day Kaio was born, he brought life and love into Tata's aging soul.  I remember that Tata would just look at him and laugh at everything that baby Kaio did.  He would give him his pacifier if he dropped it.  he would come to help if he heard him crying.  One night, when Kaio was 4 months old and crying in his crib, Mariano and I were obviously too sleep deprived to wake up, Tata went into Kaio's room and somehow was strong enough to lift him out of the crib and rock him back to sleep.  I came into the room later in the night and Tata was still holding him.  It was so sweet to me, but it frightened Mariano because Tata was suffering from dementia and shouldn't be holding Kaio without supervision.
Actually Tata didn't know that Kaio was my baby.  He always called him Mikey, referring to my little brother Micheal.  And if both Micheal and Kaio were in a room together, Tata still didn't get it.  He would just brush his hand at the thought that the baby was anyone other than baby Mikey.
Kaio would crawl to him, sit in his lap, kiss him, and play with him.  one day when we visited Tata in the hospital and Kaio saw him in pain, well that was the most upset that I ever saw baby Kaio.  I feel blessed that they were able to connect.  And although Kaio was too young at the time to remember, and Tata too old to understand, there was something profoundly magical about the connection they shared together.  The connected in the purest possible realm of existence, where their spirits danced and no words or actions were needed, only a look, a laugh, and maybe a tickle.  Witnessing this is what drives me to believe that children and elderly need to play together. 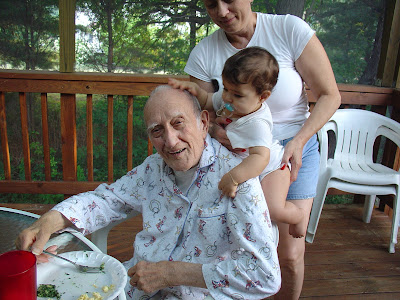