Sunday morning Kaio woke up at 9am in bed next to Mari and said, "Papa, my pinto (penis) is growing."
Mari, "yeah Kaio, papa has that problem too." 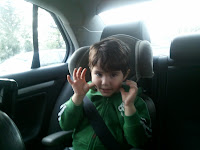 I seems our little boy is turning into a man before our eyes.  This week he started his new preschool program.  Despite my reservations, we decided to go ahead and put him in the county's morning Special Education program, and team that with a Montessori school in the afternoon.  Here he is on the way home from his first day in the public education system.  We decided this because the outdoor Reggio Emilia school that I loved, was just a little too out of the way to choose it over the very close and cheap options next door.
Side Note: My ultra-conservative Tea Party brother *loved* hearing that we were taking a hand-out from the government instead of financing our kid's education with our own money - just because the government was offering.
If we are still in the area next year, then we'll probably send him to the Discovery Woods Reggio Emilia school.We loved it!
Well now, he is a big boy.  We went shopping to try to find a Thomas the Tank Engine backpack, but no local stores seem to sell backpacks after back-to-school week.  I had to order one off Amazon.
The school bus is going to start picking him up this week, but today I had to drive him.
I went to pick him up midday to take him to the Montessori, but I must have got there late because the teachers put him on a bus to the school.  I frantically hauled my butt to the Montessori, really hoping that I would beat the bus there. I did and he was so happy to see me.  We walked into the hectic preschool, lots of kids were getting ready for nap and this scared him.  Inquisitive kids hovered over him, repeatedly asking us questions, "Why doesn't he want to lay down?  What's a new place?"  "Why does he want to go home?"
I could tell that he was getting very nervous and anxious.  I asked him if he wanted to take a nap or go in the classroom. He wanted to go in the classroom and so we did.  There were older kids siting around a mat for story time.  Kaio sat on the mat but turned away from me.  I told him I would be back after work.  He did not even say goodbye.  He was mad at me for placing him in such a frightening situation.
I went back to work and fretted about him the whole time. 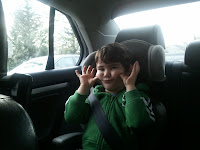 After picking him up, I learned that he ended up opting for the nap eventually.  He seemed to really like the place and the kids.  Then in the car ride home he acted so much more mature than usual.  After I took this picture of him 'smiling' he asked if he could see the picture, so politely.  Only the first day - but it seems that moving out of the hectic daycare, and into the preschool with kids his age, is what he needed.
at 11:06 PM