So I took the kids to a holistic doctor yesterday to see about detoxing heavy metals out of their system.  I've been feeling so great since getting the metal out of my mouth that I though they might have some residual mercury accumulated in their system from their time in the womb and nursing.  I had a lot of fillings: 9.  And a couple of them were cracked while I was pregnant.
So I went to see this doctor that my dentist recommended.  She had planned to hook the kids up the Asyra system to scan their bodies for chemical imbalances, but the kids were afraid of the metal rods.  Nala wouldn't touch them and Kaio wouldn't hold them long enough.  So then she starts muscle testing me to come to the conclusion that Kaio has liver problems and this all boils down to too much sugar in his diet.  The key to them detoxing is to take the sugar out of their diets so that their livers can function properly.

I was like, 'What? seriously?'  We eat really healthy.

I had given the kids little snack packs of Annie's Fruit Gummy Treats to keep them occupied while we talked.  She showed me the back of the pack - 10 grams of sugar - "That is too much."

Ughhhhhhh.  I was pissed.  I couldn't hide how pissed I was.  I kept thinking, seriously I'm paying $200/hr to have this doctor tell me that we have to take another thing out of our diets.  I think that these doctors just come up with some really impossible unattainable thing so that they can blame you for not following the regiment if it doesn't help.  Like, lets take out the gluten, then the dairy, then the sugar, then the starch... what's next? Oh your bath water is not filtered.  it never ends.
and the muscle testing.  I just don't get it.  Really? - Pointing that machine on my hand is going to tell you something diagnostic about my kid over there?  It just seems like complete quackery.  So when she brought out the muscle testing and told me to take the sugar and starch out.  I was mad.  I was ready to leave.

But I decided to stay and argue a bit.  My kids eat so much less sugar than other kids do.
1. Why should I alienate them from the rest of their friends, who are doing just fine eating tones of sugar?
- it is all about accumulation of toxins.  If the kid's body does not have other toxins that it is dealing with then it is able to process the sugar.  But if it has been exposed to other toxins (like metal fillings, vaccines, mold, etc) then the kids will get sick more often.

2. I ate lots more sugar than my kids do when I was growing up.  My parents used to give me M&M's.  I turned out fine.
- Things were different back then and children are exposed to many more pollutants in the environment.  Now-a-days children are born with over 200 different carcinogens in their blood.  Their bodies have a lot more to deal with.  Also the vegetables we eat are not as nutrient rich as in the past.  Now, with the use of fertilizers, vegetables that grow lack the variety of vitamins that existed in mineral diverse healthy soil. 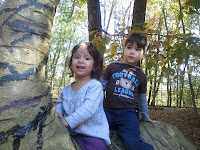 3.  But they love fruits, and fruits are raw.  That has to be good for them.
- Eat seasonal fruits in moderation.
4. If I keep them from eating the snacks that the other kids have at daycare, they think that they are being punished for something.  At daycare they eat yogurt, rice crispy treats, cookies, and pretzels.  Even healthy substitutes have sugar, like those Annies Organic Fruit Snacks
- Give them healthy, but similar options as much as you can. Focus on totally taking out the sugar at home.  That way they can easier detox it when they get it at daycare.
- Try it for 2 weeks and see what happens.  You will notice a change I promise.

So I can't argue with that.  It does not hurt to try it.  "Ok, I can try taking the little-bit of sugar that they have in their diet completely out for two weeks."
And that's what we are doing.  I called my mom, and talked to Mari.  They are both on board.  Although my mom gave me a lecture about all the wacko doctors I frequent!  "I don't understand why you are always taking them to these crazy people.  They are not real doctors."  But she quieted up as soon as I pointed out that our kids are the healthiest on the block.  Nala has never had to take an antibiotic in her life.  Kaio, only twice, and he probably would have been ok without them (but I was a scared new mom).  Kaio has not been sick at all with more than a quickly passing cold since we took him off wheat and dairy.  The kids are incredibly healthy compared to the kids of our mainstream friends and coworkers.  Kaio had a friend, the same age with the exact same coughing problem two years ago.  They were both prescribed nebulizers and inhalers.  For Kaio, we identified the carpets as a trigger and replaced them with cork. We took out the wheat and dairy.  Now he is fine for a whole year not coughing.  The other child has been hospitalized three times already.
So I know that we are doing things right.  But I also recognize that Nala has started acting odd and complaining of things hurting at night.  I was worried about her contracting Lymes, since she has been bitten by 3 ticks (one deer tick).  This doctor said that she is really nutrient deprived because all the sugar she eats is preventing absorption of vitamins from the healthy food. "She may eat tons of healthy food, but her body is not absorbing the minerals.  She is vitamin starved.  Take the sugar and starch out and she will improve."

Ok so we are trying it.  But with Halloween coming, I think this is going to be really freaking difficult.
at 11:33 AM