Joining Mid-Year, with Blue Hair - Back to Public School

This fall and winter have been full of changes.  We welcomed the sweet baby girl, Tori. Nala began Kindergarten, and Kaio went back to public school.  I've been reluctant to write about Kaio returning to school on social media because I'm a bit embarrassed.   Partly, I see it as a declaration of my failure as a homeschooling mom.  But so far it seems it was the right decision. 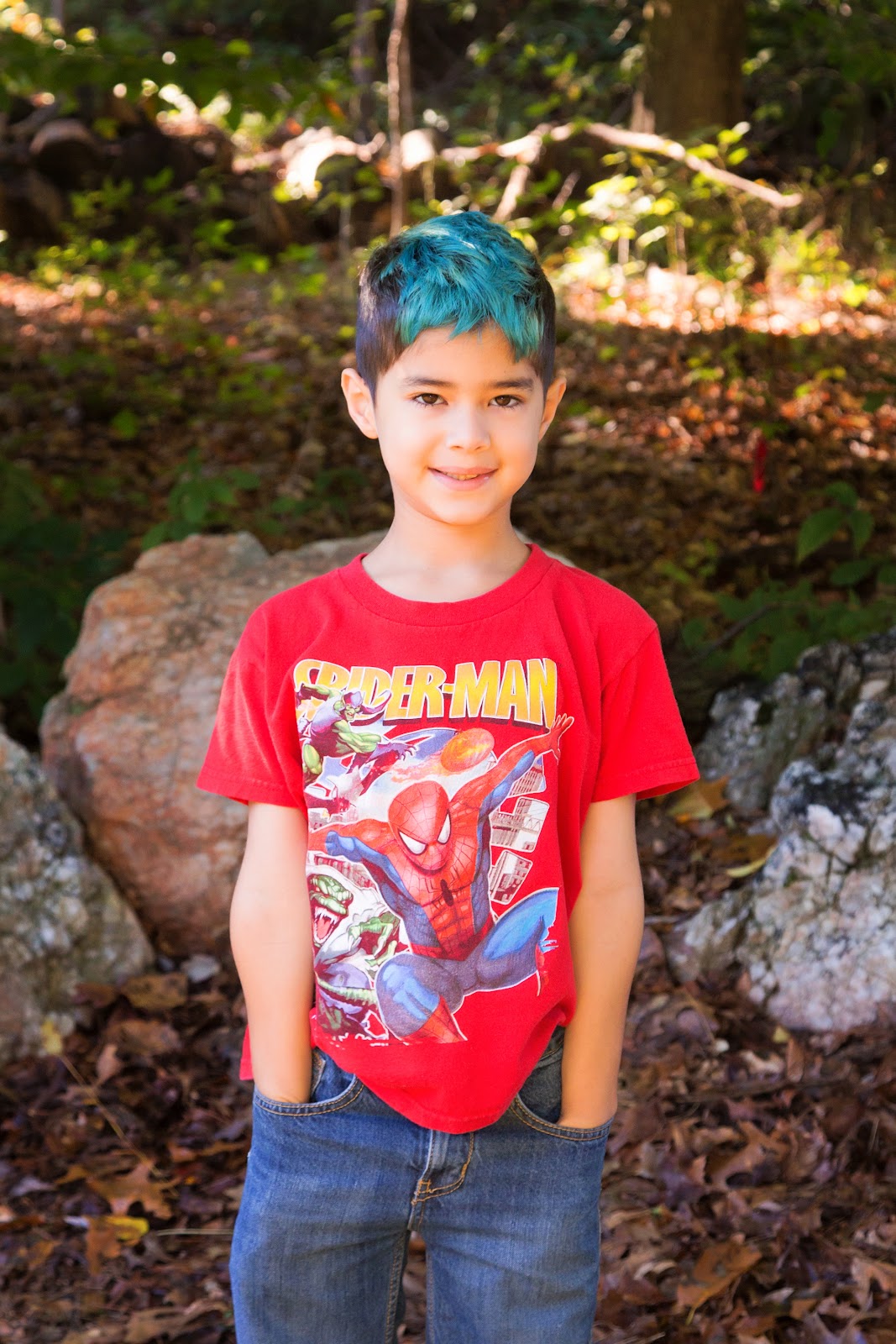 Often I notice that I could live many versions of myself, like Mystique from the X-Men.  Well not quite so perfect and deadly.  But many paths or possibilities.  I could see my life without choosing to have kids, I think Mari and I would be living on the West Coast, and we would have probably spent some time backpacking in Asia.  I can see my life on a homestead, with a sweet pair of goats in our back yard that Nala and her friends take for walks on sunny days.  I could see my life in the city, with a suit and a job, although that reality makes my stomach churn a bit. 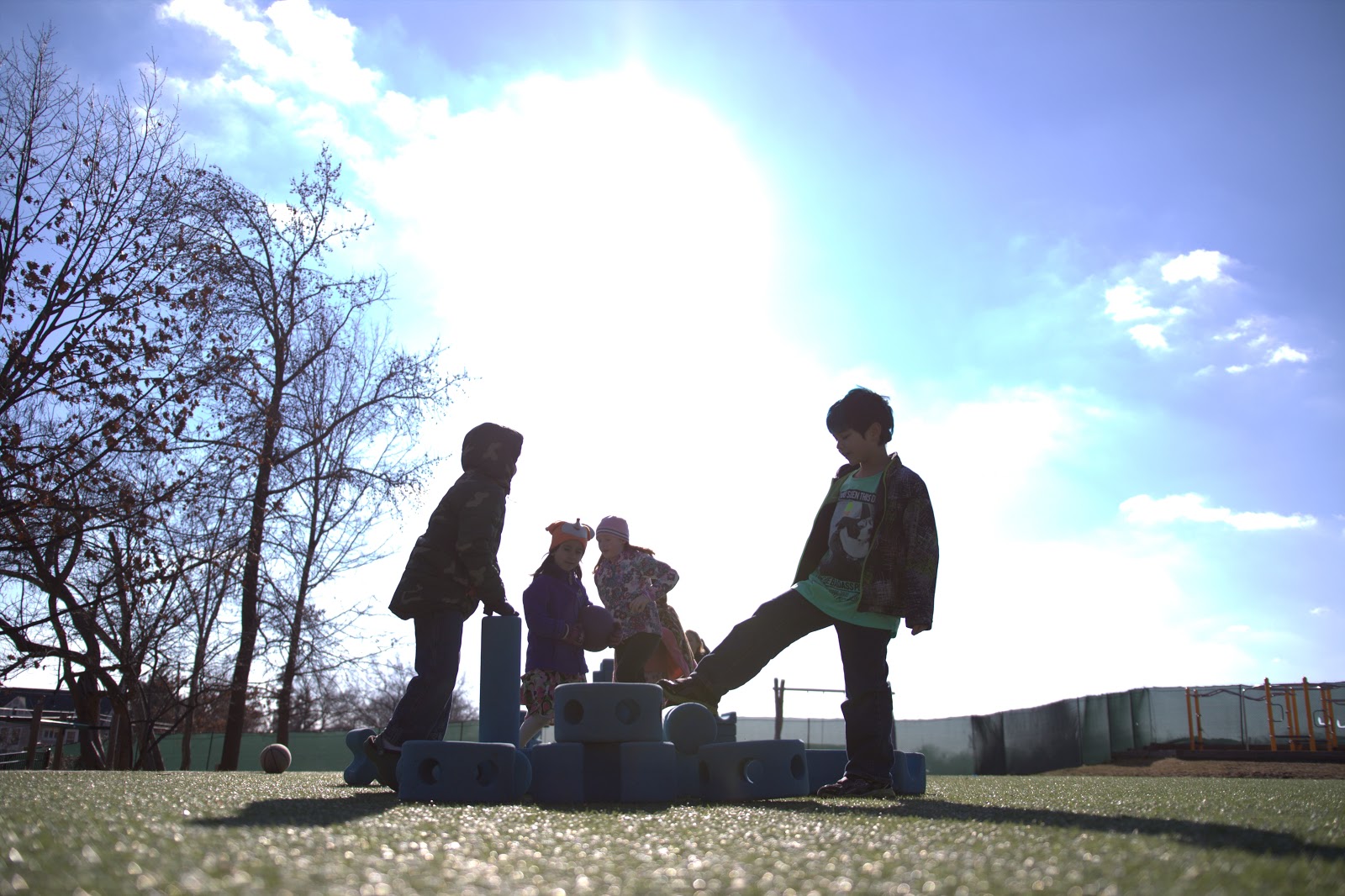 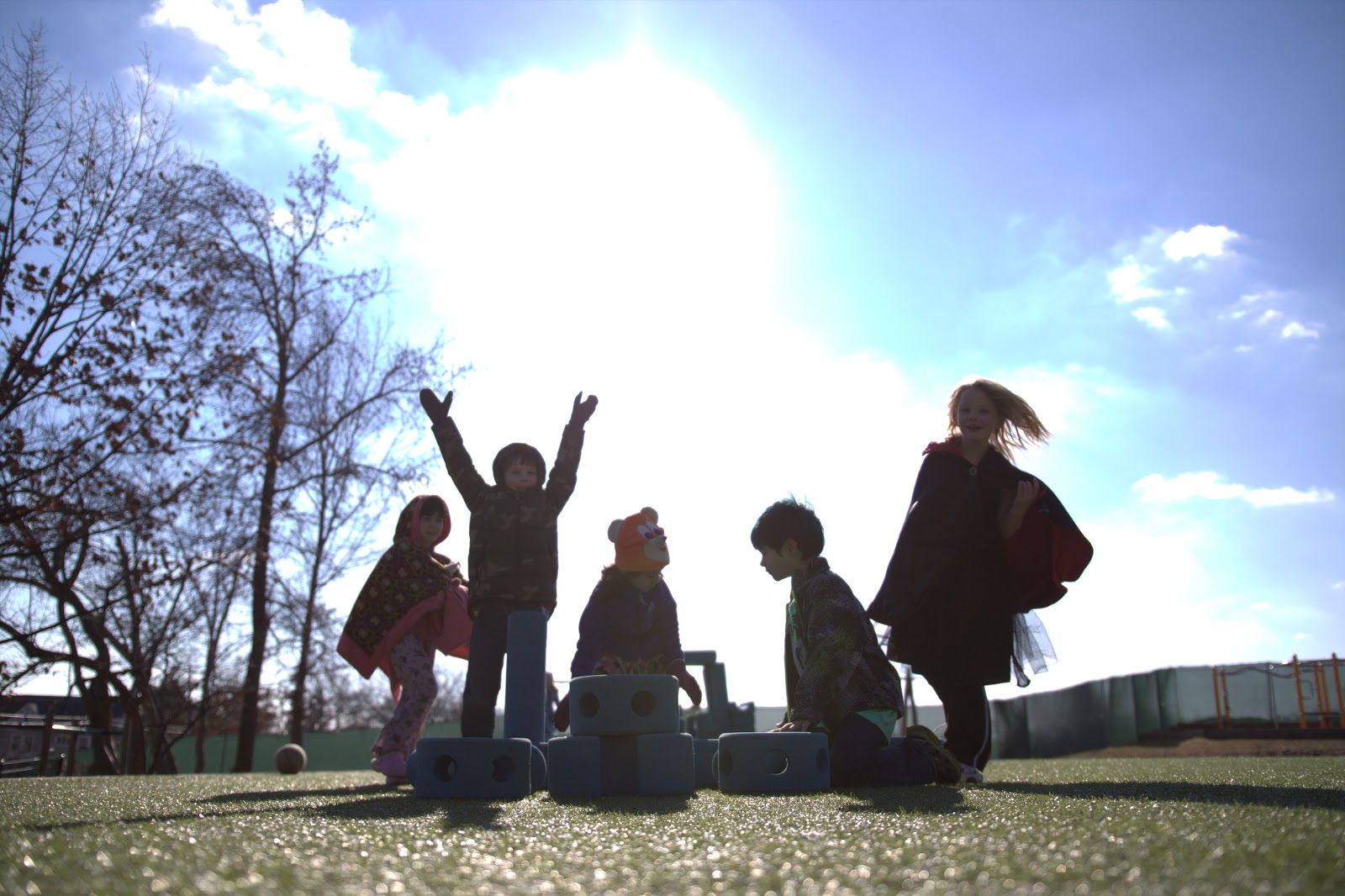 I had gotten used to our reality as homeschoolers.  I was especially really liking the other homeschooling families we were hanging out with.  I saw our future, days spent in our own rhythm, immersed in creativity and learning, free from societal expectations.  But our present reality waded along afflicted with clashes.

I thought in the homeschooling environment I would be better able to accommodate his leaning disabilities by tailoring our schooling around his specific needs.  I couldn't find a curriculum that fit well, and so I was molding the days around his interests.  But I just wasn't that great at it. 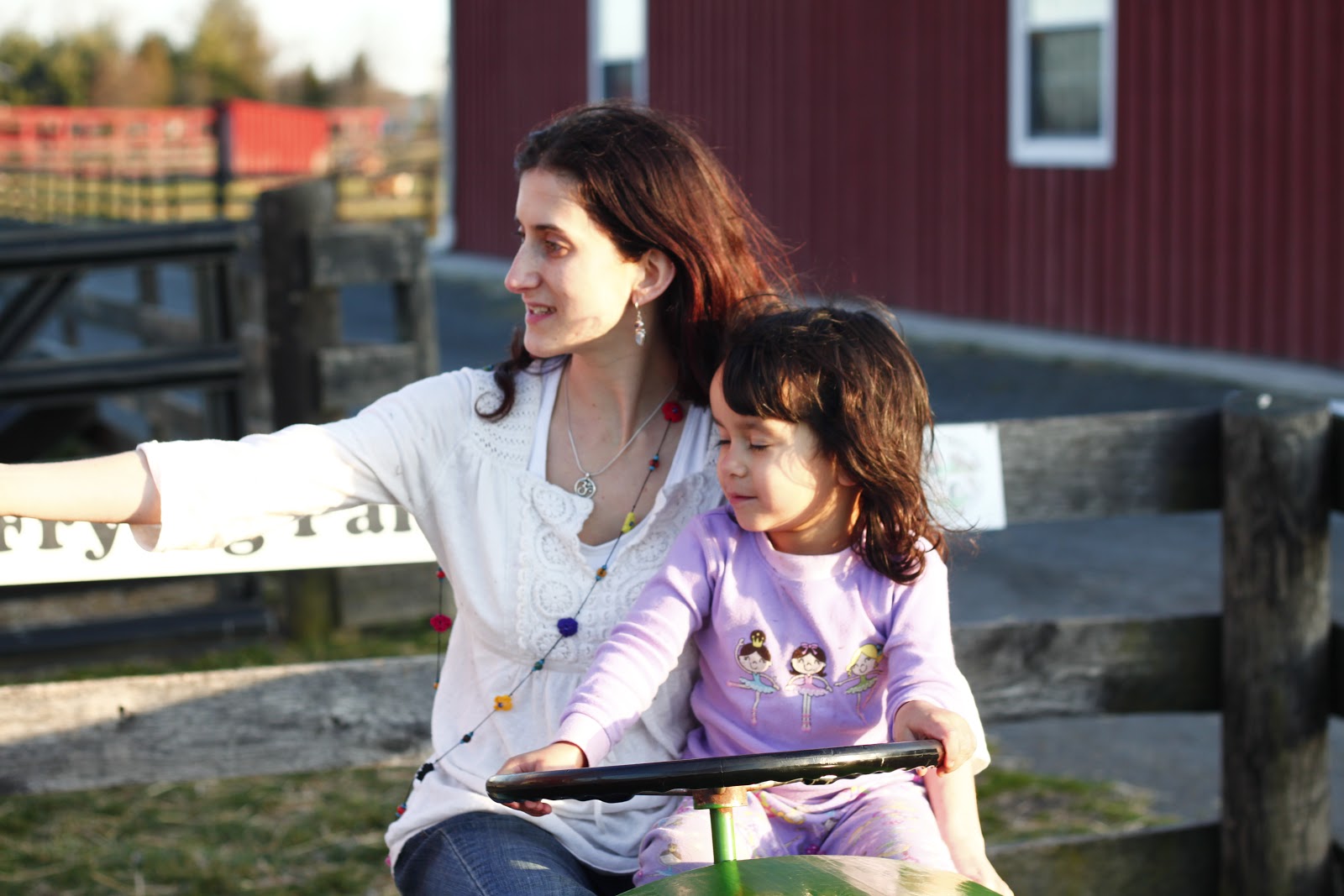 After a year into it I still couldn't teach myself to get better.  Our problems became even more pronounced after Nala started school and after Tori's birth.  Lack of sleep made my fuse shorter.  Difficultly getting out of the house with an infant meant less social opportunities.  We would get to an event once or twice a week and Kaio would spend the whole week recycling over whether the kids liked him or not and convincing himself that no one liked him.  The next event would be another drama completely manufactured in his anxious mind.  I was not serving him well, and he was becoming afraid of people, more timid than I'd ever seen him.

Then our days completely revolved around him obsessing with playing video games and doing his work and chores so I would let him play the video games.  I searched all over for things that were fun that were not video games; hiking, swimming, board games, audio books, trips to museums, science experiments, classes on robotics, parkour, skateboarding, and native crafts.  I tried using the video games as springboards for other activities; reading graphic novels about Plants vs. Zombies, Lego and Starwars inspired writing prompts, researching history of Assassin's Creed and Just Cause era, and much more.  But he never liked anything and boy was that discouraging.  So I decided to implement more structure and define the required work for each day in reading, writing, and math.  I only wanted us to do a couple pages of work a day but he would negotiate with me for about an hour -every day- to do less.  And who can blame him?  We'd spend the whole morning like that.  During fights he would say awful and hurtful things about himself and about me.  Mari thought that he was bored, and I agree.

I overheard my mom praying for help. 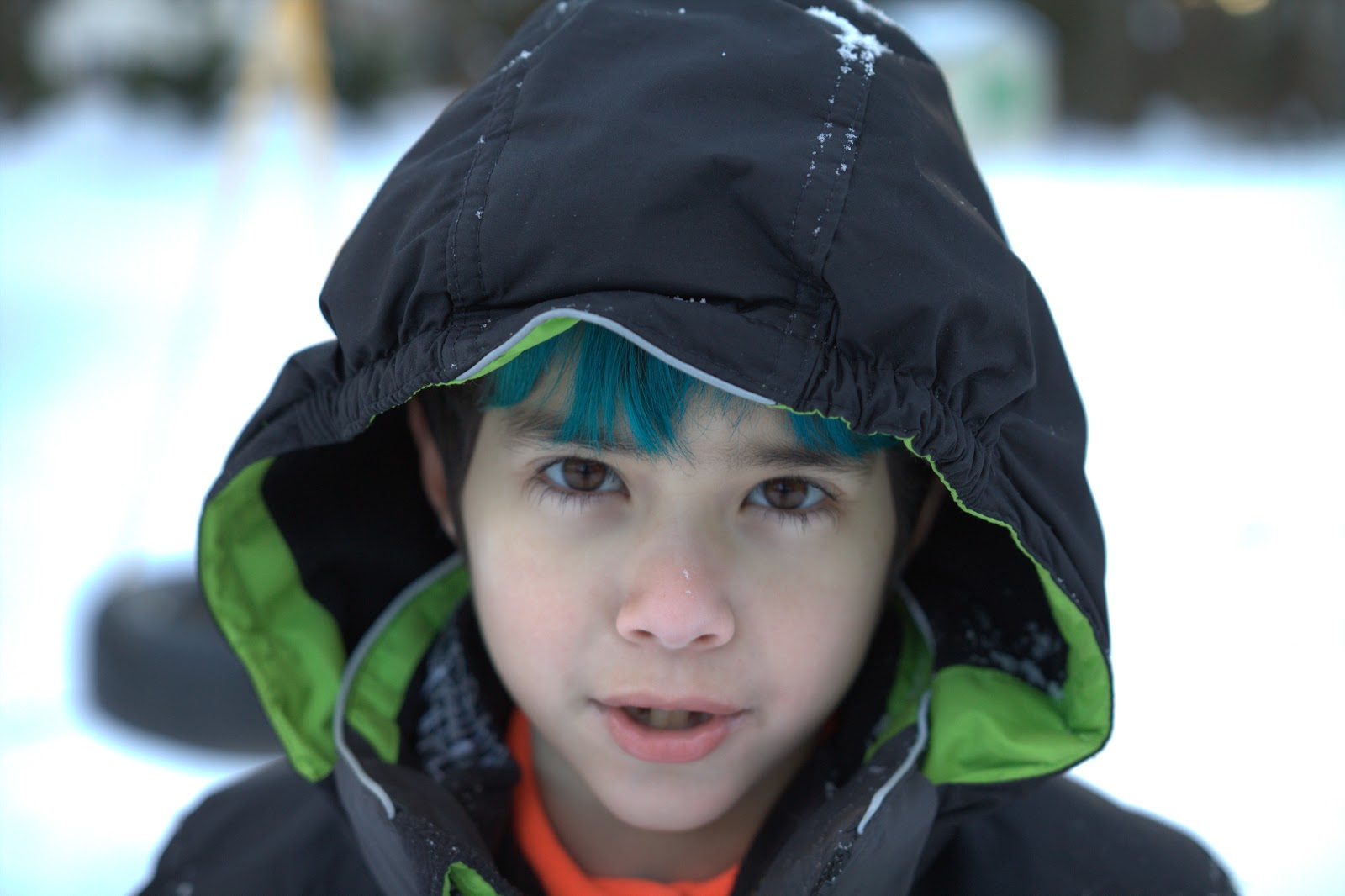 Then a family moved in on our street.  A girl Kaio's age, who gets along with him and dances to the beat of the same drum.  But she goes to school and likes her teacher.  I started thinking, 'wow, well if she seems to be doing so well, maybe Kaio would too."

I remembered what the new principal said to me at Nala's K orientation, "How's Kaio?  How's homeschooling?  If you change your mind, we'd love to have him back." 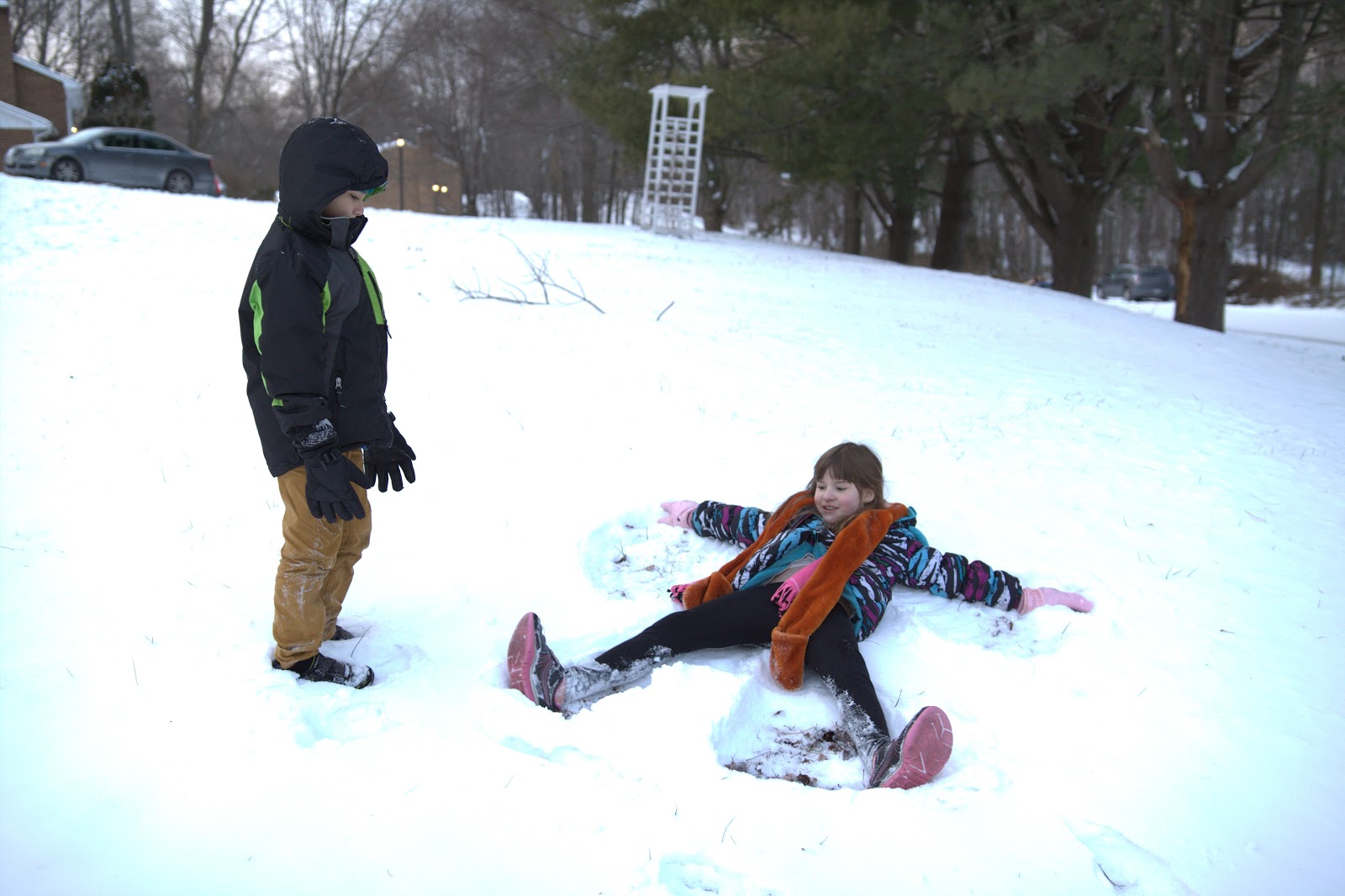 Kaio's began inquiring with me about homechoolers who had returned to public school.  I contacted the new principal to ask if we could come visit and when we arrived for the meeting we saw that he had just shaved his head to celebrate the school obtaining a fundraising goal.  What a silly guy.

At first Kaio was reluctant to return to school, but then we went to see the class.  He didn't want to leave.  He was so happy to be around more kids.  We stayed to have lunch there with Nala.

He starts begging me to let him go back to school.  Zoom, within a week I have all the paperwork done and BAM suddenly he is back in school all day long.

Luckily the principal really set a tone of respect with the teachers and staff, so we were treated well despite the hair and our abnormal academic practices.  He also said not to worry about doing homework if that became a fight. Can you tell I dig the new principal? 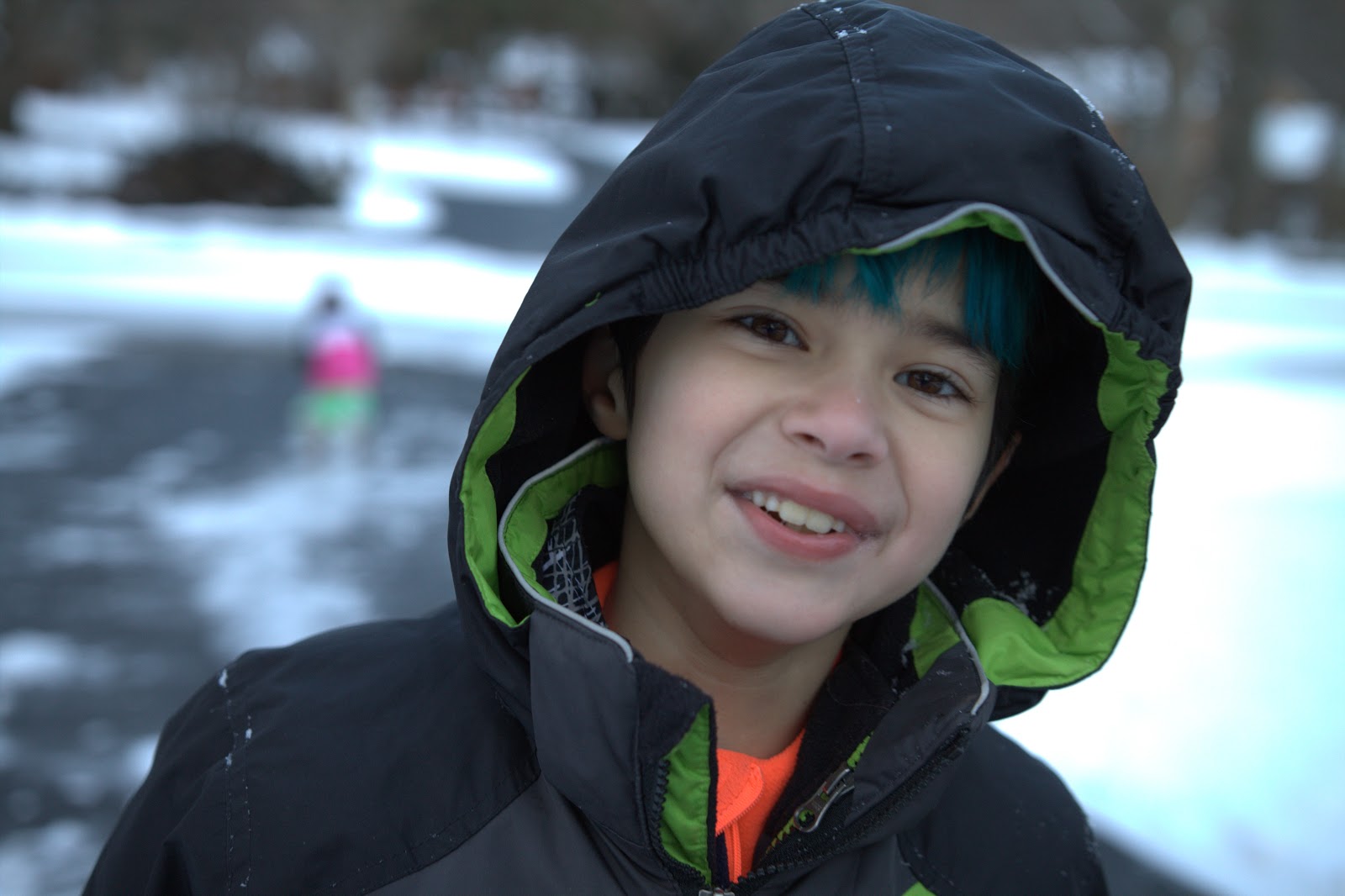 Joining mid year, and with blue hair, Kaio has caught so much attention from the other students.  The teachers were able to fit a speaking part in for him in the winter show, a funny line that made everyone in the audience laugh.  He said, "Hit it Ladies!" introducing the girl snowflakes to come on stage and dance.  Girls have crushes on him.  He's completely oblivious to this of course.

I know the transition to school workload and academics must be hard for him.  But at least he likes to go, and honestly he seems happier at home.  He has stopped obsessing over video games.  A whole 4 days passed where he didn't play any video games.  I couldn't believe it.  It seriously blew my mind since our life had revolved around those video games for over a year. 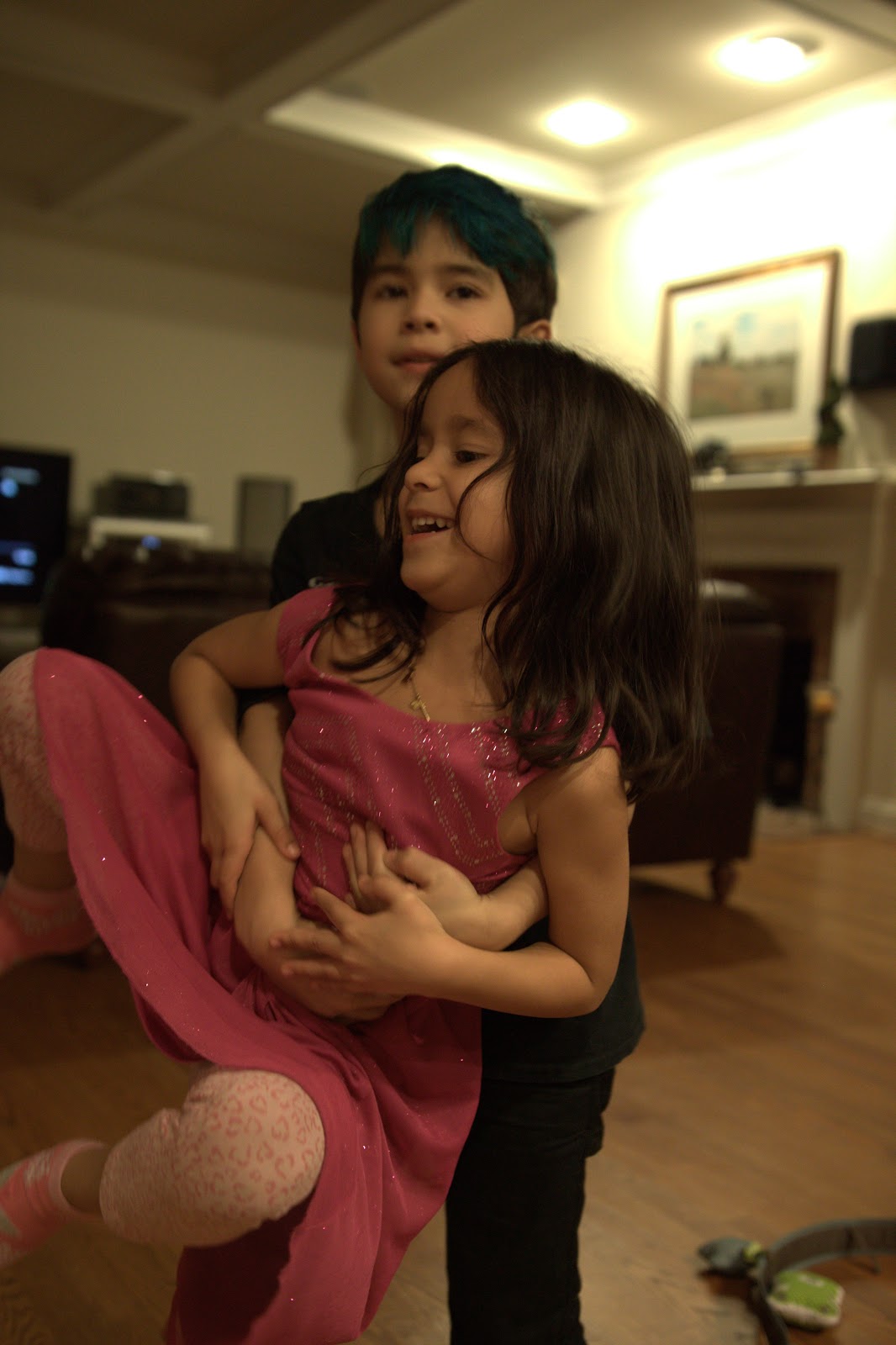 Nala likes to go to school too.  They sit on the bus together sometimes, which I think is the cutest thing imaginable.  The neighborhood kids have quite a little tribe and play together after school almost every day.  All different ages, but they get along and look out for each other.  The sixth graders that play are all such cool kids.  I wish I had a childhood like that. 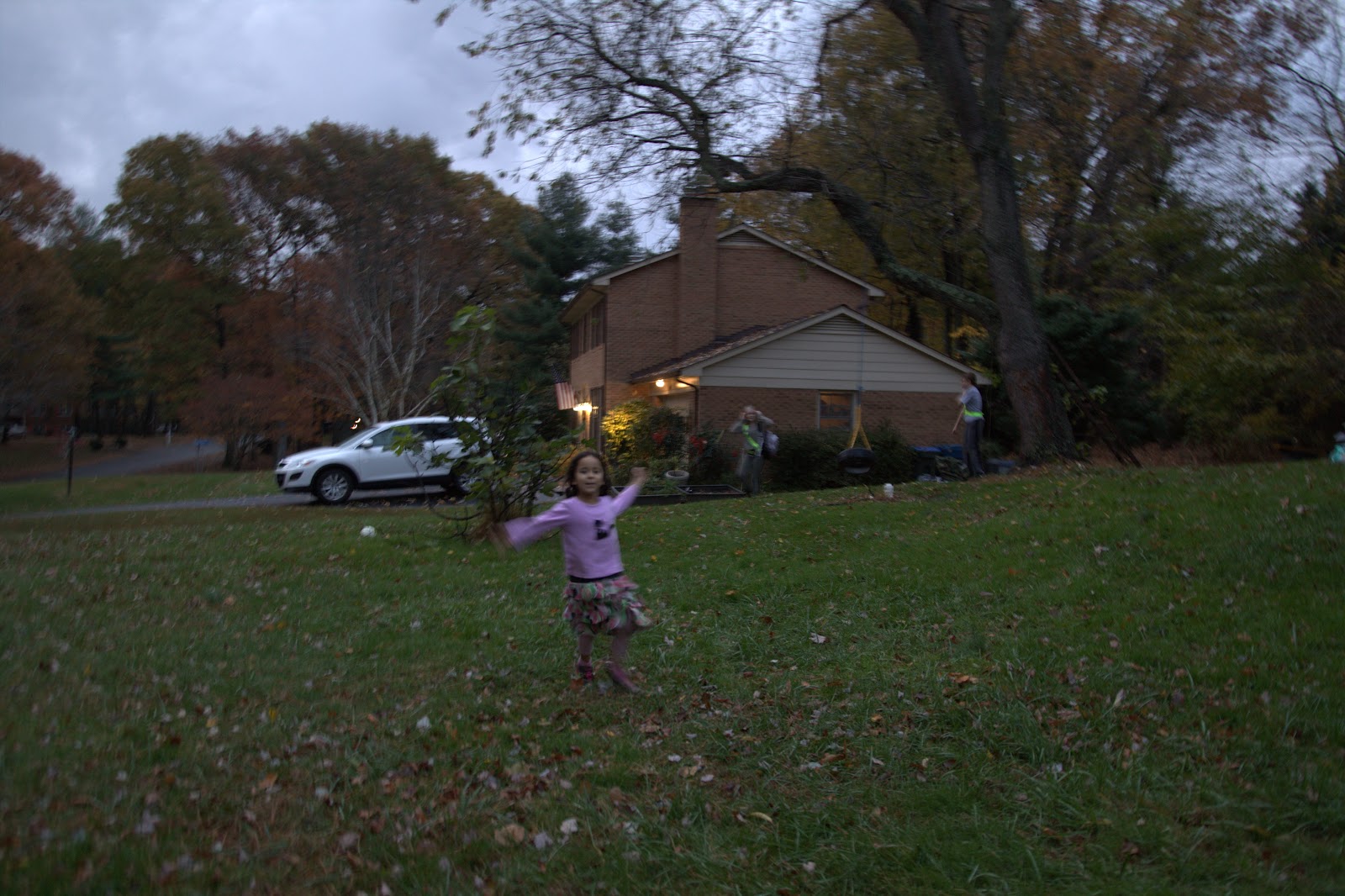 Today an argument broke out between Kaio and one of the younger girl neighbors.  She ran off crying.  Later on he decided that he wanted to apologize.  One of the other girls assisted Kaio with the process, occasionally she whispered in his ear what to say and mediated their resolution.   Never once did he look at me for help.  For so long I felt like the only translator between him and the rest of the world, it was beautiful to see that I didn't need to be.

When we put him back to school I fought feelings of failure.  I wasn't good enough at catching his interests and igniting a passion for life away from the screen.  Nor was I good enough at recognizing and capitalizing on moments when those passions were prime to be fanned.  Or maybe I wasn't good enough at backing off and letting the learning happen organically.  I worried that I represented a bruise in the awesome fruits of the homeschooling community.

But I had to talk myself out of all those poisonous thoughts.  First of all, nobody said anything to insinuate those thoughts.  Public school is only one measure of success in a landscape lush with diverse stories.  And I don't think we did anything wrong.  We sculpt our life based on the best options at the moment.  If the kids start to feel like school is not serving them anymore, then we'll consider private or homeschool again.  Although my kids have chosen the school route for their lives right now and it seems like the right path, I would not be surprised if we came back to homeschool when they can read and be more self guided.

I still feel like a homeschooler at heart because I believe in self-led learning and connect with the non-conformity.  Is it weird that I really want to go to the VA Homeschooling Conference this year? 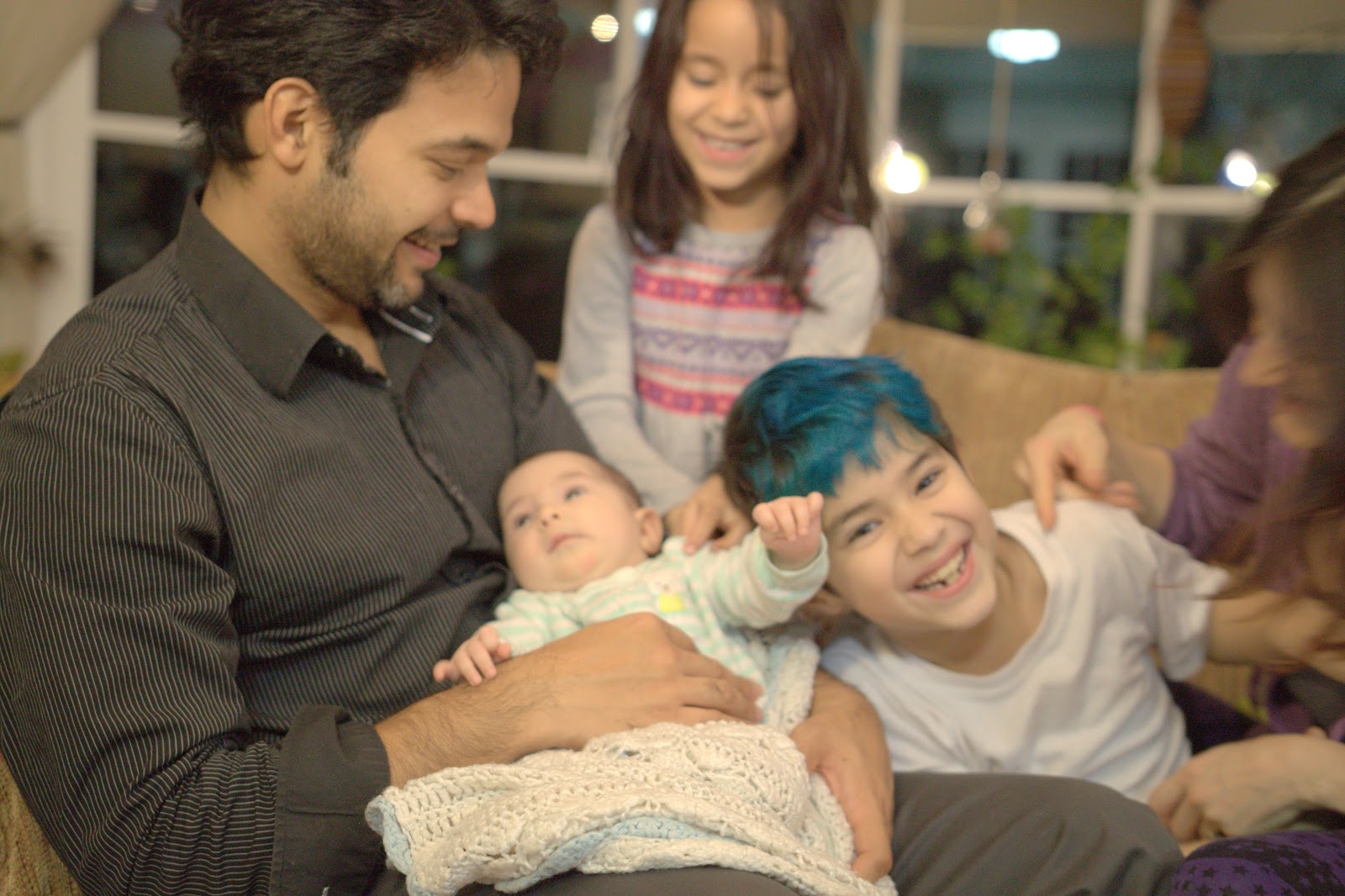