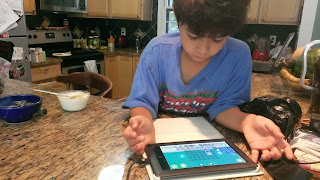 I caught a glimpse of the big yellow bus shooting past our bay window, the rumble of diesel vibrating the glass.  I had to stop and feel the moment, the second day of the new school year started and my 1st grader is not on that bus.  This time last year I held back tears when that bus shot by.  But this year I felt relief.  My boy still slept as the bus left, and when he woke up he became so engrossed in a video game that he didn't even want to break from it to eat breakfast.  I'm proud of this, happy to see that he has become so interested in something that he dedicates himself to it.  That's a skill he'll need in the future.

I had my moments of doubt in the ending weeks of August, where I worried that homeschooling was too much work for me and too much pressure on me to give the right answers all the time.  But I turned in the paperwork to the county anyway because I know that homeschooling is the best solution for Kaio's personality.  He doesn't need to be forced to sit at a table doing cute construction paper projects and worksheets.  He needs freedom to play. If we lived in Finland, then he wouldn't even be in school yet because they start compulsory education at seven years old. 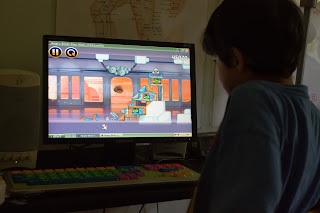 And here Kaio is spending a big chunk of the day mastering Finland's greatest export: Angry Birds and Bad Piggies.

Yesterday he baked a cake, that we ate for dinner and breakfast.

oh, I could share the list of what he wants to learn about this year (the basis of which I used as the list of subjects I'm required to submit to the county).  But I think it's still too influenced by what he thinks you're supposed to learn in school.  We're still deschooling.


Nala and I painted. 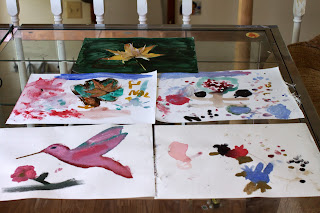 Because I believe that if you can create your own space surrounded by art, then you will never be a slave to someone else's definition of success or value.  You'll always be immersed in beauty.