Three Weeks into the School Year 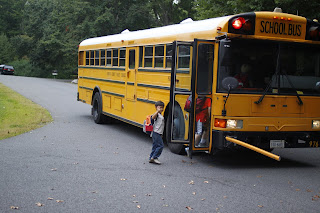 Three weeks into the new school year and this Monday morning marked the first day Kaio left the house without saying, "I don't want to go to Kindergarten."  He dressed himself before eating breakfast, which surprised me.  He didn't complain as I packed his lunch or suggested he get some socks.  We calmly walked out the front door and played catch with a football at the bus stop.  Then the bus pulled up and I halted him for a kiss before he marched on.

Well I guess that's that.  For now Kindergarten seems to be working for us.  I can say that I'm much more collected and sane having a quieter house, and I already see expressive language improvements with Kaio's English.  He talks up a storm at home, explaining things they do in school.  His pretend play scenarios contain more elaborate story lines.  Seeing how his English is catching up with the other kids, I'm thinking about switching back to Portuguese at home. 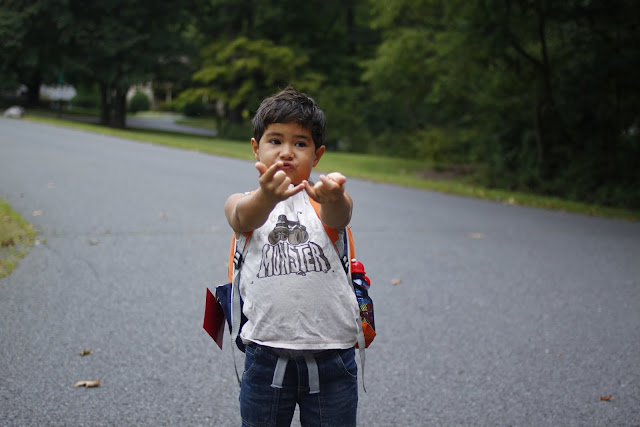 Throwing a spider web on the First Day of School! 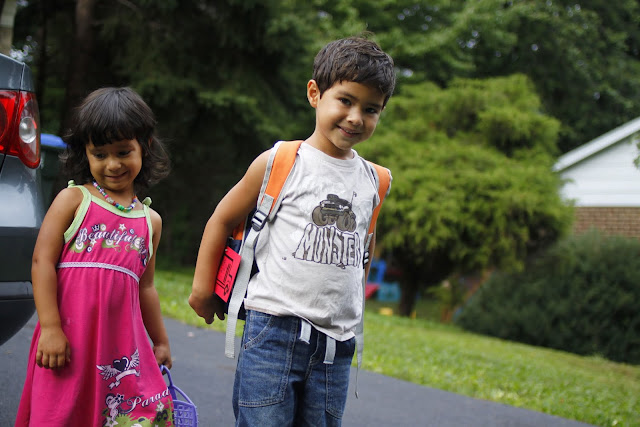 Can you tell the current obsession is monster trucks? 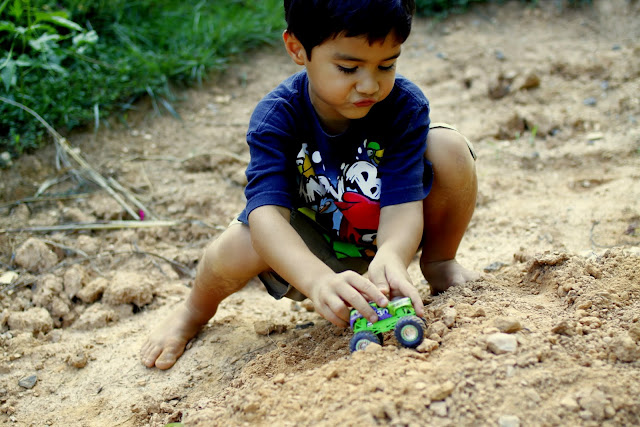 Luckily we have a big dug out hole in the front of our yard, where we were going to put a fish pond.  It makes a perfect rally track. 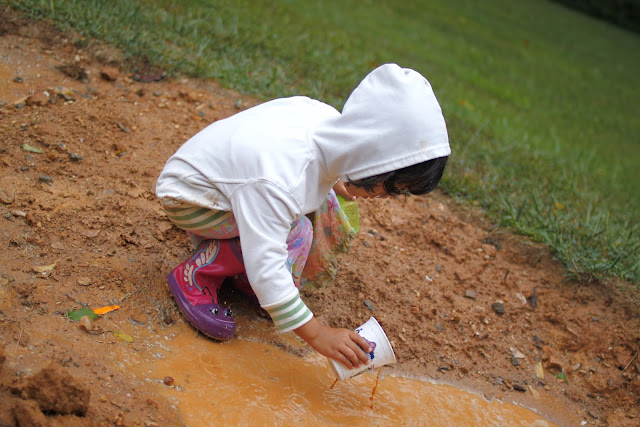 We didn't officially finish.  But, when it rains we get a little lake.  Almost as good as a fish pond. 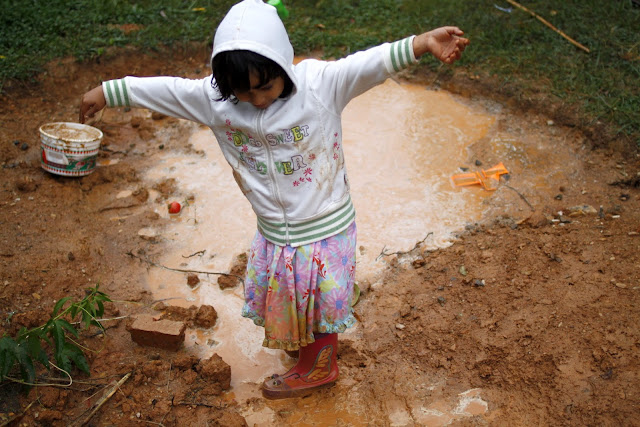 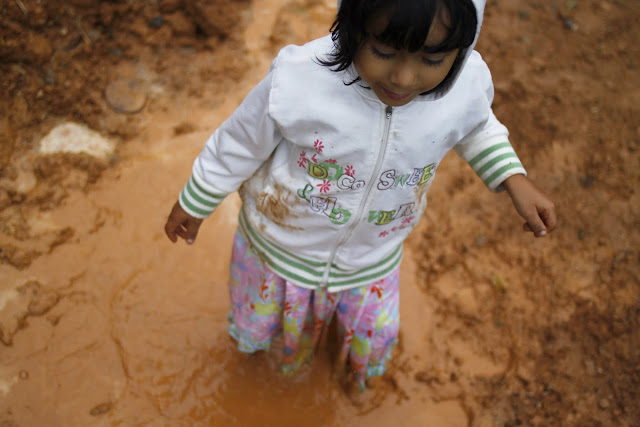 Speaking of water, we checked out the Yards Park in DC a couple weekends ago.  There's a fun little splash zone. 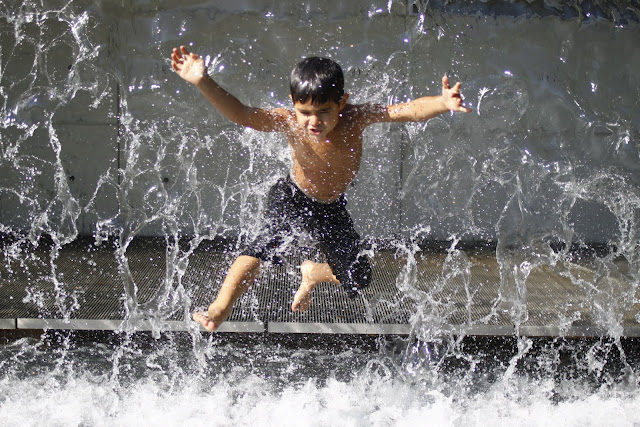 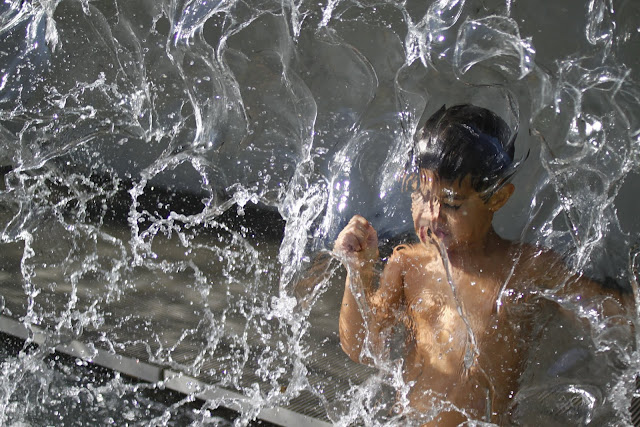 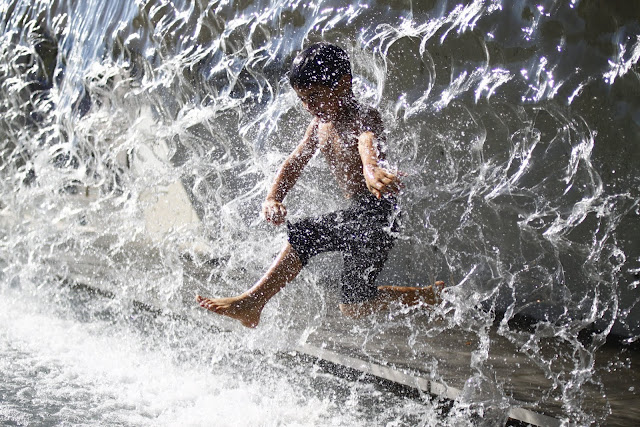 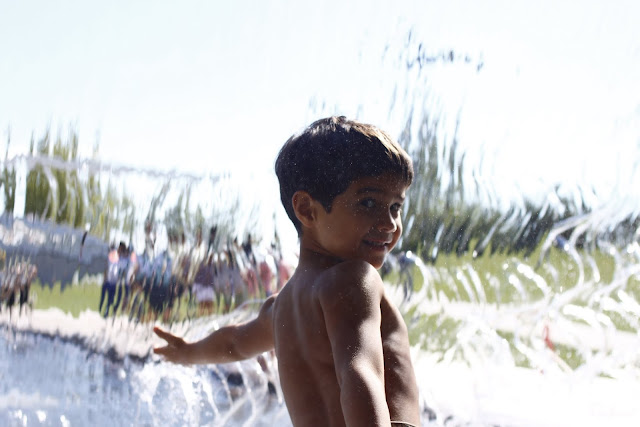 Since starting K, Kaio's been extra lovey and extra angry.  I'm trying to keep calm and give him loads of hugs, encouragement, and patience.  The anger outbreaks have subdued quite a bit in the last week.  I know he's undergoing lots of new emotions with the kids and teachers. 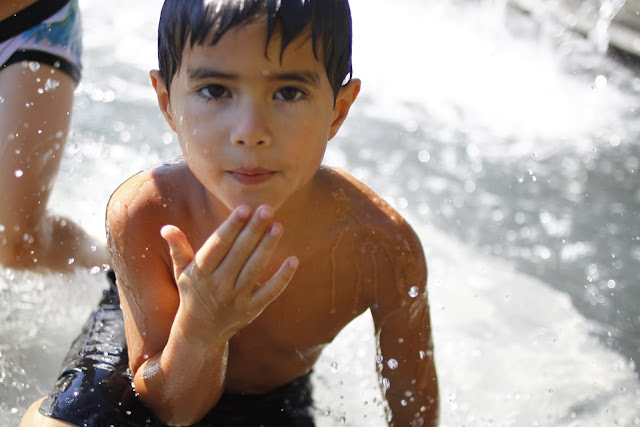 He's so innovative.  He saw me wrapping some food in aluminum paper and spontaneously came up with the idea to use the foil as a mold for cars.  Now his monster trucks can get some Real Crushing Action! 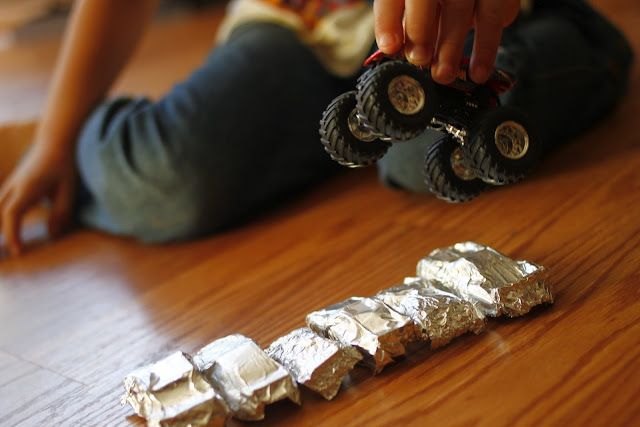 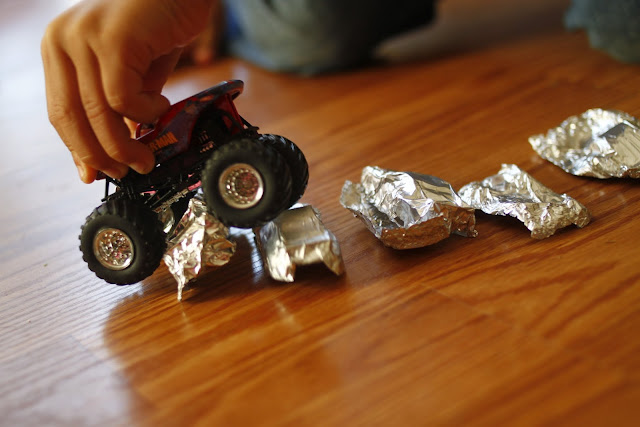 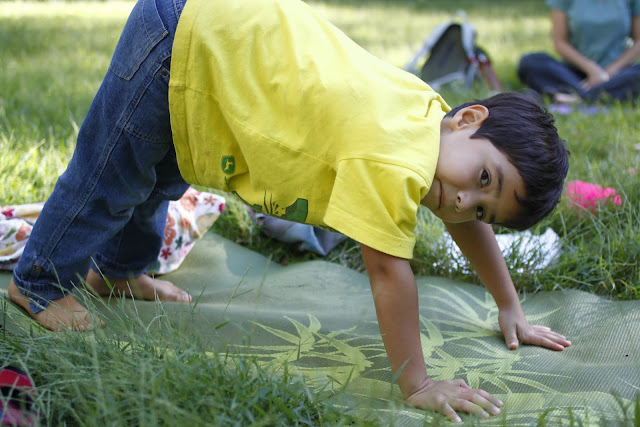 Kaio surprised me by busting into a sun salutation set during a kid friendly yoga class.  Mom friends and I have been meeting weekly to practice yoga.  I lead an adult yoga class while the kids play in the park around us, and sometimes they decide to participate.  We don't push them to do anything really, the only rule is they need to stay in our view.  I only brought Kaio once because I knew he'd try to distract me from queuing the class, which he did.  But, for a minute he joined in and followed along perfectly.  I had no idea he could follow directions so well! 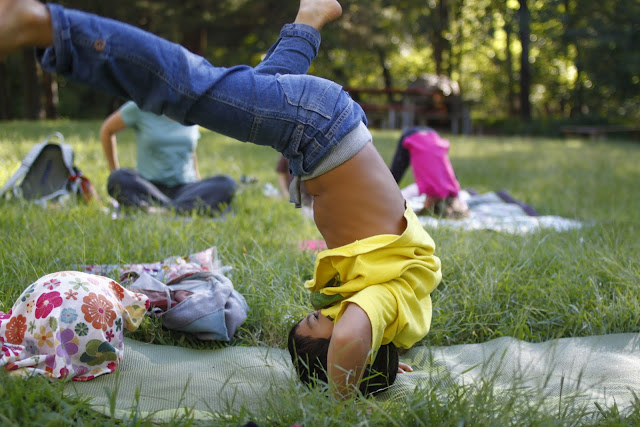 Then he had to show off and attempted a headstand. 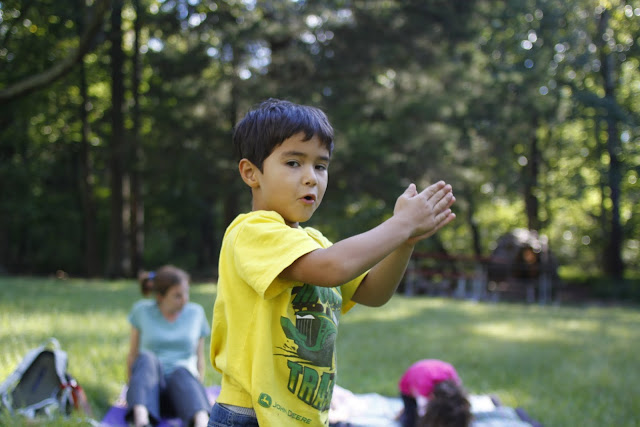 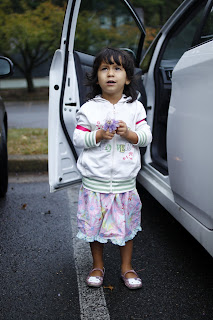 Meanwhile, Nala started a new preschool too.  She only attends two mornings a week.

A rainy first day, she seemed ok.  I love the school, which is a Coop, so I work in the classroom one week a month.  On the first day she walked right in without looking back.  Happy to play with clay.

We've been trying to keep busy with Kaio gone.  A major source of energy and commotion has vacated the house.  We've been mostly doing boring stuff like cleaning, cooking, planting, and drawing.  But we're a pair and very good together.  She even brought me breakfast in bed on Sunday.  She made it herself from things she could manage: a cold hotdog with a tea cup of mustard to dip, and a couple pieces of cereal on a plate next to a drop of cottage cheese.  It made little sense, but was so sweet! 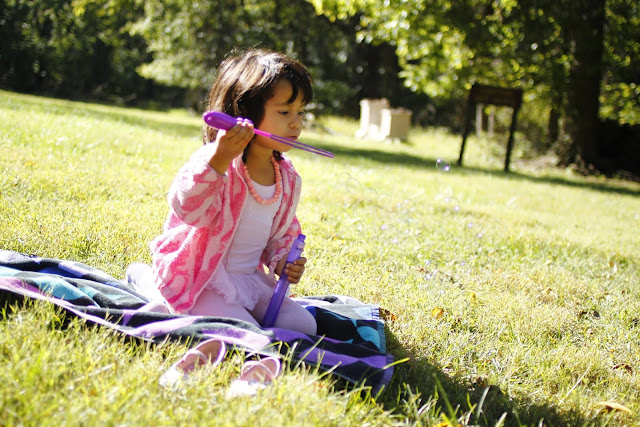 It's totally amazing to me how peaceful Nala can be. 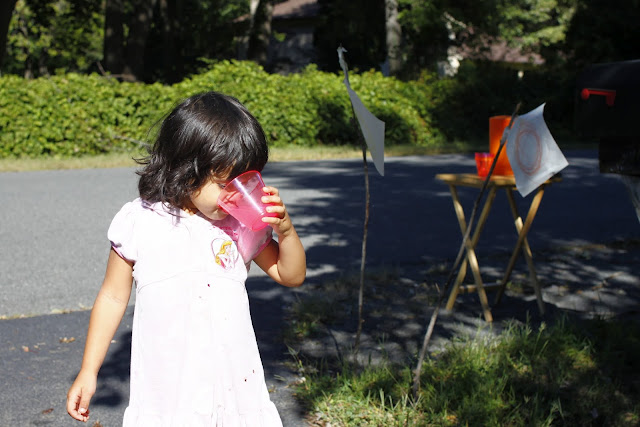 Then there was this one day when she was really motivated to make a lemonade stand.  She did everything herself: squeezed the lemons, mixed the ice and sugar.  She grabbed paper and made two signs.  One colored red (telling cars to stop), and the other colored yellow (telling cars to drink lemonade).  Then she found long sticks to tape them to and hold them.  As much as I wanted to sit inside and read a book, I knew I needed to get wrapped up in the tornado and try to support her dream. 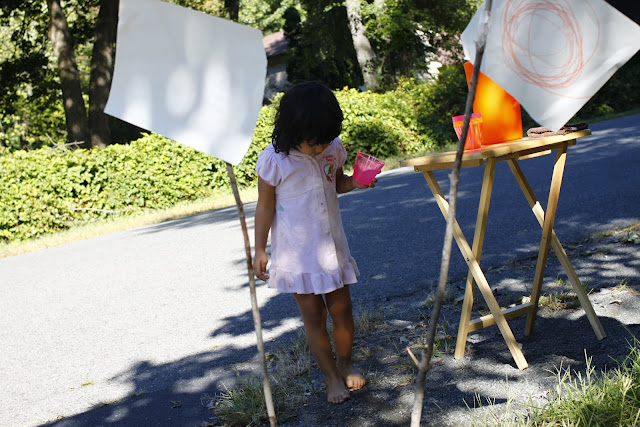 So I let her stand on the side of the road in a dirty towel dress selling lemonade.  I'm glad some of our neighbors came by and that seemed to make up for all the confused cars that passed without stopping.  They liked the lemonade.  Nala must be an entrepreneur like my mom. 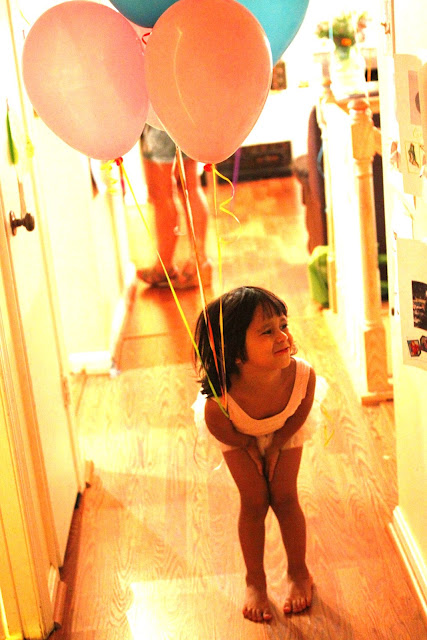