Bad Date at the Movies 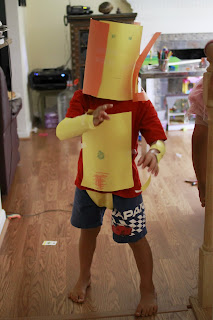 My boy and I went out on our fist date to the movies to see Iron Man 3.  I'm crazy for Marvel Universe films, they're so good!  Upon hearing that Iron Man 3 came out Kaio really wanted to go see it.  We've watched the first two are home already and the Avengers, but there are many parts that are too scary for him and he goes into another room or hides under a blanket.  Well it didn't go well, and I knew that it wasn't going to go well, but I wanted to see the movie so bad that I agreed to try.  He doesn't even sit through a full length movie at home without getting up and jumping around, so I didn't have much faith that he'd want to sit through Iron Man.  We made it to over an hour before he started begging to leave.  The movie is very violent with lots of indiscriminate killing of bad guys.  There were kids smaller than him in the theater too, some of them were crying, he wasn't the only one.

So we left and I didn't get to see the end, which has been bugging me.  I want to know what happens! I even googled, "Iron Man 3 Full Movie" and found a movie on youtube that when you click on it says, "Stop stealing movies, go to the theater."  Now the internet thinks I'm trying to steal movies.  I want to tell it that I DID pay to go to the movie, I just didn't get to see the end.
at 8:36 AM