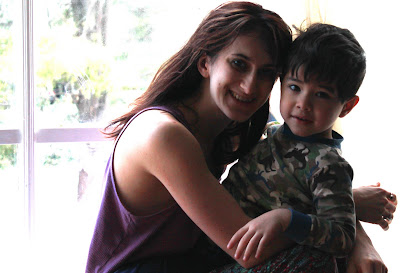 Man, sometimes I think my kid is completely nuts.  He acts totally irrationally and cries like a maniac at the drop of a hat.  Sometimes flailing his legs.  Like, he can't find his train and he starts wailing.  You'd think that he's a one and a half year old.  But no.  he's four.  Is this normal?

Mari says it is, "Conflict seems to be an innate part of parenting.  Because we want to shape them into a form and they have their own concept and needs.  We chip and chip at the rock.  Roughing it up until it becomes the perfect ashlar.  Sometimes it may be good and sometimes it's ugly.  Nene may be good now and then when she gets older maybe things will get ugly."

If this keeps up we may need to stick him in the army or in a preschool boarding school.  I even threatened to put him up for adoption today.  lol. I don't think he heard me.  not very nice I know.

Little guy's got such a sweet heart.  But man he makes me wonder sometimes.

Like today when I walked into the kids' bedroom and he had shaken a bottle of baby powder all over the room. First I'm pissed at him,  "Why, why Kaio?  You know that you're not supposed to make a mess with this."
Then I'm pissed at myself, "I trust you too much don't I?  My expectations are way to high.  How can I expect you to control yourself around the baby powder."

Mari says I need to be tougher/stricter.  I need to bear down on him and pull him by the ear if he doesn't listen.  Mari does pretty well with him.  He's much better at keep his emotions at bay than I am.  Kaio pushes my buttons like a pro pinball wizard.

Lately I have found some things that work though.  Like stating a clear consequence for his actions.  You may start feeling like a big cloud of party-pooping death, "If you touch that beaconing fragile porcelain tea cup and saucer, I will take away your Thomas train."   But it does seem to be much easier on all of us when he knows the punishment for something and can then make an educated decision on whether he wants to continue the undesirable behavior.  You can't always anticipate what trouble they are going to cause.  You have to wait for that mischievous look.

Like tonight, Kaio threw all the books off of the bookshelf (which I let him do cause I thought it was a good physics lesson) and then was trying to climb inside (which I didn't want him to do cause I was worried it would fall on him).  After he knew it was off limits, he still tried to get in.  I went to pick him up and kick him out of the room.  He started to freak out and I realized that I didn't give him a clear consequence when I said not to climb there.  "Ok, Kaio if you get in there again I'm going to make you leave this room, you understand?"
"I understand."
And then he never tried to go in there again.  like magic.

I realized this after Tuesday night, when I took him to my usual monthly HMN meeting.  He ran off four times during the meeting to places beyond my line of sight.  I tried putting him in timeout, but he would cry or scream and we needed to be quiet.  I felt totally frustrated and hopeless.  Especially because all the other kids there were not causing trouble on purpose.  But I'm going to imagine that the other moms didn't bring their kids because they would have been causing trouble too.  I need to get smart enough to recognize when situations are not worth approaching and just not put myself out there if it is going to be too tough to handle.  That's what the smart mama's with outrageous kids do.

On the way home I was thinking about how much more effective it would have been to give him clear consequences for running away instead of waiting until after he did it and then enforcing a punishment.  I could have told him that I would take his Thomas Train away.  Or that we would leave if he did not stay where I could see him.

Hopefully I'll figure it out eventually.  In the mean time I'm glad that I get a few days a week where someone else can take care of him (surprised I just said that cause I'm not super excited about my job and I love being a mom).  But I'm realizing that it's good for us both to get a break from each other else our pitch gets intense.  He seems to really like his classroom and preschool.  When I picked him up today he was saying goodbye to all the kids.  He know them all by name now.  Made me think that he's probably better behaved around the teachers and peers than at home.