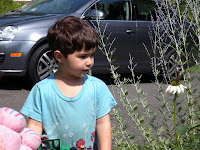 LittleMan loves bugs.  Oh he is enthralled, fascinated, and practically entranced by them.  I have to admit that life seems somewhat simpler and clearer when staring a patch of grass that is really a earthen city filled with creatures going about their workday commute.  Once you start to look at what is moving down there, bugs come out of the grass-work, crawling and scurrying.  These creatures that seem so menacing and gross when you find them in your kitchen, are so very harmless, just going about their business in the earth.
So I am taking just as much interest in the bugs as LM.  We followed an inch worm about yesterday and saved the little guy from certain death.  We are all about saving the bugs.  When we find one in the house, LM says, "Mom, get the paper, get the paper."  If I'm not quick enough he'll do it himself.  He has picked up the technique: hold out the paper, the bug will crawl on the paper and then take him outdoors. 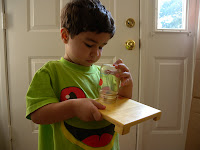 I've also taught him how to deal with the flying bugs.  About a month ago, I caught a flying moth in the kids' room by putting a clear plastic bowl over him.  The kids could watch the moth flying around in the globe.  Then we set the little guy free outside.  GirlFriend displayed elaborate emotion with that experience.  She started babbling in a pouting tone.  It was so cute.  Sounded like she was implying that she didn't want the moth to go and was hurt or even offended that he left.  Sounded like she was talking to him asking him to come back.  The next morning I asked her about the 'butterfly' and she started making the same pouting babbles, recalling the event and signing through the motions of a butterfly flying away with her hands. 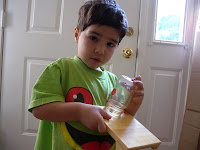 So LM even tries to catch the flying bugs in that manor and set them free.  I'm thinking that he is learning mutual respect for insect-kind and this will add to his good karma and bring him closer to early enlightenment.
That is.  Until I heard about the side track lessons that he's been receiving on the side.  By my own mother!
So she's divorced and LM is the most important man in her life.  He's got a really special place in her heart and she spoils him to no end.  Now she's actually training him to pick up some of those manly duties, like, official bug killer.  She has taught him how to step on bugs in the house, kill them, pick them up with paper, carry them over to the toilet and flush them down!  She even taught him how to use a fly swatter to get the flying ones!
Of course he gets a big kick out of the sport of this, and also digs feeling really useful.  So now he's a living dichotomy: upstairs put the bug outside and make mommy happy, downstairs kill the bug and make grandma happy.  Sometimes when we're outside he follows the ants around the sidewalk and then starts smacking his foot down on them, "I smash you!"  oh it's horrible.  I try to tell him that it hurts them, but good luck getting it out of his system as long as gramma is rewarding him every time he smashes one for her.
at 11:29 PM