Last Tuesday you could scroll through a facebook feed peppered with cute pictures of kids with backpacks on.  Some holding signs proudly displaying their grade and what they want to be when they grow up.  I have no such cute picture.

As much as we planned, we still somehow almost missed the school bus.  I opened the front door to see it on the corner and we raced across the wet freshly mowed grass, grass clippings clinging to our shins and dirtying our shiny shoes.  I should clarify - I waddled and Nala raced.

Before getting on, Nala said to me again, "I'm a little bit nervous."

"I can give you a ride if you want." I replied.

But no, she wanted to get on that bus.  Just like she wants to go to public school despite me offering to homeschool her.

I got this picture. 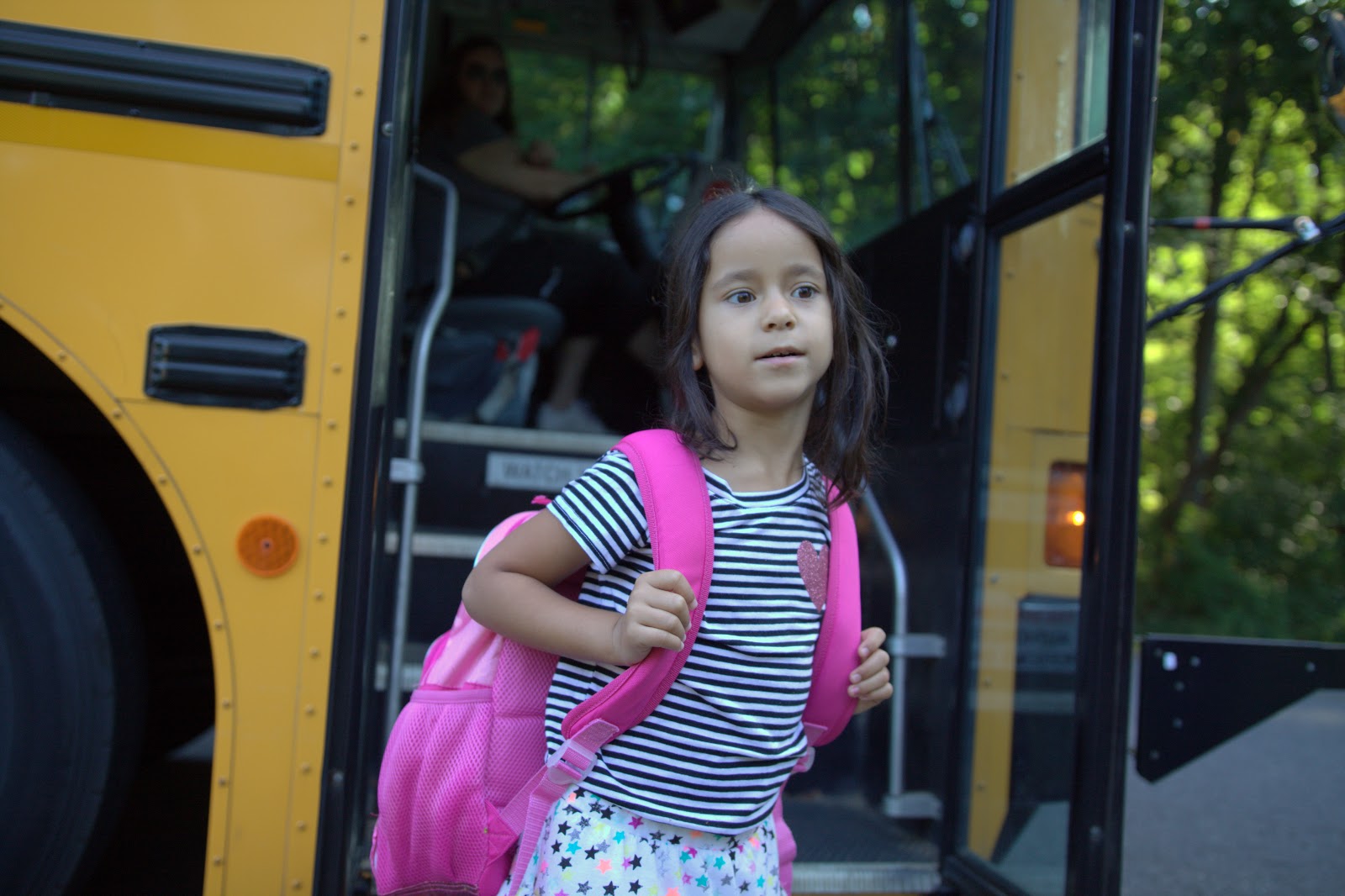 Kaio had accompanied us to the bus.  Maybe he wanted to be a part of the excitement.  Or maybe a little part of him hoped that he'd be stepping on that bus too.

We walked back to the house together, in the front door to the calm stillness of a sunlit living room.  You could hear soft acoustic guitar music streaming through Spotifly and playing on our little bluetooth Bose speaker.  I was trying to keep the space as simple as possible, neat and sensory soothing.  I'd gotten a little purple cardboard shelf to file the workbooks by subject, and a coffee table made of cherry wood to work at.

I would have taken one of those cute homeschooling pictures of him with the plaque saying what he wants to learn.  But I knew he wouldn't be down for it.  And when I asked him what he wants to be and study, he said this: 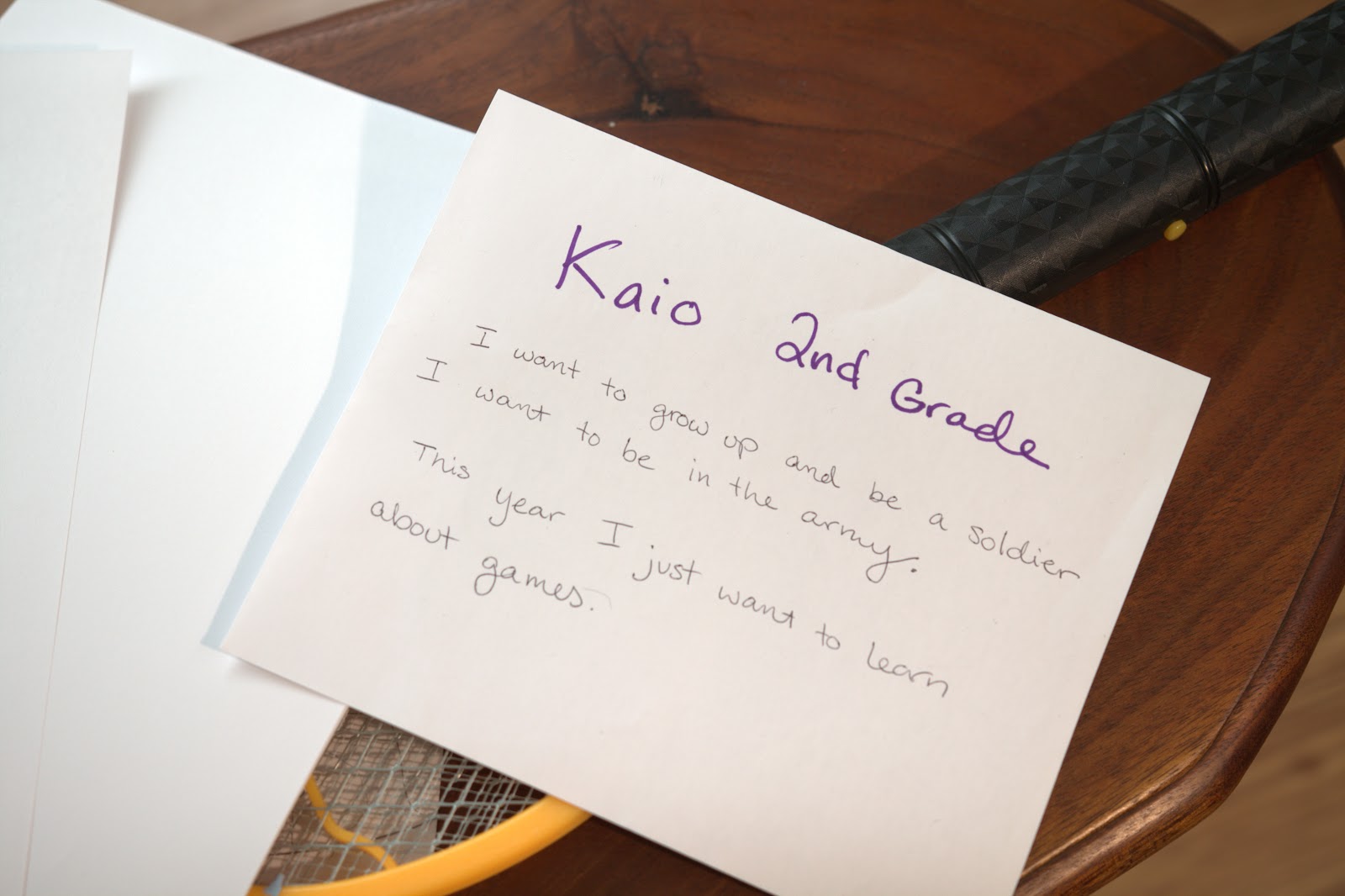 It took us a good two hours to get through a page of math review.  I knew it would be hard to get back in the swing of things.  Each day seems a little bit better, but I spend most of the morning regretting taking him out of school, since that is our formal study time.  And then most of the afternoon feeling that we made the right decision, since that is our activity time.  Last week we went to the pool twice, met up with other homeschoolers, watched a documentary about the US invasion of Panama, built a tank out of cardboard, and read stories on real zombies in Haiti and the legend of the Flying Dutchman.

He's super good about doing his chores now, and I've started to add a couple more to the list.  Basically he just wants to get his responsibilities out of the way so that he can relax on the sofa playing video games.  I really respect that, because if that's what his adult life looks like, that's admirable in my book.  Go to work, contribute to society, make your money, keep the house clean, and play with your video games or toys or whatever.  That's what most of the successful guys I know do, and they are pretty happy and cool!

Nala seems to like school.  Her teacher lives on our street, and she really lucked out this year by landing in the same class as her bff,  She's a lucky girl.

However, she did complain that people are telling her what to do all the time and she doesn't get to do whatever she wants.  Like in art class she wanted to draw a dog, but they were only allowed to draw a straight line, curvy line, circle, triangle, etc.  I had to laugh.  That's school girlfriend!
at 10:10 PM