Language of the Heart Story of How I Met My Man

I scared the crap outta my dad when I emailed requesting him to send my birth certificate down to Brazil so I could get married.  My dad was always pretty supportive of my path in life, no matter how strange it seemed.  But with that email he actually called down to Brazil to talk to me (he'd never tried to call me before, not on my birthday, not on Christmas).  "You've only known him for four months....  If it doesn't work out you'll have to get divorced and who knows what the laws are down there..."

It seems a little crazy in retrospect; decide to get married after only spending solid 2 weeks with someone, but it ended up being the best decision of my life.  Given the language barrier it could have been a gamble, but I felt safe enough with my heart in his hands to take the chance.  And I kept reminding myself that people who date for years still get divorced or grow apart.

So yeah, another gushy post.  But that's just how I've been feeling lately.

Mari and I met in 2002 while I was on a cultural interchange studying Amazonian culture and ecology.  Ironically we met a few days before I was scheduled to leave, although we found at least 6 different times  when we almost met before then.  This angered me at first.  Just thinking about how much more wonderful my time abroad would have been if I met him earlier and how great it would have been to know him for longer.  Five years later I even got a little pissed with him for not going to the concert I went to on our first night there with our mutual friend!  But he had a girlfriend during those times, and thinks fate kept us apart until he was emotionally available.

We barely kept in touch after I returned to the states.  Just emails here and there, occasional letters, a phone call on my birthday.  Then my mom suggested we take a summer trip back to Brazil together.  So we returned to Brazil for a week.  Mari and I reinforced our bond and mom got to meet him.

Another year passed with scarce contact.  We just weren't the long distance relationship type.  But I always kept him in mind, like Sandy's warming summer fling in Grease.  And after graduation, with our rare contact, it seemed like things might be left at that.  A warm memory of touching hearts and a connection that transcended language and culture.

The next chapter started in Portland, OR, at a coffee shop across from the public library.  Ten-o-clock in the morning with a cup of vegetarian minestrone soup and some multigrain on the side.  I sat at an outdoor table, perusing a flyer for a pre-Burning Man party.  This morning was so Portland.

So Portland because I was job hunting.  The city had a 7% unemployment rate.  Portland has more coffee shops than gas stations, more vintage digs than business suits, and more bikers than the Tour de France.  It's a big city with a small San Francisco feel.  Many people from San Fran were moving to Portland.  Specially guys wanting to escape from their ex-girlfriends.

Me, with a shiny BA in Psychology, I had the qualifications to work at a coffee shop or as a bartender.  All stores asked for resumes.  Coffee shops asked for a resume.

I had just taken the Max back from my premier job interview post grad, not at a coffee shop, but a naturopathic clinic for an office manager position.  Now, in front of the library I was contemplating whether I was lucid enough to make any major decisions.

The job interview went fine, for my first time.  Except when we started talking about vacation time off.  I sat frozen, struck, when the beautiful long blond haired, gentle faced naturopath said, "1 week for the first year.  And we urge you to take your leave at the same time as us."  Abruptly I realized that I'd be working for a year.  That's not weird, I know, people do it all the time.  But a year of 9-5 was something college had not prepared me to do.

There are those times in life when we see a fork, some turning point.  A million things rational to do, easy things.  But I wanted an adventure, before... before... no forever.

Then I walked across the street into the library and bought a plane ticket departing for Ecuador in four days. Spent the next many months doing things like this, and this.

In the next chapter, around six months later, I finally made it to the mouth of the Amazon, almost two years since Mari and I had last seen each other.  My plane arrived two minutes after Mari left work.  His number was the only phone number I had there.  So I left the airport for a better location to wait.  To the boat harbor where Belem's best brewery is located. There, I'm beaming and freaking out.  I felt glowing, like a polished stone, dipped in caramel.  Alive with anticipation. 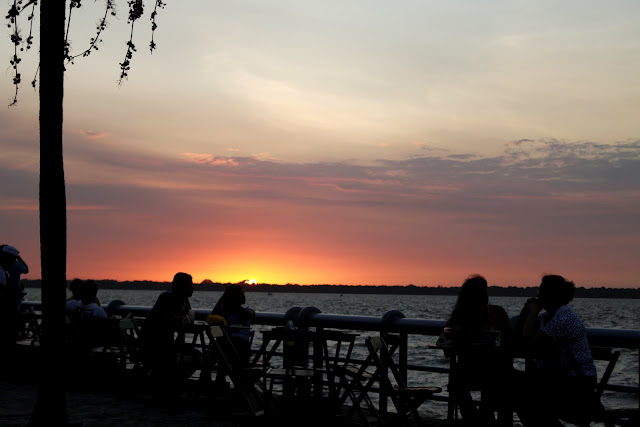 I just sat, watching the boats float by, watching the people float by.  The sun set and live popular Brazilian music began.  I am floating on a ship of lime, love, and sugar cane liquor.  Each drink a little bit stronger than the last.  If I could stop from drowning it would be an accomplishment.  If I could keep my head on the ground for the next hour, that would keep the night real. But already, I'm flying away staring at the palm tree on the dock in front of the clouds above the Amazon waters.  The fronds waving in the warm wind, tempting the sky and streetlights.

I was trying to keep it cool but drunkenness spilled from my smile and splashed the table next to me.  One of the fellows started a conversation.
"Where are you from?"
"I'm from Washington."
"I'm from Rio, he's from Athens Grease, and he's from London, England."
"Well, we're all from capitals then.  Except you cause Brazilia's the capital."
"Yes but Rio used to be, and it is still the cultural capital."

Yes.  He goes to the buffet for a second course.  But first he hands me his card, "I live in Salvador now, if you ever go, call me, you have a place to stay."
I wonder what that means, Mr. Insurance Services.

The #1 lesson I learned traveling as a girl alone is that its dangerous to be nice to a man and trust their words.  And maybe I was naive and sheltered from this in the States, so lucky to always be surrounded by such great guys.  So yeah, it was a learning experience to find that most men try to hump you.

And so I end up in Brazil banking on the hope that the boy I came to find is different.  Because, after six months traveling, I was starting to become a feminist.  Ahhh!  That word used to scare me.

Ack.  This is turning into a really long post.


For me it wasn't exactly the words that he said, but the feelings I got when he spoke.  I always liked hearing him in Portuguese more because he spoke with confidence and without stumbling.  The cruddy filter of a second language just didn't bring the same satisfaction, like a conversation condom.  I mean, there were things I couldn't understand and things he couldn't understand.  We didn't have all the precise words to articulate effectively.  But there was some connection there and I perceived good intentions.

I really fell in love when a week after we met he came to visit me at my friend's house in Brazil with a gift.  He could of brought me flowers like polite guys usually do.  Or he could have brought nothing like too hip guys usually do.  But he carefully selected two ripe mangoes from a fruit stand along the way.  Delicious mangoes won me over, there couldn't have been a more perfect gesture.  It was just my style: romantic but unusual, beautiful and succulent.

And every time I felt a little uncertain about whether we were right for each other, I'd recall the memory of the mangoes.  A symbol of our wordless connection.

It seems crazy that only two weeks after I met him in 2005, we started the process for getting married.  But I'm glad I trusted my heart because now we've been living in the US for 6.5 years and he speaks
English perfectly, and the words he says are the right ones - better than I could say them myself.  I just listen to him and think he's so cool.

I went to the Plaza de Republica, one of the many small concrete parks around the city where cart vendors park themselves to sell ripped CDs, hair clips, coconut water, and other things.  In this particular park vagrant artizens referred to as 'hippies' aggregate and make Amazon jewelry from seeds and plant material and sell it on the street.   I bought us a couple of 50 cent rings made out of a seed and we used these during the courthouse ceremony.  The rings broke in a few months, but we still have them.

I only understood about 30% of the vows I repeated.  The Justice of the Peace who married us was large and wearing a hot pink boa atop her judge robe.  When we handed her the rings, she looked at me and said, "Americana?"  Then she looked at both of us and said, "I hope you guys are legit."  lol.  We didn't even tell his parents.  Mari's sister Carol knew and she was there with us, crying, which surprised me cause the whole event was so surreal.

Dad ended up sending the birth certificate.  My mom talked him into it.  Then when I needed a sponsor for Mari's visa, my dad sponsored him, reluctantly but he did it.  As soon as they finally met dad realized he had nothing to worry about.


And then only four months after Mari moved here, I was pregnant with Kaio.  In a perfect twist of fate, Mari's job contract ended right after Kaio's birth and we returned to Brazil for two months of my maternity leave.  We also had our official wedding then.

And the rest is still being written.