Went out clubing last night with a some friends (well really they're in-laws but that term never sounds nice) and felt like a major dork for not knowing how to dance. The funny thing is that by US standards, I do dance and probably a know a bit more than most girls in the States since I can Salsa and Meringue.  But here that means diddly.  Walking into the club was like walking into a Dirty Dancing movie.  The place was packed and skinny girls in short skirts were being twirled, flung and shaking their tushies like belly dancers to the beat.  I could have happily sat and stared in awe all night, but the lady was singing, the acordianist was playing, the percussionist was boogieing, and the keyboardist, well he was yauning but I'll pretend I didn't see that.  So I shook my tush in a pair of strapy platforms and a strapless babydoll.

Maybe I could have caught on by the end of the night if the band had stuck with one type of music.  But these guys' repetoire resembled a child's colorful sock drawer.  They played Forro, Pagode, Samba, Rock, Brega, Certainaga, and Reggae.  The DJ played Techno, Pop, Trance and Balle Funk.  They even busted out some Beattles and Village People (at which point I took a break).  Every dance has a different beat and step and if you ask a Brazilian how it goes, they'll do some fancy crazy footwork thing totally expecting you to be able to follow.  Here you might be a freak or at least culturally deprived if you don't know how to dance by the time you're 5.

Oh boy did I miss Mari.  You'd think that girls night out on the town looking all sassy would bring you back to fun and crazy ladies night at the frats.  Although it may have served to stoke my ego a little bit (a good thing, right?)  It just ain't the same when the girls are old married or have BFs.  And I realized again that I just don't really like dancing with anyone other than my man.  Especially not the crotch touching sensual Latin dirty dancing movie mambo.  And when I fumbled out of sync doing some new step with one of my SIL's friends he looked at me like I was lying to him and pretending I didn't know how to dance. A few minutes later he said goodbye and left the party! That's how unbelievable it is to be a girl that doesn't know how to dance around here.

So if you come to Brazil, take a few dancing classes first and bring your party clothes.  It's such a blast! 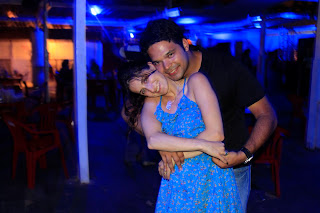