We spent the night sharing a shack with a mestizo family settled along the river.  The dinner consisted of a bowl of rice and single drumstick of some fowl.  Yeah I'm not sure exactly what kind of animal that was.  No chairs or table, we ate on the wood planked floor of the raised hut.  The mother, gernoursly but dutifily handed us dinner and then stared at us with quiet bewilderment.  As usual I gravitated towards the three young children who, under direction of their mother, were hushed to a distance.  She was scared we might bite or attack if bothered, so the kids repressed their curiosity.

After a night passed and we hadn't eaten any of the children, the mother permitted them to play with us.  They excitedly showed us a school workbook that a passing traveler must have gifted them.  It didn't look like they understood what the book was for or what it said, but they liked the colored print and images and asked us to explain what they meant.

I packed light, minimalistic, living out of a backpack for months.   My 5"x7" journal held stickers pressed between the sheets - to gift to children encountered along my travels.  I think I had HelloKitty, farm animal, and flower stickers. The kids coveted them like diamond jewelry, staring wide-eyed and delighted by the intricacy and precision captured in such a small image filled with vivid exotic colors.  How do they interpret these objects through their frame of reference?
What's a cow?
This sticker looks rounded like a coconut
straight like a tree trunk
angled like a chipped rock

The walls of the hut: barren as a new studio apartment.  In this place so rich with nature and life, you felt the stark absence of art or creativity.  You felt it like a missing limb; a ghost arm on an amputee.
Art is a luxury in a sense.  Access to mixed media like crayons and glue is a luxury.   If these children of the forest could draw, what would they draw?   Would their parents hang the drawings from the walls like we paste them to the refrigerator?  Or would they throw them on the muddy ground below the house, with the rest of the trash.

This tiny riverside community of six families and six homes, suspended above the mud, seemed lonely in it's isolation   The families being mestizo had immigrated their from one of the outlying cities, they weren't natives.   They probably had to learn to hunt and what fruits were safe to eat.  They complained of how expensive bags of rice cost.  It mystified me that in an old growth rain forest stocked with bounty, a family could be so poor.  This was no FernGully.

Ellen was starting to get antsy.  She worried that Artizo left us for good.  She worried that we would be stuck on this river for weeks.  She needed to get back to working on her Watson Grant.  I stared out into the jungle, a canoe waded on nearby marshy lake, "We could build a canoe!"

"But what would we tie it with?"

As we formulated Plan B, the night began to settle.  A pregnant woman from the neighborhood walked by wearing a faded aqua green halter top and ragged cotton shorts.  Oh and carrying a huge machete.  With the help of a friend, she chopped of a melon-size jack fruit and lugged it back to her hut.  I wondered if she was going to eat the whole thing herself.

The teenager of the house strapped a riffle to his chest and set out for the evening hunt.  Ellen and I watched the rain fall down from the palm frond roof, creating a blanket of drops like the backside of a waterfall.  Amazed that the house acted as a sanctuary from mosquitoes.

"They don't come in here."  The man of the house said.

He pointed to the fronds hanging down from the roof, "It confuses them."

Later I learned of a trick to keep mosquitoes out of your patio by hanging plastic bags with water from the canopy, the water reflections somehow deter them away.  I think these houses use similar technology :)

Night time Ellen and I settled into our tiny green hammock, strung to the roof beams about the house.  We only had one hammock to share.  In the jungle regions the 'bed' of choice is often a hammock.  Support hooks are built into the foundation of every room in the house and most everyone naps in their hammock. Guest beds are usually... hammocks.  They come in various sizes, think 'twin,' 'queen' and 'king.'  Well Ellen and I weren't exactly sure if we would need one and traveling on a shoe string we settled on cheap $5 green one.  Oh boy did we regret not shelling out an extra 5 bucks for a second!  This ended up being the equivalent of a twin size.  We were pretty cozy during the trip and very sleep deprived!  I think that night each of us took turns sleeping on the hard wood floor.

We woke up to late night loud and obnoxious belly laughter.  The middle of the night bustle confused me but Ellen ventured out to see what was going on.  I shrugged it off and fell back asleep, happy to have the hammock all to myself.  She came back, elated, "It's a boat and they'll give us a ride to the city."

As soon as the vaguest light of the morning shone through the rain forest mist, we were packed and staking our claim on the boat.  Ellen did not want them to leave without us.

We left so early the children weren't up yet.

Walking on this boat, I had no idea we were privy to the truly rare portal to visit with the peoples of a remote world, living almost entirely unattached to modern progress and laws. 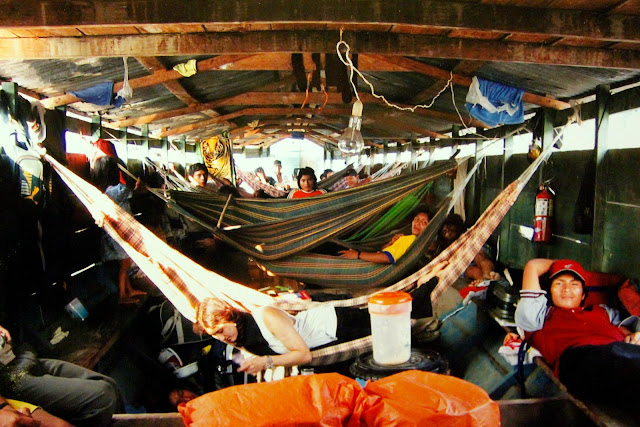 A boat chartered by an oil company to transport a group of community leaders from the Ashwar Indian tribe. The only native tribe of Peru that successfully defended itself from the tyranny of Spanish Conquistadors.  The warriors of the forest who famously shrunk the heads of their captured enemies.
And we were on a boat with their local tribal president, heading to one of their primitive settlements. We were on route to their village deep in the jungle.