We had two more events today in the Special Education saga.  This morning we visited a Montessori preschool close to  my work.  Kaio was very intrigued by the classrooms full of kids.  He wanted to peek through the windows and crack open the doors to see what the kids were doing.  The school seemed huge to me.  It had 5 classes of over 20 students each.  I could tell that he really wanted to be with the other kids, but was nervous to talk to them or enter in the classrooms.  He is very outgoing when there is just one kid around.  But more than one kid and he becomes timid.  We left the school and I felt like the signs point to him wanting to join a preschool, but not that one. 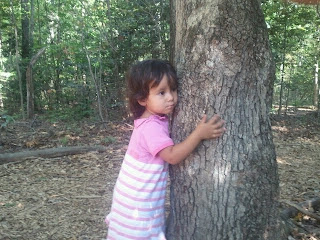 After the Montessori visit we went to the Walker Nature Center in Reston for a walk in the woods.  Kaio remembered immediately that this was the same place he had rode his bicycle before and he started begging for his bicycle.  I was able to calm him down by explaining that it didn't fit in my car, and this time we don't have a bicycle, can we still take a walk without it... etc.  We took a walk to touch and see nature.  The kids both liked picking up interesting rocks and acorns.  Nala started filling up a little purse with acorns, and Kaio asked if he could take some rocks home with him.  I think next time I'll bring some little bags for them to stow interesting finds.  We has a fern tickle fight, and Nala hugged her first tree.
In the afternoon I went back to the Special Education office for their recommendations on where to place Kaio and his Individualized Education Plan (IEP) while the kids napped.  As I predicted, they recommended that Kaio attend a minimum 3 days a week in the mornings.  The problem that I am still struggling with is how the class does not have kids his age.  Even when they will get 'normal' model kids from the community in November, those kids will be 3 years old, not 4 years old like Kaio.  The idea of free daycare is really enticing.  But I keep thinking of how Kaio reacts to being pressured to learn things.  He ignores the questions and tries to get out of the situation.  I observed this when we visited the classroom.  He was playing with a train set and the teacher kept pushing trains in his face and asking him to pick the yellow one.  I know that he knows his colors but he just didn't want to answer her because he was not interested in the question.  I think that he understands that people are pushing him, and he rebels from that.  I was the same way as a kid.  When my grades fell in school I remember feeling like I wasn't satisfying my parents.  When they started sending me to psychologists to figure out what was 'wrong' I resented them for not trusting me to be me.  Public School classes did not interest me.  I used to read books under my desk during class.  It's not that I was a bad student.  I did really well in college, and now I do great at my job.
When I asked the SE teacher about how he would meet his goals on socialization and communication without peers to socialize or communicate with, she said that most of his goals are measured through adult participation and prompting.  So adult coaching will help him and he can play with other kids in settings outside of the SE class.
I am contacting a Farm School that has afternoon preschool to see if that is something that he can do in tandem with the SE.  I think that is the only way that I will feel comfortable with this change.  But even then, I keep shuddering as I picture that teacher pushing the trains in his face and saying. "Which one is the yellow one. Kay-o?"  As he is peacefully constructing his railroad track and talking about the train scene.   Shouldn't I just let him be a kid?
When I started this whole process, he was at a place where he seemed sad, withdrawn and slightly vacant.  But now-a-days he is so happy and social.  He is progressing with speech in both English and Portuguese.  Today we went to the gym and he walked into the kid's play area without fight.  He took his shoes off and went to play with the big room full of older kids.  I peeked in a couple times and he was constructing legos with some other kids and talking to them.  So I just don't think there is anything wrong with him.
Until I start comparing him to other kids.  Then I see that his sentences are not as perfect as there's are.  I see that he erupts with frustration and cries more frequently.  But I'm not supposed to compare to other kids, right?
at 5:40 AM