Catching up on the last couple weeks 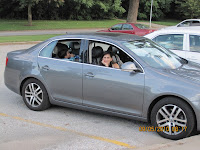 OK We are back from our two week family road trip and life much improved from my last post.  I think that acknowledging the difficulties helped me switch gears to Carpe Diem.  That particular day did get worse before it got better, as we discovered that I accidentally left Mari's wallet in a gas station in Mulan, Idaho: three hours behind us!  That would equal an added 6 hours to the trip, which is over a half day of driving.  Luckily with today's smartphones I was able to find the phone number of the station, call, and convince Joe of Joe's Station to mail us the wallet.  That made Mari feel a little better.  We took turns driving at night for the next two nights and ended up having time for a couple decent and fun pit stops along the way. 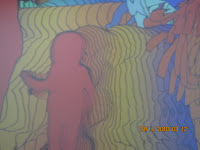 One of my favorite stops was at the Kohl Children's Museum.  Who knew Chicago had so many cool things going for them?  The kids loved it!  They played like crazy straight through nap time.  All of the exhibits are hands on interactive.  There was one exhibit devoted to music with a number of multi sensory toys, including a room with music playing that projected your image with trails on a giant projector.  It was exactly the kind of multi sensory situation that Kaio normally runs away from.  But being in the kid's museum amongst so many fun activities he did give it a try with some coaxing. The whole family shook out booty to the beat and watched the pretty rainbow patterns morph to the rave music. 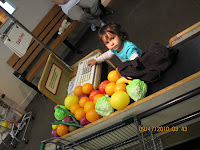 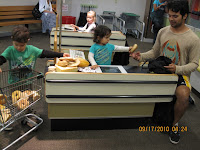 There was another exhibit made up like a pretend grocery store.  Nala went in and packed her cart with fruits and vegetables.  When Kaio went in, he B-lined for the bakery and filled his cart with every bagel and bread product in the store.  What does this obsession mean? Is it because we are repressing gluten from his diet?  I've not sure how to interpret this.
So then we made it home happy and healthy.  I think the kids really liked having all the one-on-one time with us in close quarters.  We got along well.  There were a few difficult times getting the kids to stay in their seats and follow directions.  But we would of had difficult moments no matter where we took the vacation.  I will try to post later with more highlights from places that were successful with the kids.
Since we have been back Nala got kinda strangely struck with a vaginal itch a couple nights ago.  She couldn't sleep until 3am because she was itching up in 'there'.  But no rash or discharge.  I couldn't figure out what was wrong with her.  It didn't seem like a yeast infection, or a UTI, and no sign of worms.  Finally she fell asleep on my belly at 3am.  She has been fine since then.  So odd.  Please let me know if anyone out there has any ideas.  I googled but found nothing.
Today we had an appointment to visit the Special Education Pre-School that Kaio might attend.  I'm still not sure what I think of all this fuss over his latent speech development.  When we got there he was talking up a storm to the teacher.  He took her hand and pointed out all the things that he was seeing around the school, "owl! wolf! look kids!"  The teacher said, "He seems really different from his file."  Yes just another mixed signal that I'm getting about whether he really needs 'special' education.  Sure he talks a bunch sometimes, but he rarely responds to direct questions.  Actually Sunday was a first when I asked him to tell Grandma Helen what types of animals we saw on our road trip and he actually responded by naming animals.  Sure the first one was 'elephant' (which we didn't see) but maybe he did see one somewhere.  The rest of the animals were in line with the trip: deer, elk, buffalo, a cricket.  So I was really impressed that he answered a question about something in the past that was not related to trains.  It was a milestone!
He learned how to use a computer mouse and for the last few days has been doing Thomas activity games on the internet, like coloring and matching games.  My mom got him tangrams, which he figured out immediately.  So he is pretty good at spacial thinking.  I'm just not so sure what to make of all of this.  I don't think that I want to put him in that Special Ed preschool.  There are only two other girls in the class and they are both younger than him and gross motor skills challenged.  I know that he will get tons of personal attention from a professional special education teacher, not to mention FREE pre-school.  But I just don't know if he will be happy in a class without peers.  I want to explore Montessori and other preschool options to see if maybe a different learning approach would be better for him than the in-home daycare that he is at now.
I also went to a cranial dentist appointment today where the holistic dentist gave me the results of my biometric exam: x-rays, MRIs, measurements of my facial alignment, jaw range of motion, and tooth molds. My teeth curve inward instead of outward like everyone else's because my childhood dentist removed four of my permanent  teeth to prevent overcrowding before braces.  This is causing daily trauma, and also makes my bite so screwed up that my teeth don't touch when I close them.  Really, other people's teeth touch?  apparently so.  I put the $2K down payment on a piece that will begin the process of correcting my bite.  I'm also getting the rest of my mercury fillings removed in two weeks.  I am so excited about this!  It is a major financial decision.  But hopefully insurance will pay back some of the cost.  And I have faith that it will resolve my neck pain.
So basically I have been out and about this whole day, even though I was supposed to be back at work.  I better get a lot done tomorrow to make up for it.  In surprisingly good news, I found out over the vacation that I won an award at work for doing such an excellent job over the last year.  I can't believe that they are giving me an award when I feel like such a loafer taking off two days a week to hang out with my kids.  I guess they really do like me, and it is nice to feel like I'm good at something even though it isn't exactly what I want to be doing with my life.  Isn't it ironic?
at 12:48 AM