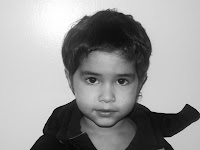 Tonight LM stripped off all his clothes totally by himself.  Oh I was so proud that he is so independent and has picked up the coordination to do that.  Then he ran around the house naked for an hour or so.  How nice that he is potty trained and I don't have to worry about him pooping on the floor anymore.  NA was not tired at bed time, not at all, and there was nothing else to do but let her play and blow off some steam.  I gave her a mini manicure and pedicure, and then moved on to LM.  He was busy climbing on chairs and dressers, but he did come over and sit still long enough to let me cut his toe nails and put some tea tree and lavender on them (there was skin flaking and I think he may have a fungus from being obsessed with wearing socks nonstop).  So while I'm tending to his feet he is all naked and playing with his Little Man part.  Then I see wet like water by his crotch and he cups some liquid in his hand and brings it up to his mouth and sips from it.  WTF?  did I just see that?  "LM what are you drinking?!  That better not be pee!  Take your hand away from your mouth!"  It sure looked like water, and there was a cup of water near by... but...?  I told Mari what I saw and he kind of chucked and was like, "sera que nosso filho a retardado?" or "is our kid r*t*rded?"  I don't know.  I'm going to pretend that I didn't see that and move on.
The kids were both completely off the wall tonight.  I don't get it.  All they had/wanted was Great Harvest Guinness and Gouda Bread for dinner.  Could it have been something in the bread?
We went to a hobby shop to get some balsa wood gliders for preschool next week.  LM was like a kid in a candy store and love it loved it loved it.  He would have slept there if that was allowed.  He had a bit of a breakdown when we left.  I swear that he cries 10x more than the baby does.  She almost never gets upset about anything.  Well, so he wanted to move into the store.  Even though we had a bag of some modest goodies to play with at home he didn't care, he wanted to stay in the store and look at the airplanes, helicopters, boats, and monster trucks.  I tried reasoning with him, but it was no use.  He was sad and cried in protest, but didn't quite hit tantrum mode.   Later, when i was tucking him in for bed, I asked him if he wanted to go back to the plane store and he sat up and walked right out of bed, "Yes!" like we were going to go right then and there.  It's cute that he is so into this stuff.

In other news I woke up three days ago feeling the urge to vomit.  That was scary to think that i might be pregnant.  I am sure that I am not ready for a big belly again.  I checked and my IUD is still there.  So I just don't think that it is possible.  The web says only a .6% chance.  So I thought it must be the Koren food that I ate the day before.  But I have been feeling ssssoooo tired lately and getting headaches after eating caffeine or drinking beer.  I guess that I need to take a test just to dispel the paranoia from my mind.  Man wouldn't that change things?  We would have to move out of town, there is no way we could afford another daycare bill!
at 1:02 AM