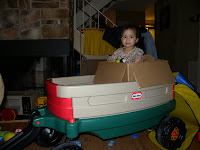 Nana started day care this week and she has been loving it.  She also came down with a nasty cough.  I knew that the illnesses would be coming along with the daycare.  But so soon? 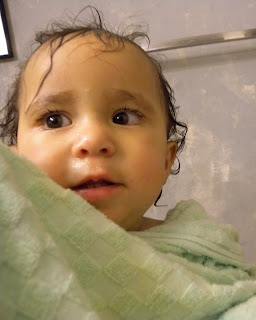 Anyways, it happenned in the middle of the night two nights ago, she started hacking and wheezing, very scary.  That was the sickest that I have ever seen her.  I nursed her to sleep and watched her breathing for a while.  I think that you are supposed to take kids to the doctor when they are having difficulty breathing, but she fell asleep nursing and I just couldn't imagine a trip to the hospital being better for her than letting her sleep and letting her body heal itself.  She woke up a couple times more with the scary cough and wheezing.  In the morning she was smiling and with a productive cough, but no more wheezing.  I took her to one of her daycares (we have three different daycares right now: CrunchyCoOp on Mondays, Kid's Learn and Play on Tues to Thurs, and Terri's house on Fridays.)  It is a little crazy schedule, but I think it reflects the short attention span that kids have and lets them be influenced from lots of different perspectives instead of just the same thing everyday.  So I took her to Terri's house and told her to call me if she was concerned with the coughing.  She never called, but when I picked her up she still had the cough.  I haven't given her anything but a shower, with the chlorine filter.  I changed the bed sheets and put a blanket down to provide more of a barrier between the mattress and her face.  I am a little worried that the cough might not be a virus, but rather a reaction to our TemperPedic mattress's off-gassing.  We have had the mattress for three years now, but I think that they off-gas forever.  She was sleeping with her face strait down in the mattress before she woke up with the nasty cough.  So she seems better now.  Her immune system must be really strong.  I remember that Kaio never got sick while he was breastfeeding too.

Next step will be getting her in her own bed or crib and then hopefully the night coughing will stop completely.

On a side note, Kaio used to get coughs all the time for months at a time.  Every time he got sick he would have a lingering cough.  Well, we replaced our carpet with Cork flooring in November and he has not coughed since then.  He has gotten a cold but no lingering cough.  it is still early to tell, but I hope that gross carpet was the trigger.  We love the floors, and no trees harmed or chemicals!