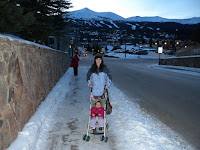 If you value your marriage, do not attempt to teach your wife how to ski.  My brother took his wife out on the slopes to share his love of skiing with her. They are still together, but it was tragic.  At one point she took her skies off and sat down on the slope crying.  Once she finally got down to base, she never went back up again.   He was upset and disappointed with her for not being  able to handle it.  He calls it 'Tiny Heart Syndrome.'   We all should have known that it would not work out though.  She cried when we took her on a roller coaster, and she was too scared to roller skate.

I made a similar mistake today when I tried to force Kaio to come on the slopes with me and Mari.  The daycare here is over $100/day per kid.  My mom said that she could watch Nalini, but both the kids would be too much.  So I wanted to take him on the slope, and have some quality family time.  But he fought it every step of the way.  First he didn't want to put on the snow pants, then he didn't want to measure his foot for the snow boot, and then he didn't want to put on the snow boot.  Every step I was able to convince him.  But the final showdown came when we were getting dropped off at the base camp and he started screaming because he didn't want to come with me and Mari.  He screamed like we were hurting him and it really made me want to smack him.  "give him something to cry about" as my dad used to say.  It is just so frustrating and insulting when you put so much energy into trying to make someone happy and then they scream in your face like you are hurting them.  After an hour of getting ready and renting skies and buying glasses, all to see his little happy face skiing down the hill, I gave up and threw him back in the rental car with my mom.  She said that she would take him.  I wish that she had said that sooner, so I had not gone through that whole ordeal.

He really just isn't ready to take on the mountain and the skies.  And I wish that I hadn't tried to push him, but rather let it happen naturally.  I am not going to go through that again. 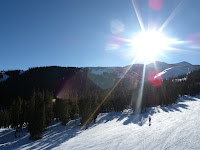 So then Mari and I spent a beautiful day together at 12,000 feet, and enjoyed good Colorado beer from the top of Peak 9.  The next day I convinced him to come to a yoga class with me.  It was much more difficult then he thought it would be :)