Things aint so bad really.  I was looking over some of the last posts and they are a bit disturbing and intense.  Sure, mari's care got stolen, but we are really not that troubled by it.  I guess this demonstrates how unattached we are to material items: the car was filled with stuff and as each day passes I remember something else that was in there.  Today I realized the earrings that Mari gave me to wear on our wedding day were in there.  So sad.  He came up with a little proverb about how fingers die but metal endures, or something like that that didn't make sense to me.  But it seemed like he was trying to say that they were just a couple pieces of metal and nothing more, so it will be ok. 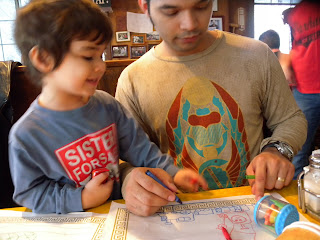 So with all the credit cards cancelled, we have been planing well to ration the food we have.  It is a good exercise in moderation and premeditation.  It is also timely, because with Mariano's cousin visiting from Brazil last month, we started going out to eat to show her the glorious varieties of delicious cuisine available in our region.  Now we are being forced to kick that habit.

The house looks great with our new floors.  Plus, Kaio has not been coughing, which is the most important thing of course.  I hope that it holds up, we'll see if he starts coughing again after the new year, that seems to be when he usually gets sick. 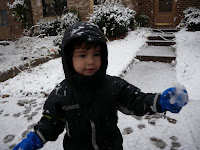 I have been trying out some unschooling techniques, since one of my HMN friends sent out a blog post about unschooling philosophy.  hmmph. though I think that Kaio maybe a little too out of control, immature, wacky, or something for it.  I've been letting him make his own decisions and have more control over things all weekend and... well I wouldn't say that I've seen much progress.  He wore his Lightning McQueen sneakers out in 6inches of snow instead of his boots:  result = wet shoes.  He didn't go to sleep until almost 11pm and he was exhausted.  Then on Sunday I made pancakes for breakfast, but he wanted cereal: result = processed food instead of healthy fresh food.  He also was super whinny in the afternoon, but he may have just been tired.  I was really trying to be a good unschooling parent and say yes to everything and find teaching opportunities in every situation.  But sometimes Kaio doesn't know what he wants or he changes his mind, or he drags me all over the place.  It seems like the more I give him what he wants, the more he wants things and the more whinny he gets.  I think, like all of the ways to be a parent, I have to pick and choose what works for us and not be extreme in any parenting style to the point where I'm unflexible. 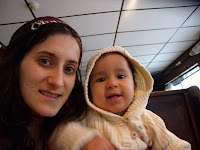 Nalini has started smacking her lips when she wants food.  It is so cute, and a great way for her to communicate with us.  She also started doing some hand signals too, like milk and drink. Kaio and her play together sometimes and it is super cute.  Today we were walking down the sidewalk together.  I was holding one of her hands and Kaio the other.  She was so proud of herself to be walking in step with everyone and her big bro.
So things have been going pretty well :)
at 11:35 PM