Sitting in traffic for two hours, the day before a blizzard, and I was so pissed at a seven year old.  Or actually, I was pissed at myself for inconveniencing myself for a seven year old.  Friday morning, the weather report added more inches to the snow forecast every hour.  By 4pm, they were projecting 10-20 inches and everybody and their mother was heading to the grocery store for provisions.  I was more concerned with scoring a sled.  But, alas, there was a sled shortage in Northern VA and we were forced to try to improvise with large plastic storage bins.  We were not the only ones in the store with this idea.
So Friday at 4pm, in the mouth of the madness, I drove to Leesburg after work to buy a child rocking chair for Nala, because she keeps sitting on things wishing they were little chairs (like piles of shoes, pillows, and steps).  I know she just wants a little chair that is her size.  So, yeah, I drove half an hour West, past an outlet mall, the day before a blizzard, to meet a woman who posted her daughter's chair on craigslist.  And when I got there, it was one of those typical cookie-cutter fancy-smancy houses that popped up during the housing boom, like colonies of mold.  So the mom had four wild, out of control kids and an equally out of control dog.  One of the daughters proceeded to have a breakdown because I was taking her childhood chair while the son was rocking back in forth in it, outrageously, and then letting it topple backward.  Then the two other daughters were running in circles around everyone and knocking things over.  The mother didn't know what to do.  The daughter was very upset, and the mother tried to reason with her, "Madison, I am selling the rocking chair so that I can buy you new presents."  That helped for a minute.  Meanwhile one of the daughters runs up from the basement, "MOM!  Ashley peed in the plant because I told her to!"  The mom didn't even hear her, she was too busy trying to stop her son from breaking the rocking chair and trying to figure out if she should console her daughter or push on through the deal.  I was thinking this would be a pretty good preview to my life if I would have more kids.
I ended up insisting that the daughter keep the chair.  My grandmother gave me a little wooden rocking chair when I was a baby.  She embroidered zoo animals on the seat.   Now, it breaks my heart that I don't have that chair to give to little Nala.  My dad gave it away to charity along with every single other relic of my childhood when he moved into a new home with his new wife.  I was away at college on the other side of the country.  So when I asked him about the chair, he said that it must be around somewhere.  I searched his whole mansion.  No chair.  But, I did find our old projection tv, and an old 286 computer.  He saved a freaking 286 computer, but he didn't save the hand embroidered rocking chair that his dead mother made for his baby daughter!  It sunk my heart, thinking of how my dad valued his toys over his family, or how much more value he put on commodities than heirlooms.  If I made him feel guilty for not saving it, then he didn't show it.   Dinner was just as normal, and weird, as always.
Since  then I haven't stopped thinking about that little rocker, and so when the girl was crying to keep her childhood rocking chair, and the mom was feeling really torn because she knew how far away I had driven to pick it up.  I told the mom it was ok, hoping that Madison would save it for her daughter someday.
That was my opinion until I got stuck in traffic on the way out of Leesburg!  Then I was cursing the spoiled brat.  I had even taken the Green Way to get there - a $5 toll!  And because of an accident on the road I missed the first hour of Kaio's Christmas Party. 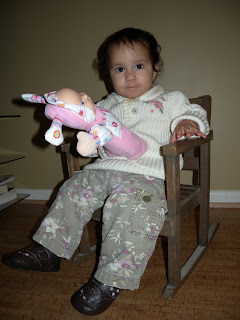 But then the next day it snow-stormed: Blizzard of 09.  I made a post on Freecycle, asking for a rocking chair "pick up in shine or snow".  And I ended up with two responses and two perfect rocking chairs, so now Nalini has a place to sit downstairs and upstairs.  Boy does she love it!  When she first saw the chair, she ran over to it and looked at me with this huge smile and a look in her eyes that said "Really? a chair just for me?!" it was so cute.
at 10:34 PM