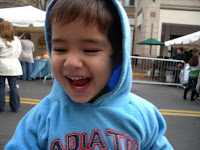 Fight at bedtime with the three year old.  He is so strong willed and stubborn.  Just like I was - that little bugger.  Tonight was a fight reminiscent of a year ago when, for months on end, Kaio would not stay in his bed at night.  He would get out of bed repeatedly for over an hour before finally staying there and falling asleep.  I tried everything from staying in his room until he fell asleep, to picking him up and putting him back in bed every time he left, to just finally locking his door shut.  Finally, one day he actually stayed in there when I gave him the choice of having the door open or closed.  He chose open, and I said that if he got out of bed then I would close the door.  Well, I still don't know if that was the trick or if he just finally got over the phase he was in.   But it worked for a whole year, until tonight he did it again! ugh.  Here is how it went down:
Act 1
-Kaio exits bed for third time
- "Kaio if you get out of bed again I am going to take away Thomas"  (he sleeps with his Thomas the Tank engine)
- I return down stairs and gobble a big bite of my mac and cheese dinner
- foot steps heard leaving the room
- I run up stairs and take Thomas away
- Kaio cries
- I return down stairs and stuff another big bite of mac and cheese in the trap

- I run up stairs and without a word, shut the door

- "Kaio if you get out of bed again I am going to close the door and I am going to lock it!  Voce nao pode sair da cama, si voce saia mais uma vez, eu vou troncar a porta!"

- I go and shut the door and lock it

- Kaio cries, and the cries get worse when he tries to open the door and can't

- I sit on the stair, head down.  why did it come to this?  I told myself never to lock the door again.

- Deep breaths. I will part with the hope of finishing my dinner for now.

- What would my sisters in HMN do?

- one more deep breath, put the leftover mac and cheese in the fridge

- pick up the bottle of lavender oil.

- I return up stairs and into kaio's room, where he is sitting up in bed all teary faced.  I cover my hands in lavender oil, lay him down, and start massaging his neck and chest.  He says, "thank you.  thank you mamae." I silently massage his whole body and then tuck him in again.  He's jabbering about something, "I want Percy for my birthday... baby is sleeping... I want to go downstairs... I want water..."  I massage his face and pet his hair.  I went threw the list of the people who love him, and then I reminded him of what we were going to do tomorrow.

- He turned to the side like he was getting ready to sleep.

- Then I said good night and left.  He looked to make sure that I didn't close the door.

Man, i think that worked, and I finally got to finish dinner.  The End