Sweet thoughts on time and love 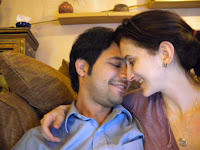 We used to make love to candle light, but now we make love to the light of the nightlight. I would say that it is strikingly less romantic and more practical, given our current circumstances; but tonight the hue of the nightlight was reminding me of the glow from the street light and the moon the first time we ever made love. It was this exact same tone. I remember the way it made his skin sparkle like lake water in the moonlight; deep, calm, and mysterious.
Now so much has changed since that day. I can't believe that we have two kids, two cars, a house, jobs, plants and stuff. I think it is amazing to think of all the time and space between this moment and the past, and yet it feels so identical and clear. I guess this is where the phrase ' i remember it like it was yesterday' comes from. After 7 years, 3000 miles, a college diploma, trekking the Andes, two kids, two dead relatives, one cancer surviving aunt, five weddings, and did I mention two kids yet? - because that's important. - after all this and more, we're still lying on a mattress thrown on the floor, naked and holding each other. If I could have seen a window in to the future on that day, what would I have done?
I think I definitely would have still taken the blue pill and fallen in to this magical dream, that seemed so crazy at the time but has followed with so much love all around.
Kaio woke up as I was dozing to sleep with that loving train of thoughts in my head. He was making noises in his room, and we decided to invite him to come into bed with us. Nalini was in the crib next to the bed, but in the middle of the night I brought her in bed to feed. In the morning we were all there, sleeping in what ever direction gave us a spot, and sharing some corner of a pillow. I wish that my camera had juice because I definitely would have taken a picture to post with this posting.
at 9:57 PM