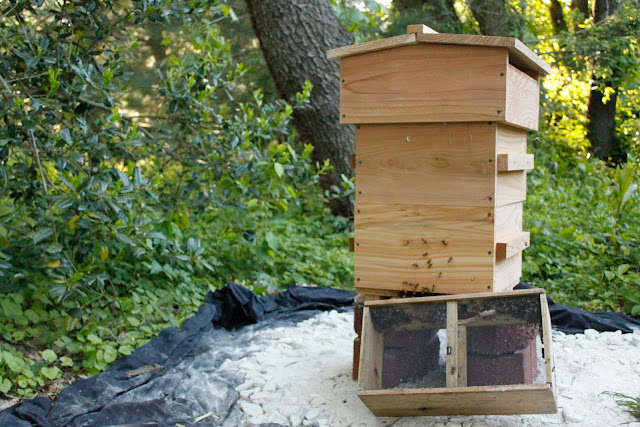 "So we getting some honey!?" my capricious neighbor hollered from her screened in porch.  A widower with tacky home decorations and way too many potted plants in big ugly pots, she often says odd things that don't really make sense.  She's unpredictable, so I did not know how she'd react to the bees.  For this reason, I neglected to mention to her or ask her blessing for the hive. 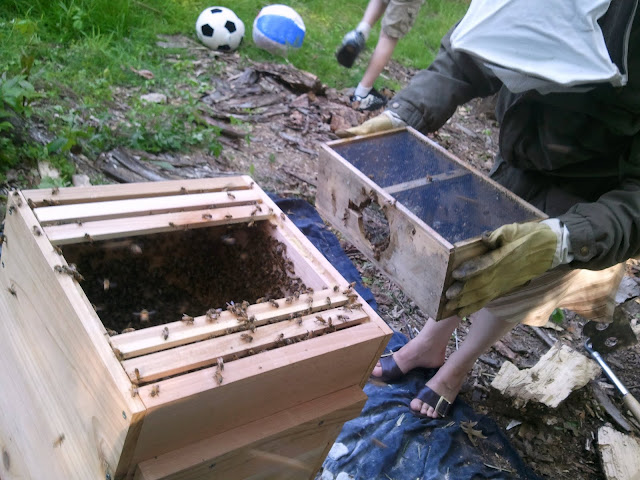 She must have seen us dressed in bee suits fumbling through installing the 3lb package of Georgian bees,  My friend came over to help out.  Mari declared a couple months ago that he was already stretched too thin and would not be taking the lead on the bee keeping hobby.  That was a little frustrating since we had enrolled in the Intro to Beekeeping class together, and it looked to me like he was wussing out.  To his credit, he has helped a bunch, I've just had to orchestrate and manage.  like always :).  That's what wifes do right?

I'm always fashionably unprepared, and today was no different.  The bees arrived and I realized we had no veils, no hive tools,  no smoker, no bee brush or spray bottle for syrup water.  I abhor buying specialty appliances and tools for things.  I'll ghetto rig it whenever possible.  But, once faced with the little buggers, I started to freak out a bit. 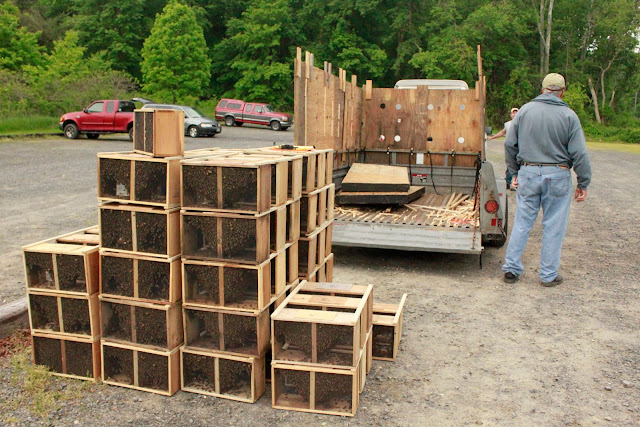 The pick up was 8am on a rainy Mother's Day at Ellanor C. Lawrence Park in Chantilly.  Dane had driven over a hundred 3lb boxes of bees up from Georgia in two hitched U-Haul trailers all night long.  The arrival date had changed 4 times due to weather.
"Welcome to the world of farming."  They said.  "Nature cannot be counted on to make a deadline." 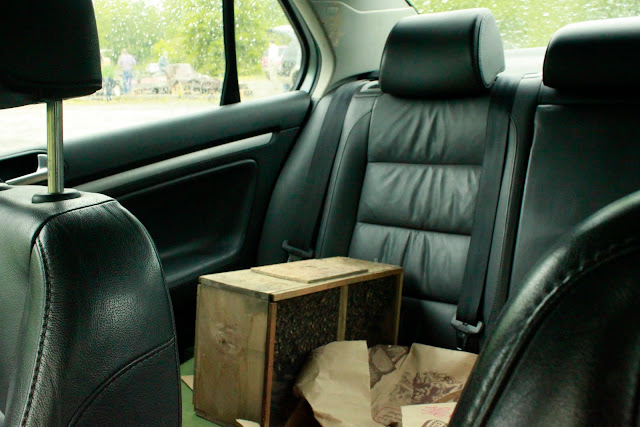 I stopped at a hardware store on the way home from the pickup and grabbed a spray bottle and some cement bricks for the hive to stand on.  The checkout was super long and the woman next to me in line inquired about my project.  She was astounded that I had a box of bees sitting in the back seat of my car.  Before she checked out she said, "Well I'm glad the line was so long so I got to hear about your bee story." 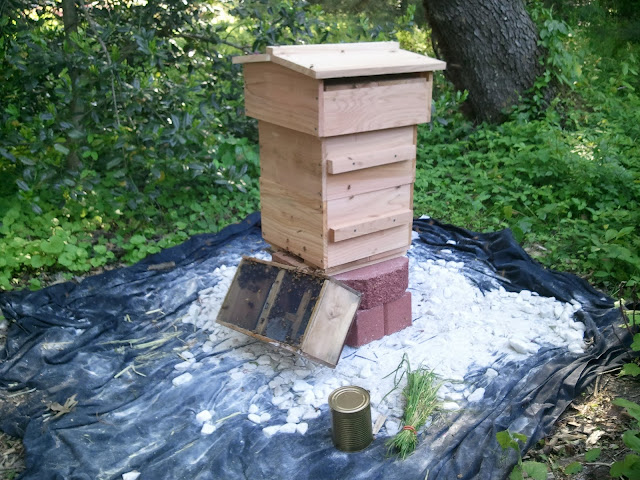 Our hive came unassembled from Beethinking in Portland and is made from sustainably harvested cedar.  The cedar deters ants.  Warre hives, also called the People's Hive, are uncommon in the US.   News of their successes has not made it mainstream yet.  We don't know anyone else with a Warre.  My mentor suggested I become the official Warre expert of the DC area.  I never shy from the exotic and smart, that's just my style.  Most people build them from scratch as plans are available for free and in the book Beekeeping for All by Abbe Emile Warre.  We lack wood working equipment, so I decided to buy the hive precut, at least this first one. 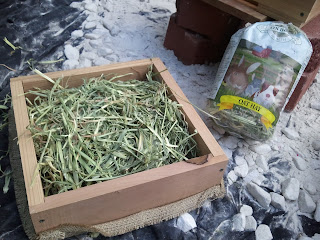 My mentor loaned me his veils and one jacket.  That southed my nerves a bit.  I have some mosquito netting and was planning on making a veil, but borrowing a professional one is even better. We made a bee brush out of long grass and used a screw driver in place of a hive tool.   I stopped at Petco and picked up oat hay to fill the quilt box above the hive.  This box keeps the bees warmer during the winter and also sucks moisture out of the hive (a distinguishing feature of the Warre).

It was trippy to pour bees out of their box into the hive.  Overall easier than I anticipated.  But certainly a trip.  There were many bees remaining stubbornly in the box.  Our solution: I held the box over the hive while my friend smacked the top of it to dislodge the puppies from the walls.  Shake shake shake, and they fell in the hive with their sisters.  I had wanted to film it but we didn't have enough hands. 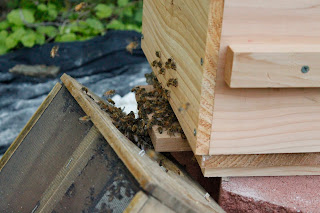 I checked on them before dusk and most of the bees had left the box and entered into their hive.  I'm crossing my fingers that it works out and they like their new home.  Sometimes bees will swarm to scope out more hospitable conditions elsewhere if they do not take to the hive or queen. 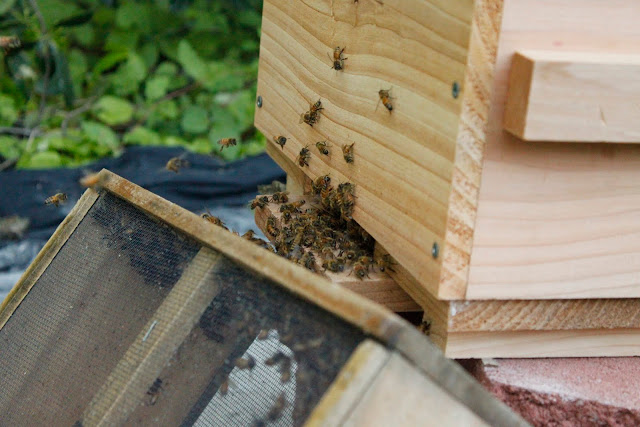 The kids have been strong supporters of our new pets.  They watched the populating of the hive from our screened in porch.  We've been acting out the bee lifecycle at home: building comb, propolizing the walls of the hive, pollinating flowers, bringing pollen back to the hive on our thighs and making honey.  Everyone is excited, even our crazy neighbor!

What a rush.  One step closer to self sufficiency.  Urban homesteading alive and well.  My coworker and cube mate thinks that we deserve a show on TLC.  Thad be cooool...
at 12:20 AM