It has been really tough trying to figure out how to discipline Kaio effectively.  Sometimes I feel helpless to control him.  And even when I have him under control I feel like that grip can be lost at any moment.  He is consistently testing his boundaries and then he also wants to control of himself.  Today Mariano said that we have to tame him.  I don't like that word because it makes me think of breaking the spirit, but i understand what he means.  Kaio's newest thing is - putting himself in timeout.  He does it now as soon as I ask him to do something that he does not want to do. "Kaio, go sit in your chair so you can have some breakfast."  "No!  I don't want to sit in my chair! NOOOO!  I go time out!"  Then he goes and sits down some where and folds his arms across his chest and puffs a big matter-a-fact humph.  Yesterday when he did this he decided to put himself in timeout on the dryer.  He opened the side door and climbed on the ledge and sat on the doorway ledge.  But when he tried to cross his hands and do his humph-thing, he fell backwards into the drier!  Then he couldn't get out and I had to come over and give him a hand.  IT was so freaking adorably cute that I wish I had a camera to show the video to all the future girlfriends he brings over for dinner.  After I helped him out of the drier he forgot why he was upset in the first place so that was good. 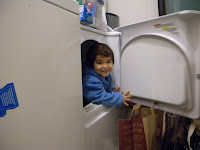 I know that this behavior is his way of trying to maintain control over his place in the world.  He thinks that if he puts himself in timeout before I do, then at least it was his decision and not mine.  I always make an effort to give him choices so that he maintains some control over the situation.  But there are sometimes when he just needs to listen to me.  ugh.  Today while I was baking his birthday cake for tomorrow's party, I made him some risotto for lunch.  The rule was that he could eat OR take a nap, and once he was done eating we would go take a nap.  So, he tried a little and then started demanding mac and cheese.  But nope, this is what we have got.  He threw some of the rice on the floor!  That really upset me because I was in the kitchen all day getting things ready for his birthday party and making cake for him.  Then he totally disrespected the lunch that I made him.  I yelled and when I told him to pick it up - he refused, and then I picked him up and took him upstairs to bed.  He was crying.  In bed I explained why I was mad.  He said, "I feel bad"  and was so sad.  I just wanted to hold and hug him.  I know that it is a difficult age for him to understand the world and deal with being so little.  But why can't he just do what I say, dammit?
Sometimes I feel like I must be doing things wrong.  Like today, we went to a Halloween party, and Kaio was off the wall and scattered compared to the other kids.  They all seemed so good and well behaved.  Mariano ended up carrying Kaio out of the party crying because he didn't want to leave.  I am sure that none of the other kids cried like that.
So I keep wondering, is it my parenting approach that is wrong?, is it just his personality?, is it his diet?, is it normal?
My mom said that I was so much worse.  She says that we are doing so good with Kaio.  But I'm not convinced.
at 1:25 AM