Friday night at home with a cup of tea, relaxing, and it feels so good!  The kids are asleep after a full Friday.  Today Kaio went to daycare with Nalini because he wanted to go to "Terri's House."  Terri is the lady who used to take care of Nalini when I worked in Tysons.  Now I only take Nala there on Fridays.  She gets to play with the other kids and keep in touch with such a sweet and loving lady.  Kaio has gone with me occasionally over there when I needed to pick her up.  He really likes all the cats: she has 6 cats, and a fish tank.  So last night I told him that we'd be going to Terri's tomorrow (to pick up Nalini).  Well this morning when he came in our room the first thing he said was, "I want to go to Terri's house."  I couldn't believe that he remembered all night.  So I called her and asked if it was ok to dump him off with Nala.  Then I called his daycare and told them that he was spending the day with Mari (I didn't have the heart to say that he wanted to go to a different daycare).
So Terri said that he was really good and a sweet well behaved little gentleman who did everything that she asked.  She was either being nice, or obviously this was the Honeymoon Period.  Sure, he is super sweet, especially when I'm not around; I guess I bring out the whinny rambunctiousness in kids.  When I went to pick him up, no surprise he started climbing on the couch and trying to scale the window.
The cutest thing happened when I was trying to leave with him to go to the chiropractor and leave Nala with Terri until we came back.  As we were putting on the coat he kept insisting, "get the baby, get the baby, mom"  I tried to explain that we would come back for her, and that semi-worked, until we got out the door.  Then he started crying for her and he even started banging on the door "mom, get the baby, Mom the baby!"  Oh, so I said "ok, I we'll take the baby to Dr. Park with us."  thinking - after all, she is the easy one and never causes trouble and delay.  So we went inside and Terri was holding Nala.  Kaio started saying "Terri, that's Mom's baby.  Give the baby to mommy.  That's mommy's baby."  It was so cute.
I'm glad that we took her because it was easier than going back after the appointment and I got to hang out with the sweetie.  She is all about walking now, all over the place, with a big PROUD smile :D. Then when we got home Kaio threw a little bottle of essential oil in the air and it hit her in the head and she cried.  He had to go in time out for that and he cried.  We went to the gym to take showers. Yes, that is the easiest way to take a shower because there is childcare.  And Kaio loves it because there are things to climb on, and Nala loves it because there is lots of space to walk.  Then we braved a late night (8:30pm) trip for Japanese food.  Kaio started crying when his yakisoba was taking to long.  I thought we were ruining the date nights of some couples.  Then the yakisoba came and he spent the rest of the time stuffing his face with chopsticks and his fingers.  Nala was happy to pop edamames in her mouth the whole time.  We ate tons of food and made a big mess.
Now they are both so completely spent that it was the easiest bedtime ever!

Here are some photos from a nice weather walk by our house. 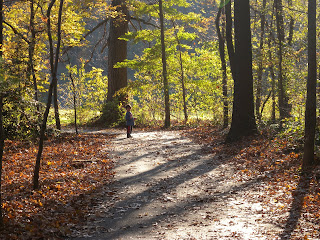 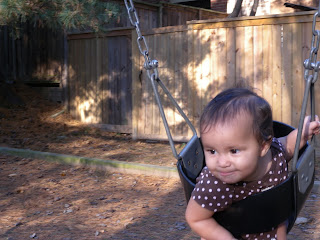 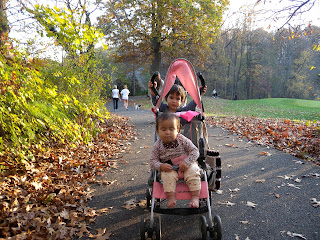 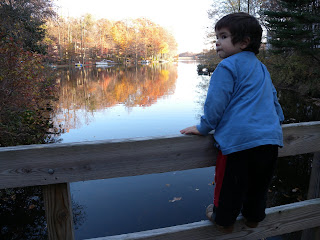