A Subtle Act of Creative Defiance

Today I volunteered at Kaio's school helping with a kindergarten art activity.  As the teacher's aid explained the task to me I couldn't imagine the kids actually doing it.  She wanted the kids to draw symbols on a paper bag vest and write the words for the symbols below.  This was to teach them that Indians wrote using pictures instead of alphabet.  She had a poster with about thirty symbols to choose from, like a teepee, a tree, a girl, a boy, etc.  The task seemed really complicated to me because the kids would have to look at the picture and copy it, along with spelling a word.

I asked, "But what if the kids don't want to draw that and they start drawing something else?"

"Oh they wont do that.  This is the task and it's not free draw what you want time, they need to draw these symbols only.  They'll do it."

She seemed confident the kids had been trained to follow directions.

In came five kids, including Kaio, to work with me on this task.  I was imagining total anarchy breaking loose.  Kids scribbling all over the page and not understanding the task.  My expectations were pretty low you could say.

Kaio walked in with a smile bright as the sunshine, beaming all over his little face.  He sat right next to me, petting my arm, feeling my hand as if I was barely real.  As if I might be an illusion.  As if I was his sweet long lost love.

Kaio whispered and chatted instead of looking at the teacher while she explained the task...   I braced for needing to repeat the instructions all over again.  I worried about how I'd help five kids all at once.

But, then he proceeded to complete the task exactly as she had instructed.  It blew me away.  At home, he would never do anything of the sort.  At home, he draws what he wants when he wants, don't even waste your breath asking him to do a worksheet or draw something specific.  It would just result in a backlash of, "No! you do it." 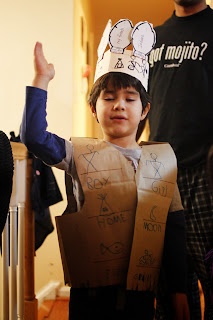 So seeing him siting peacefully in the chair, keeping on task, just knocked my socks off.

Then he asked if he could add a door to the teepee.  The teacher had left the room so I said, "ok."  Then he added a tongue to the snake.  Then, in the very last line on the vest - the last spot for a symbol, he drew something that wasn't one of the 'approved images.'

He didn't ask for permission this time.  I could see it was too late for that.  The creativity inside him begged to escape.  The ideas flowing through his head, visions bursting through the little muscles of his hand, pleading to bleed onto that paper vest.  He'd proven he could complete the task, he'd repressed the desire to cover the vest with symbols for ninjas, monster trucks and angry birds.  Now, at the bottom of the back of the vest, cleverly shaded and camouflaged by the perfectly conformist copies of teacher produced symbols, in a subtle act of creative defiance, he drew a simple stick figure dog.  And under it wrote the word, "DOG" 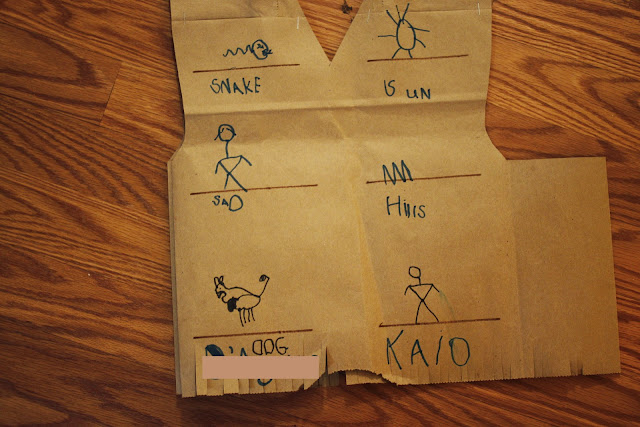 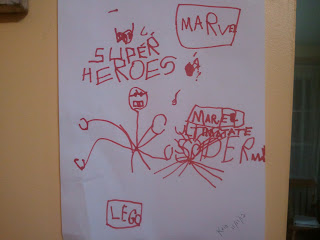