Mariano left Saturday for the US and arrived safely yesterday.  Now life has really slowed down here at his family's home in Belém, Brazil.  Yesterday also marked the final day of the city's two week Catholic festival called Círio.  The tradition is based around a story of the Lady Saint of Nazaré (Nossa Senhora de Nazaré).

The original Nossa Senhora lives in Portugal, but around 1700 a small replica of her was found in Belém by a man walking around the streams in what used to be undeveloped forested Amazonian delta.  He took the little statue back to his house to clean her, when she magically disappeared and reappeared back at the site he had found her.  This occurred multiple times until folks concluded her a divine miracle.  They constructed a basilica in the location; where she now lives on a decorated alter.

That is except for during the main day of Círio, when she makes a symbolic journey across the city from a church in the old town back to her basilica.  Two million people migrate into the city to take part in the procession, and many arrive at 2am to find a space touching the cord that precedes her thrown in the parade.


Some people even make the 3.6km trek on their knees, the ultimate display of gratitude to Nossa Senhora.  These people are always assisted by groups of volunteers paving their pilgrimage with t-shirts or cardboard. 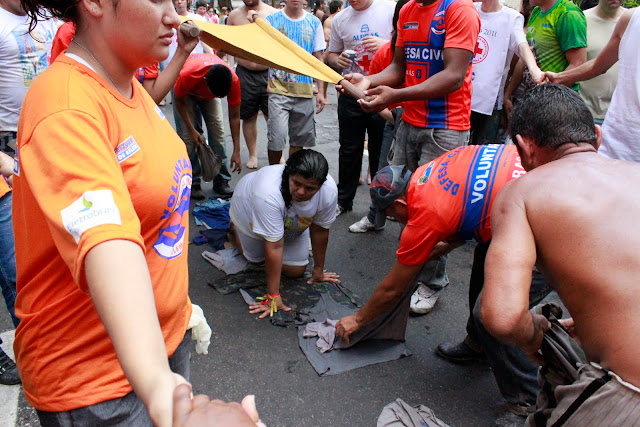 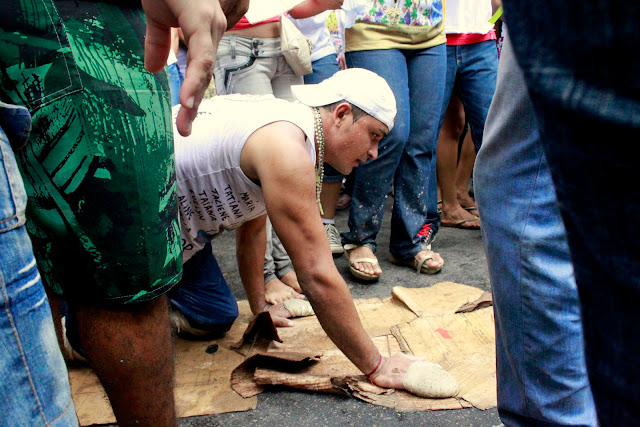 It seems to be a truly cathartic experience for many people.  Plus lots of trash and water bottles to fend off dehydration in the 97degree climate.  Inevitably people pass out from exhaustion and need to be carried out in stretchers.  And here's a shot of the feet.

Then of course, there is food.  Lots of delicious food.  More on that in another post.