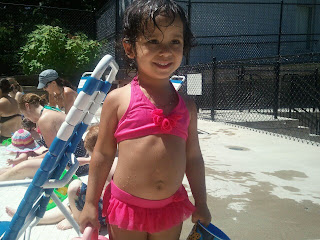 Our fate for the day was sealed the moment I handed Nene the pink tutu bikini, gifted from a friend.  And later on, at the pool, a situation in which  I had no clue how to react confronted us.

I'd met my friend for a morning yoga class and she'd handed me the irresistible, ridiculously girly bathing suit.

Once handed to her, she commenced bouncing on the sofa chair, "to the pool!  to the pool!"

So off we went. 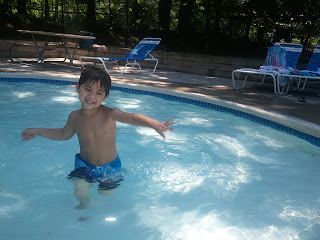 We spent the first hour in the large pool and then at break moved on to the kiddy pool.  I'm pretty laissez-faire about the whole communal toy situation.  I don't force my kids to share toys and I definitely don't expect that other kids will share.  Kaio and Nene know the meaning of "mine" and "theirs" and they know to respect those implications.  Coming from a family that escaped dictatorial communism, I'm satisfied and proud not pushing them to share their possessions.  I think this generally leads to few altercations.  Kaio readily offers his toys to other kids to play with and they trade sometimes.  Luckily, letting the kids negotiate works out pretty well and I don't have to be one of the moms yelling orders from the sidelines.

So, I was hanging out on a beach chair, getting my coconut oil tan on, when Kaio runs over, frantically upset, "He told me to go away! Go tell him not to say that to me!"

Kaio started tugging at me, almost crying.  I hesitated. What should I do?  Should I go get all mama bear on someone else's kid or should I minimize my son's feelings and reaction?
I went with him and told the boy, "that is not a very nice thing to say to someone."
To which the little brat looked at us and shouted, "Go away."
Kaio erupted.  Pleading with me to do something.

I really did not want to go over to his mom and tell her that her son was rude to my son.  But maybe that's what I should have done?  I don't know!  I'm very non-confrontational, as you can tell.  I don't want to break Kaio's sense of justice in the world.  But I don't want to raise issue with another mom over, "go away."

I explained to Kaio it was not nice, and it was an awful thing to say.  Then, a soccer ball toy distracted him for a second... until another kid came and stole that toy from him!  The predicament continued!  That sent him over the edge and he cried. 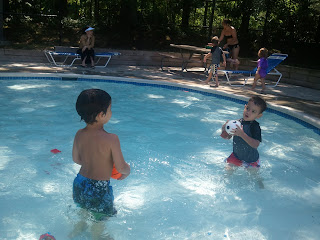 The boy's mom came over and we exchanged notes.  Ok, the ball didn't belong to either of us.  She ended up coaxing her son to return it to Kaio.  Then they started playing together.  She looked at me and said, "That's why I like to stick in the bigger pool, too much drama over here."

Drama!  It's the way of the world.  We better all get used to it.