There is a great self help relationship guide (I know WTF? no really, I liked it) - when I went to Panama with my mom I didn't pack any reading materials and ended up stealing one of her books: How to Love Like a Hot Chick.  It talks about how to enjoy being single, "This may be the last time you are single again, ever!" by thinking about the times as your heyday.  I really liked that perspective, because I think too many girls get so obsessed with completing themselves by finding relationships, rather than enjoying the time and freedom they have before the man and the family.  It's tough because we all want to be loved and snuggle, but this book does a good job of pointing out the fun you can have in the mean time, and how to know if you are in the right relationship or not.  The writing can be awefully crude at times, and it took a bit for even me to get use to, but it is entertaining and right-on.  I picked up the book for a couple of my single friends.
One of the things that the authors recommend to help you to find true love is to tell the universe what kind of man you want and the universe will provide.  It works, it really works.  My friend did as they said and wrote down the traits that her ideal man would have.  After a few months she was dating a guy who met every one of the things and more.  I'm a firm believer because I have heard of it working on many occasions.
Well one of the things that I did while preggy with LittleMan, and again with GirlFriend was make a couple wishes to the universe.  Now I didn't get too specific because I didn't want to be psyco genetically engineering the perfect child Gattaca style.  But there were some modest requests with each kid.  So with LM, I asked for a boy just like Mari.  With GF, I asked for a smart, sweet girl, who listens to what I say.  Ok, so maybe I went overboard with the 'listens to what I say' thing, but you have to understand that I was at a point when LM was just two years old and was running away from me at parks and I would have to chase after him, big belly and all!

The Universe has provided.  When LM was born the very first thought that crossed my mind was, 'he looks just like Mari.'
He has continued to look and act like his daddy.  It's pretty dang cute.  With all the trouble he can be sometimes, I can't be upset at the universe for that, because it gave me what I wished for :).
Then there is GF.  She is such a little smarty pants angel.  This morning she went poo-poo in the toilet all by herself.  It is the fourth consecutive time that she has gone potty in the morning on the toilet.  She is not even a year and a half old yet and she has been asking to sit on the toilet and pee and poop.  Then I got a note from daycare yesterday. They said that during circle time when they asked "What is the weather like outside?"  She was the first to answer, "Rainy."
And when they asked "What season is it?"  She answered "Spring!"
They were so amazed that they wrote me a note and stuck it in her lunch box. 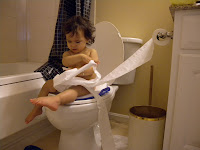 The funny thing is that on the same day that GF poops in the toilet, LM has an accident in his underpants.  At this rate she may be potty trained before he is.  It's funny because Mari said that it took him forever to get fully potty trained, like until he was 5 years old, and that is even while growing up with cloth diapers!  He still remembers having accidents in his pants.
So I think that I may have gotten my modest wishes.  Thank you Universe.
at 11:18 PM