A friend told me that she started feeling like a parent when her and her husband took their daughter to the pediatrician for the first time.  For me, it's the night before Christmas.  As Mari and I tiptoe around the creaking floors, holding freshly wrapped presents and quietly placing them under the tree, that's when it really hits me.  Then, the rest of the year I mostly feel like a kid still.

This year the kids wanted to camp out by the tree to try to catch a glimpse of Santa.  As I tucked them in (Mari was working late that night), they told me about how Santa would take them back to the North Pole to see his workshop.  I said, "No, don't go with Santa, I'll miss you too much."
"But, we'll come back!" They assured me.

Usually the living room's illuminated brightly and full of activity.  But in prepping for bed we turned out the main lights.  Only multicolored Christmas lights twinkled magically and the space felt still, Beegie Adair played in the background.  Seeing the kids wrapped in cotton and fleece blankets, I felt it was true; I would miss them too much if they went with Santa to the North Pole.  I didn't want them to go. 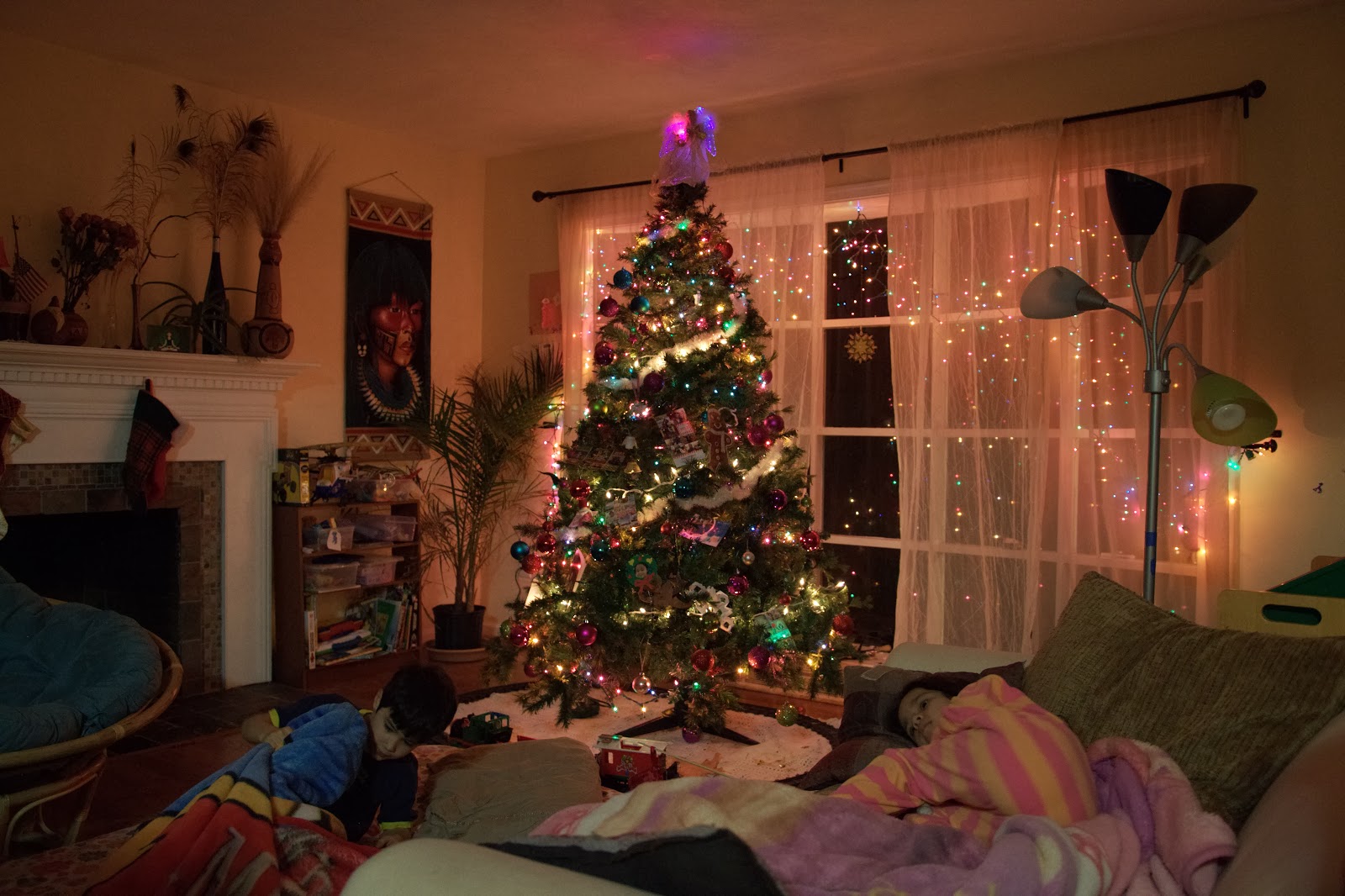 We didn't exactly plan to be parents.  I mean, I understand how it works and so I knew it was possible.  It didn't come as a complete surprise.  But we never sat down together and looked at our financials, had a conversation, and then started 'trying.'   I'm super impressed (and a little weirded out) by the parents who have college accounts opened when their kids are in the womb.

No, Mari and I were living in a 6'x6' bedroom in a shared 2 bed/1.5bath apartment in Mount Pleasant, DC, making $11 an hour washing towels for a cleaning company.  My bestfriend roommate was more than a little relieved when I told her we were expecting because it meant we wouldn't be making so much noise partying late at night anymore.  In six months or so we moved out completely and into my mom's house, which was closer to both our Virginia jobs at the time.  Living in DC just didn't seem so glamorous (is it ever?) with an hour commute and baby on the way.

So when Kaio was born we were just living in the suburbs - in a little bedroom, next to my mom and above my grandfather.  Four generations all in one 2500 square ft house.  Mari finally had a white collar job and so did I.  We saved all our money up to pay for a trip to Brazil while I was on Maternity leave.  We also decided to have a real wedding ceremony down there (since before we had only signed the marriage certificate at the courthouse).  Mari's real job was a temp position, helping move international telecom jobs to Poland.  We knew it was ending and so it seemed like the perfect time for a long trip to Brazil.   While we were down there my contract abruptly and surprisingly ended - on maternity leave.  So, really, neither of us had a job or health insurance for the first few months after Kaio was born!  It seemed almost futile to return to The States.  But we did anyway.

I didn't really know what I was doing as a mom.  I picked up a parenting book at my midwife's office.  It suggested letting the baby cry it out as a solution to getting a good night sleep.  I told Mari about it and we decided to try.  Kaio had originally sleep in bed with us the first month, but when we returned from Brazil my friend had given us her crib that her father built for her as a baby.  The railing wasn't FSA approved but -whatever.  We put Kaio to sleep in the bed and let him cry it out.  That damn book had convinced me this was a good idea.  I was so naive to trust this book just because it was in the midwife's office.

In the middle of the night I heard some noise from his bedroom and decided to check in.  I could hear Tata inside.  He must have walked upstairs following the crying.  I open the door and there is Tata, sitting in a desk chair by the crib, holding baby Kaio like an angel in his arms saying, "Nu Plange Mikey."  (don't cry Mikey).  Little Kaio stared up at him with serenity, completely calm and transfixed on Tata's gaze.

I can't believe this 90yr old 90lb man with dementia could lean over and pick up the plump breast fed 20lb baby out of the crib.  He called him Mikey, because he thought he was my brother as a baby.  If my brother was in the same room, he'd still call Kaio 'Mikey.'

Although the moment was heart warming, it scared Mari.  He didn't want to worry about Tata dropping or moving Kaio in the middle of the night.  We decided to get our own place.

I wish I hadn't looked for a job and gone to work.  I wish I had stayed home with Kaio.  We didn't really need that health insurance, although at the time it was my main driver for finding employment.  Mari landed another temp position, and then we bought a house, and the temp position ended.  So only I was employed when we signed the title papers for our new house!

But things always worked out for us.  He found a job within a month.  The next job was a temp to hire position, and he's been well off ever since.

It's not that I totally regret going back to work.  It did serve a purpose.  We wouldn't have been able to buy a house, we wouldn't have been able to accrue the savings I used to pay for yoga teacher training and am using to pay for acupuncture school now.  So It's good in that respect.  But I don't think it was the best choice for the kids.  I wish I could have been around for them more, and been more in tune with Kaio's needs as a toddler specifically.

Yes, we moved back into my mom's house.  After Tata passed away she started renting out her basement.  But she was having issue after issue with her tenants.  We were looking at ways to save money after Nala was born as we had a second daycare expense and second car expense.  It seemed like the right thing to do at the time, and I don't think we considered it a permanent solution, but it has become one.  She's a huge help and the kids love her.   I love that the kids wake up some mornings and go cuddle with her in bed.  I love an inter-generational house and us being around to help each other out.

I'd love it if you'd share.  When was the point you started feeling like an adult/parent?
at 10:24 PM