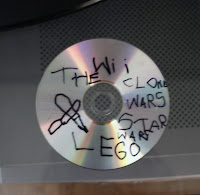 Kaio's been asking for a new video game for our wii console.  Well, a couple days ago he asked for a blank CD, and took a sharpee out to write on it.  After finishing writing, he walked over to the wii and popped the baby in.  If life were a cartoon, this would have totally worked.
But it didn't work, and my poor kid's disappointment was unbearable to watch.  I had no satisfying explanation for why it wouldn't work.  And part of that is my approach to life and parenting in general.  I'm reluctant to explain life, because I truly believe that our concept of reality gets in the way of our potential.  It's like the miraculous placebo effect.  The power of believe goes a long way in making something possible.
So my boy sat there pouting, trying to troubleshoot the problem, "Do I need to draw the characters on the disk?"

I went on amazon and bought him the game.  It was only $6. 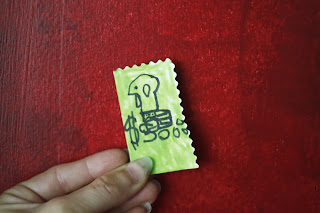 He's also been asking for a Lego Republic Gunship set.  It costs $500.  I told him we could try selling some of his toys, or he could make something to sell to cover the cost.  His response, "No, I don't want to sell things, I'm making my own money, I'm making my own government."  Then he made his own money, with Barack Obama and the American Flag:

Similar thing happened when we saw a deer in our yard and he wanted to go hunt it.  I told him that he would need a hunting license first.  His response, "Here's my hunting license."

I don't know where this subversive behavior is going, but I bet he'll be in the pack of people shopping with bitcoins and raising quails without permission from the county ;)
at 7:34 PM